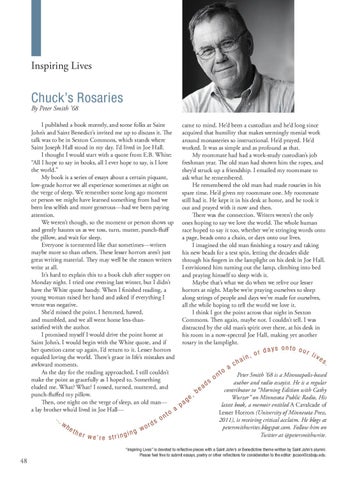 I published a book recently, and some folks at Saint John’s and Saint Benedict’s invited me up to discuss it. The talk was to be in Sexton Commons, which stands where Saint Joseph Hall stood in my day. I’d lived in Joe Hall. I thought I would start with a quote from E.B. White: “All I hope to say in books, all I ever hope to say, is I love the world.” My book is a series of essays about a certain piquant, low-grade horror we all experience sometimes at night on the verge of sleep. We remember some long ago moment or person we might have learned something from had we been less selfish and more generous—had we been paying attention. We weren’t though, so the moment or person shows up and gently haunts us as we toss, turn, mutter, punch-fluff the pillow, and wait for sleep. Everyone is tormented like that sometimes—writers maybe more so than others. These lesser horrors aren’t just great writing material. They may well be the reason writers write at all. It’s hard to explain this to a book club after supper on Monday night. I tried one evening last winter, but I didn’t have the White quote handy. When I finished reading, a young woman raised her hand and asked if everything I wrote was negative. She’d missed the point. I hemmed, hawed, and mumbled, and we all went home less-thansatisfied with the author. I promised myself I would drive the point home at Saint John’s. I would begin with the White quote, and if her question came up again, I’d return to it. Lesser horrors equaled loving the world. There’s grace in life’s mistakes and awkward moments. As the day for the reading approached, I still couldn’t make the point as gracefully as I hoped to. Something eluded me. What? What? I tossed, turned, muttered, and punch-fluffed my pillow. Then, one night on the verge of sleep, an old man— a a lay brother who’d lived in Joe Hall—

came to mind. He’d been a custodian and he’d long since acquired that humility that makes seemingly menial work around monasteries so instructional. He’d prayed. He’d worked. It was as simple and as profound as that. My roommate had had a work-study custodian’s job freshman year. The old man had shown him the ropes, and they’d struck up a friendship. I emailed my roommate to ask what he remembered. He remembered the old man had made rosaries in his spare time. He’d given my roommate one. My roommate still had it. He kept it in his desk at home, and he took it out and prayed with it now and then. There was the connection. Writers weren’t the only ones hoping to say we love the world. The whole human race hoped to say it too, whether we’re stringing words onto a page, beads onto a chain, or days onto our lives. I imagined the old man finishing a rosary and taking his new beads for a test spin, letting the decades slide through his fingers in the lamplight on his desk in Joe Hall. I envisioned him turning out the lamp, climbing into bed and praying himself to sleep with it. Maybe that’s what we do when we relive our lesser horrors at night. Maybe we’re praying ourselves to sleep along strings of people and days we’ve made for ourselves, all the while hoping to tell the world we love it. I think I got the point across that night in Sexton Commons. Then again, maybe not. I couldn’t tell. I was distracted by the old man’s spirit over there, at his desk in his room in a now-spectral Joe Hall, making yet another rosary in the lamplight.

Peter Smith ’68 is a Minneapolis-based author and radio essayist. He is a regular contributor to “Morning Edition with Cathy Wurzer” on Minnesota Public Radio, His latest book, a memoir entitled A Cavalcade of Lesser Horrors (University of Minnesota Press, 2011), is receiving critical acclaim. He blogs at petersmithwrites.blogspot.com. Follow him on Twitter at @petersmithwrite.

“Inspiring Lives” is devoted to reflective pieces with a Saint John’s or Benedictine theme written by Saint John’s alumni. Please feel free to submit essays, poetry or other reflections for consideration to the editor: jscoon@csbsju.edu.