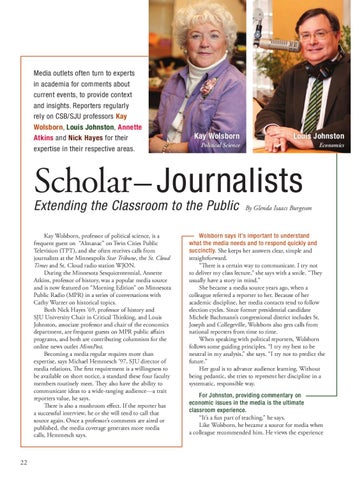 Media outlets often turn to experts in academia for comments about current events, to provide context and insights. Reporters regularly rely on CSB/SJU professors Kay Wolsborn, Louis Johnston, Annette Atkins and Nick Hayes for their expertise in their respective areas.

Scholar – Journalists Extending the Classroom to the Public Kay Wolsborn, professor of political science, is a frequent guest on “Almanac” on Twin Cities Public Television (TPT), and she often receives calls from journalists at the Minneapolis Star Tribune, the St. Cloud Times and St. Cloud radio station WJON. During the Minnesota Sesquicentennial, Annette Atkins, professor of history, was a popular media source and is now featured on “Morning Edition” on Minnesota Public Radio (MPR) in a series of conversations with Cathy Wurzer on historical topics. Both Nick Hayes ’69, professor of history and SJU University Chair in Critical Thinking, and Louis Johnston, associate professor and chair of the economics department, are frequent guests on MPR public affairs programs, and both are contributing columnists for the online news outlet MinnPost. Becoming a media regular requires more than expertise, says Michael Hemmesch ’97, SJU director of media relations. The first requirement is a willingness to be available on short notice, a standard these four faculty members routinely meet. They also have the ability to communicate ideas to a wide-ranging audience—a trait reporters value, he says. There is also a mushroom effect. If the reporter has a successful interview, he or she will tend to call that source again. Once a professor’s comments are aired or published, the media coverage generates more media calls, Hemmesch says.

Wolsborn says it’s important to understand what the media needs and to respond quickly and succinctly. She keeps her answers clear, simple and straightforward. “There is a certain way to communicate. I try not to deliver my class lecture,” she says with a smile. “They usually have a story in mind.” She became a media source years ago, when a colleague referred a reporter to her. Because of her academic discipline, her media contacts tend to follow election cycles. Since former presidential candidate Michele Bachmann’s congressional district includes St. Joseph and Collegeville, Wolsborn also gets calls from national reporters from time to time. When speaking with political reporters, Wolsborn follows some guiding principles. “I try my best to be neutral in my analysis,” she says. “I try not to predict the future.” Her goal is to advance audience learning. Without being pedantic, she tries to represent her discipline in a systematic, responsible way. For Johnston, providing commentary on economic issues in the media is the ultimate classroom experience. “It’s a fun part of teaching,” he says. Like Wolsborn, he became a source for media when a colleague recommended him. He views the experience