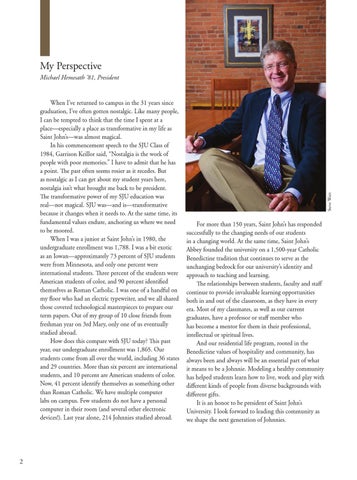 My Perspective When I’ve returned to campus in the 31 years since graduation, I’ve often gotten nostalgic. Like many people, I can be tempted to think that the time I spent at a place—especially a place as transformative in my life as Saint John’s—was almost magical. In his commencement speech to the SJU Class of 1984, Garrison Keillor said, “Nostalgia is the work of people with poor memories.” I have to admit that he has a point. The past often seems rosier as it recedes. But as nostalgic as I can get about my student years here, nostalgia isn’t what brought me back to be president. The transformative power of my SJU education was real—not magical. SJU was—and is—transformative because it changes when it needs to. At the same time, its fundamental values endure, anchoring us where we need to be moored. When I was a junior at Saint John’s in 1980, the undergraduate enrollment was 1,788. I was a bit exotic as an Iowan—approximately 73 percent of SJU students were from Minnesota, and only one percent were international students. Three percent of the students were American students of color, and 90 percent identified themselves as Roman Catholic. I was one of a handful on my floor who had an electric typewriter, and we all shared those coveted technological masterpieces to prepare our term papers. Out of my group of 10 close friends from freshman year on 3rd Mary, only one of us eventually studied abroad. How does this compare with SJU today? This past year, our undergraduate enrollment was 1,865. Our students come from all over the world, including 36 states and 29 countries. More than six percent are international students, and 10 percent are American students of color. Now, 41 percent identify themselves as something other than Roman Catholic. We have multiple computer labs on campus. Few students do not have a personal computer in their room (and several other electronic devices!). Last year alone, 214 Johnnies studied abroad.

For more than 150 years, Saint John’s has responded successfully to the changing needs of our students in a changing world. At the same time, Saint John’s Abbey founded the university on a 1,500-year Catholic Benedictine tradition that continues to serve as the unchanging bedrock for our university’s identity and approach to teaching and learning. The relationships between students, faculty and staff continue to provide invaluable learning opportunities both in and out of the classroom, as they have in every era. Most of my classmates, as well as our current graduates, have a professor or staff member who has become a mentor for them in their professional, intellectual or spiritual lives. And our residential life program, rooted in the Benedictine values of hospitality and community, has always been and always will be an essential part of what it means to be a Johnnie. Modeling a healthy community has helped students learn how to live, work and play with different kinds of people from diverse backgrounds with different gifts. It is an honor to be president of Saint John’s University. I look forward to leading this community as we shape the next generation of Johnnies.