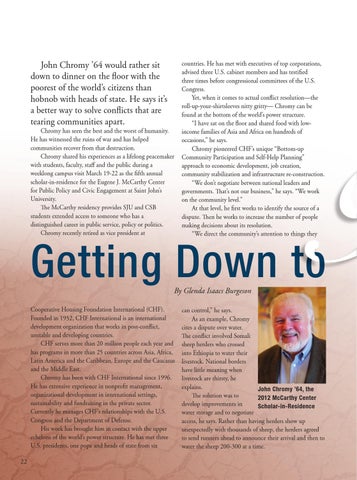 John Chromy ’64 would rather sit down to dinner on the floor with the poorest of the world’s citizens than hobnob with heads of state. He says it’s a better way to solve conflicts that are tearing communities apart.

Chromy has seen the best and the worst of humanity. He has witnessed the ruins of war and has helped communities recover from that destruction. Chromy shared his experiences as a lifelong peacemaker with students, faculty, staff and the public during a weeklong campus visit March 19-22 as the fifth annual scholar-in-residence for the Eugene J. McCarthy Center for Public Policy and Civic Engagement at Saint John’s University. The McCarthy residency provides SJU and CSB students extended access to someone who has a distinguished career in public service, policy or politics. Chromy recently retired as vice president at

countries. He has met with executives of top corporations, advised three U.S. cabinet members and has testified three times before congressional committees of the U.S. Congress. Yet, when it comes to actual conflict resolution—the roll-up-your-shirtsleeves nitty gritty— Chromy can be found at the bottom of the world’s power structure. “I have sat on the floor and shared food with lowincome families of Asia and Africa on hundreds of occasions,” he says. Chromy pioneered CHF’s unique “Bottom-up Community Participation and Self-Help Planning” approach to economic development, job creation, community stabilization and infrastructure re-construction. “We don’t negotiate between national leaders and governments. That’s not our business,” he says. “We work on the community level.” At that level, he first works to identify the source of a dispute. Then he works to increase the number of people making decisions about its resolution. “We direct the community’s attention to things they

Getting Down to By Glenda Isaacs Burgeson

Cooperative Housing Foundation International (CHF). Founded in 1952, CHF International is an international development organization that works in post-conflict, unstable and developing countries. CHF serves more than 20 million people each year and has programs in more than 25 countries across Asia, Africa, Latin America and the Caribbean, Europe and the Caucasus and the Middle East. Chromy has been with CHF International since 1996. He has extensive experience in nonprofit management, organizational development in international settings, sustainability and fundraising in the private sector. Currently he manages CHF’s relationships with the U.S. Congress and the Department of Defense. His work has brought him in contact with the upper echelons of the world’s power structure. He has met three U.S. presidents, one pope and heads of state from six

can control,” he says. As an example, Chromy cites a dispute over water. The conflict involved Somali sheep herders who crossed into Ethiopia to water their livestock. National borders have little meaning when livestock are thirsty, he explains. John Chromy ’64, the The solution was to 2012 McCarthy Center develop improvements in Scholar-in-Residence water storage and to negotiate access, he says. Rather than having herders show up unexpectedly with thousands of sheep, the herders agreed to send runners ahead to announce their arrival and then to water the sheep 200-300 at a time.