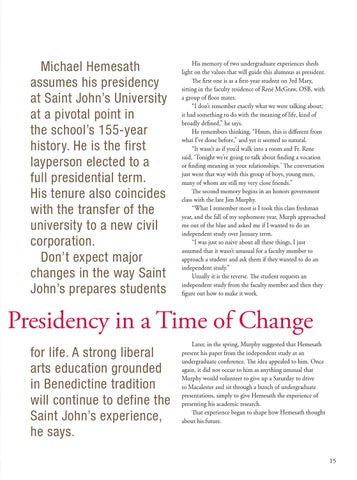 Michael Hemesath assumes his presidency at Saint John’s University at a pivotal point in the school’s 155-year history. He is the first layperson elected to a full presidential term. His tenure also coincides with the transfer of the university to a new civil corporation. Don’t expect major changes in the way Saint John’s prepares students

His memory of two undergraduate experiences sheds light on the values that will guide this alumnus as president. The first one is as a first-year student on 3rd Mary, sitting in the faculty residence of René McGraw, OSB, with a group of floor mates. “I don’t remember exactly what we were talking about; it had something to do with the meaning of life, kind of broadly defined,” he says. He remembers thinking, “Hmm, this is different from what I’ve done before,” and yet it seemed so natural. “It wasn’t as if you’d walk into a room and Fr. Rene said, ‘Tonight we’re going to talk about finding a vocation or finding meaning in your relationships.’ The conversation just went that way with this group of boys, young men, many of whom are still my very close friends.” The second memory begins in an honors government class with the late Jim Murphy. “What I remember most is I took this class freshman year, and the fall of my sophomore year, Murph approached me out of the blue and asked me if I wanted to do an independent study over January term. “I was just so naive about all these things, I just assumed that it wasn’t unusual for a faculty member to approach a student and ask them if they wanted to do an independent study.” Usually it is the reverse. The student requests an independent study from the faculty member and then they figure out how to make it work.

Presidency in a Time of Change for life. A strong liberal arts education grounded in Benedictine tradition will continue to define the Saint John’s experience, he says.

Later, in the spring, Murphy suggested that Hemesath present his paper from the independent study at an undergraduate conference. The idea appealed to him. Once again, it did not occur to him as anything unusual that Murphy would volunteer to give up a Saturday to drive to Macalester and sit through a bunch of undergraduate presentations, simply to give Hemesath the experience of presenting his academic research. That experience began to shape how Hemesath thought about his future.