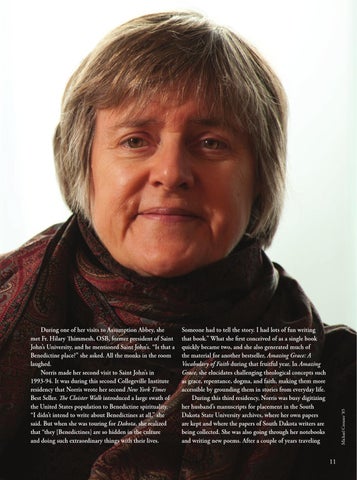 Someone had to tell the story. I had lots of fun writing that book.” What she first conceived of as a single book quickly became two, and she also generated much of the material for another bestseller, Amazing Grace: A Vocabulary of Faith during that fruitful year. In Amazing Grace, she elucidates challenging theological concepts such as grace, repentance, dogma, and faith, making them more accessible by grounding them in stories from everyday life. During this third residency, Norris was busy digitizing her husband’s manuscripts for placement in the South Dakota State University archives, where her own papers are kept and where the papers of South Dakota writers are being collected. She was also going through her notebooks and writing new poems. After a couple of years traveling

During one of her visits to Assumption Abbey, she met Fr. Hilary Thimmesh, OSB, former president of Saint John’s University, and he mentioned Saint John’s. “Is that a Benedictine place?” she asked. All the monks in the room laughed. Norris made her second visit to Saint John’s in 1993-94. It was during this second Collegeville Institute residency that Norris wrote her second New York Times Best Seller. The Cloister Walk introduced a large swath of the United States population to Benedictine spirituality. “I didn’t intend to write about Benedictines at all,” she said. But when she was touring for Dakota, she realized that “they [Benedictines] are so hidden in the culture and doing such extraordinary things with their lives.