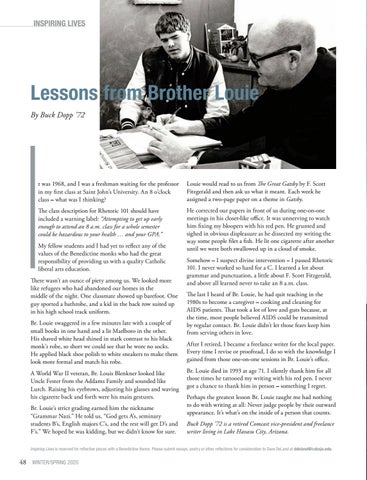 t was 1968, and I was a freshman waiting for the professor in my first class at Saint John’s University. An 8 o’clock class – what was I thinking?

Louie would read to us from The Great Gatsby by F. Scott Fitzgerald and then ask us what it meant. Each week he assigned a two-page paper on a theme in Gatsby.

The class description for Rhetoric 101 should have included a warning label: “Attempting to get up early enough to attend an 8 a.m. class for a whole semester could be hazardous to your health … and your GPA.”

He corrected our papers in front of us during one-on-one meetings in his closet-like office. It was unnerving to watch him fixing my bloopers with his red pen. He grunted and sighed in obvious displeasure as he dissected my writing the way some people filet a fish. He lit one cigarette after another until we were both swallowed up in a cloud of smoke.

My fellow students and I had yet to reflect any of the values of the Benedictine monks who had the great responsibility of providing us with a quality Catholic liberal arts education. There wasn’t an ounce of piety among us. We looked more like refugees who had abandoned our homes in the middle of the night. One classmate showed up barefoot. One guy sported a bathrobe, and a kid in the back row suited up in his high school track uniform. Br. Louie swaggered in a few minutes late with a couple of small books in one hand and a lit Marlboro in the other. His shaved white head shined in stark contrast to his black monk’s robe, so short we could see that he wore no socks. He applied black shoe polish to white sneakers to make them look more formal and match his robe. A World War II veteran, Br. Louis Blenkner looked like Uncle Fester from the Addams Family and sounded like Lurch. Raising his eyebrows, adjusting his glasses and waving his cigarette back and forth were his main gestures. Br. Louie’s strict grading earned him the nickname “Grammar Nazi.” He told us, “God gets A’s, seminary students B’s, English majors C’s, and the rest will get D’s and F’s.” We hoped he was kidding, but we didn’t know for sure.

Somehow – I suspect divine intervention – I passed Rhetoric 101. I never worked so hard for a C. I learned a lot about grammar and punctuation, a little about F. Scott Fitzgerald, and above all learned never to take an 8 a.m. class. The last I heard of Br. Louie, he had quit teaching in the 1980s to become a caregiver – cooking and cleaning for AIDS patients. That took a lot of love and guts because, at the time, most people believed AIDS could be transmitted by regular contact. Br. Louie didn’t let those fears keep him from serving others in love. After I retired, I became a freelance writer for the local paper. Every time I revise or proofread, I do so with the knowledge I gained from those one-on-one sessions in Br. Louie’s office. Br. Louie died in 1993 at age 71. I silently thank him for all those times he tattooed my writing with his red pen. I never got a chance to thank him in person – something I regret. Perhaps the greatest lesson Br. Louie taught me had nothing to do with writing at all: Never judge people by their outward appearance. It’s what’s on the inside of a person that counts. Buck Dopp ’72 is a retired Comcast vice-president and freelance writer living in Lake Havasu City, Arizona.

Inspiring Lives is reserved for reflective pieces with a Benedictine theme. Please submit essays, poetry or other reflections for consideration to Dave DeLand at ddeland@csbsju.edu.