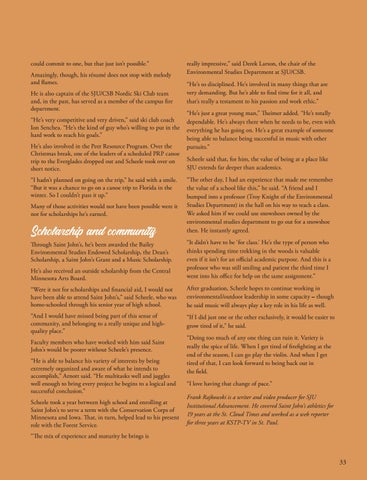 could commit to one, but that just isn’t possible.” Amazingly, though, his résumé does not stop with melody and flames. He is also captain of the SJU/CSB Nordic Ski Club team and, in the past, has served as a member of the campus fire department. “He’s very competitive and very driven,” said ski club coach Ion Senchea. “He’s the kind of guy who’s willing to put in the hard work to reach his goals.” He’s also involved in the Peer Resource Program. Over the Christmas break, one of the leaders of a scheduled PRP canoe trip to the Everglades dropped out and Scheele took over on short notice. “I hadn’t planned on going on the trip,” he said with a smile. “But it was a chance to go on a canoe trip to Florida in the winter. So I couldn’t pass it up.” Many of those activities would not have been possible were it not for scholarships he’s earned.

really impressive,” said Derek Larson, the chair of the Environmental Studies Department at SJU/CSB. “He’s so disciplined. He’s involved in many things that are very demanding. But he’s able to find time for it all, and that’s really a testament to his passion and work ethic.” “He’s just a great young man,” Theimer added. “He’s totally dependable. He’s always there when he needs to be, even with everything he has going on. He’s a great example of someone being able to balance being successful in music with other pursuits.” Scheele said that, for him, the value of being at a place like SJU extends far deeper than academics. “The other day, I had an experience that made me remember the value of a school like this,” he said. “A friend and I bumped into a professor (Troy Knight of the Environmental Studies Department) in the hall on his way to teach a class. We asked him if we could use snowshoes owned by the environmental studies department to go out for a snowshoe then. He instantly agreed.

He’s also received an outside scholarship from the Central Minnesota Arts Board.

“It didn’t have to be ‘for class.’ He’s the type of person who thinks spending time trekking in the woods is valuable even if it isn’t for an official academic purpose. And this is a professor who was still smiling and patient the third time I went into his office for help on the same assignment.”

“Were it not for scholarships and financial aid, I would not have been able to attend Saint John’s,” said Scheele, who was home-schooled through his senior year of high school.

After graduation, Scheele hopes to continue working in environmental/outdoor leadership in some capacity – though he said music will always play a key role in his life as well.

“And I would have missed being part of this sense of community, and belonging to a really unique and highquality place.”

“If I did just one or the other exclusively, it would be easier to grow tired of it,” he said.

Faculty members who have worked with him said Saint John’s would be poorer without Scheele’s presence. “He is able to balance his variety of interests by being extremely organized and aware of what he intends to accomplish,” Arnott said. “He multitasks well and juggles well enough to bring every project he begins to a logical and successful conclusion.” Scheele took a year between high school and enrolling at Saint John’s to serve a term with the Conservation Corps of Minnesota and Iowa. That, in turn, helped lead to his present role with the Forest Service.

“Doing too much of any one thing can ruin it. Variety is really the spice of life. When I get tired of firefighting at the end of the season, I can go play the violin. And when I get tired of that, I can look forward to being back out in the field. “I love having that change of pace.” Frank Rajkowski is a writer and video producer for SJU Institutional Advancement. He covered Saint John’s athletics for 19 years at the St. Cloud Times and worked as a web reporter for three years at KSTP-TV in St. Paul.

“The mix of experience and maturity he brings is