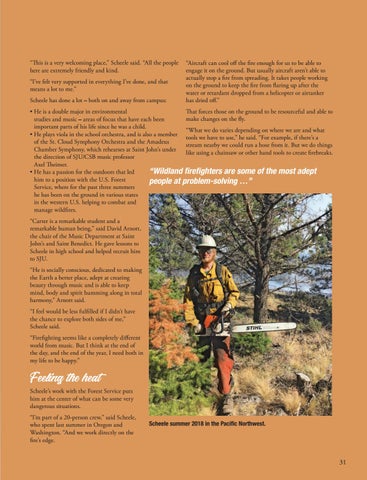 “This is a very welcoming place,” Scheele said. “All the people here are extremely friendly and kind. “I’ve felt very supported in everything I’ve done, and that means a lot to me.” Scheele has done a lot – both on and away from campus:

“Aircraft can cool off the fire enough for us to be able to engage it on the ground. But usually aircraft aren’t able to actually stop a fire from spreading. It takes people working on the ground to keep the fire from flaring up after the water or retardant dropped from a helicopter or airtanker has dried off.”

That forces those on the ground to be resourceful and able to • He is a double major in environmental make changes on the fly. studies and music – areas of focus that have each been important parts of his life since he was a child. “What we do varies depending on where we are and what • He plays viola in the school orchestra, and is also a member tools we have to use,” he said. “For example, if there’s a of the St. Cloud Symphony Orchestra and the Amadeus stream nearby we could run a hose from it. But we do things Chamber Symphony, which rehearses at Saint John’s under like using a chainsaw or other hand tools to create firebreaks. the direction of SJU/CSB music professor Axel Theimer. “Wildland firefighters are some of the most adept • He has a passion for the outdoors that led him to a position with the U.S. Forest people at problem-solving …” Service, where for the past three summers he has been on the ground in various states in the western U.S. helping to combat and manage wildfires. “Carter is a remarkable student and a remarkable human being,” said David Arnott, the chair of the Music Department at Saint John’s and Saint Benedict. He gave lessons to Scheele in high school and helped recruit him to SJU. “He is socially conscious, dedicated to making the Earth a better place, adept at creating beauty through music and is able to keep mind, body and spirit humming along in total harmony,” Arnott said. “I feel would be less fulfilled if I didn’t have the chance to explore both sides of me,” Scheele said. “Firefighting seems like a completely different world from music. But I think at the end of the day, and the end of the year, I need both in my life to be happy.”

Feeling the heat Scheele’s work with the Forest Service puts him at the center of what can be some very dangerous situations. “I’m part of a 20-person crew,” said Scheele, who spent last summer in Oregon and Washington. “And we work directly on the fire’s edge.

Scheele summer 2018 in the Pacific Northwest.