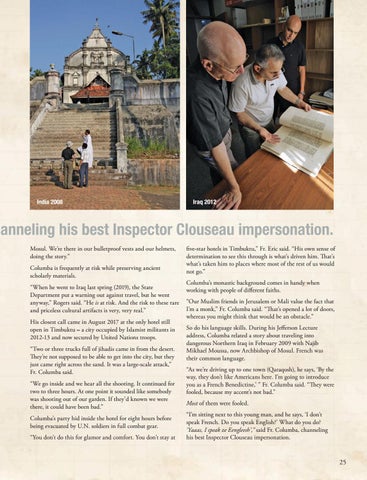 anneling his best Inspector Clouseau impersonation. Mosul. We’re there in our bulletproof vests and our helmets, doing the story.” Columba is frequently at risk while preserving ancient scholarly materials. “When he went to Iraq last spring (2019), the State Department put a warning out against travel, but he went anyway,” Rogers said. “He is at risk. And the risk to these rare and priceless cultural artifacts is very, very real.” His closest call came in August 2017 at the only hotel still open in Timbuktu – a city occupied by Islamist militants in 2012-13 and now secured by United Nations troops. “Two or three trucks full of jihadis came in from the desert. They’re not supposed to be able to get into the city, but they just came right across the sand. It was a large-scale attack,” Fr. Columba said. “We go inside and we hear all the shooting. It continued for two to three hours. At one point it sounded like somebody was shooting out of our garden. If they’d known we were there, it could have been bad.” Columba’s party hid inside the hotel for eight hours before being evacuated by U.N. soldiers in full combat gear. “You don’t do this for glamor and comfort. You don’t stay at

five-star hotels in Timbuktu,” Fr. Eric said. “His own sense of determination to see this through is what’s driven him. That’s what’s taken him to places where most of the rest of us would not go.” Columba’s monastic background comes in handy when working with people of different faiths. “Our Muslim friends in Jerusalem or Mali value the fact that I’m a monk,” Fr. Columba said. “That’s opened a lot of doors, whereas you might think that would be an obstacle.” So do his language skills. During his Jefferson Lecture address, Columba related a story about traveling into dangerous Northern Iraq in February 2009 with Najib Mikhael Moussa, now Archbishop of Mosul. French was their common language. “As we’re driving up to one town (Qaraqosh), he says, ‘By the way, they don’t like Americans here. I’m going to introduce you as a French Benedictine,’ ” Fr. Columba said. “They were fooled, because my accent’s not bad.” Most of them were fooled. “I’m sitting next to this young man, and he says, ‘I don’t speak French. Do you speak English?’ What do you do? ‘Yaaas, I speak ze Eengleesh’,” said Fr. Columba, channeling his best Inspector Clouseau impersonation.