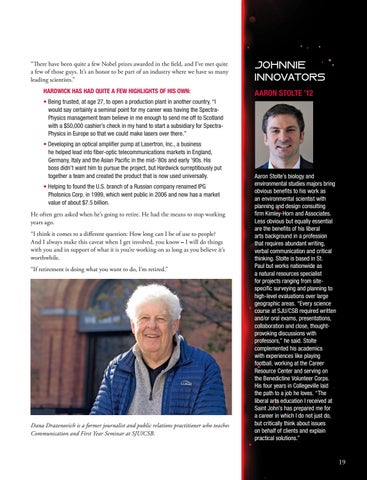 “There have been quite a few Nobel prizes awarded in the field, and I’ve met quite a few of those guys. It’s an honor to be part of an industry where we have so many leading scientists.” HARDWICK HAS HAD QUITE A FEW HIGHLIGHTS OF HIS OWN:

• Being trusted, at age 27, to open a production plant in another country. “I would say certainly a seminal point for my career was having the SpectraPhysics management team believe in me enough to send me off to Scotland with a $50,000 cashier’s check in my hand to start a subsidiary for SpectraPhysics in Europe so that we could make lasers over there.” • Developing an optical amplifier pump at Lasertron, Inc., a business he helped lead into fiber-optic telecommunications markets in England, Germany, Italy and the Asian Pacific in the mid-’80s and early ’90s. His boss didn’t want him to pursue the project, but Hardwick surreptitiously put together a team and created the product that is now used universally. • Helping to found the U.S. branch of a Russian company renamed IPG Photonics Corp. in 1999, which went public in 2006 and now has a market value of about $7.5 billion. He often gets asked when he’s going to retire. He had the means to stop working years ago. “I think it comes to a different question: How long can I be of use to people? And I always make this caveat when I get involved, you know – I will do things with you and in support of what it is you’re working on as long as you believe it’s worthwhile. “If retirement is doing what you want to do, I’m retired.”

Dana Drazenovich is a former journalist and public relations practitioner who teaches Communication and First Year Seminar at SJU/CSB.

Aaron Stolte’s biology and environmental studies majors bring obvious benefits to his work as an environmental scientist with planning and design consulting firm Kimley-Horn and Associates. Less obvious but equally essential are the benefits of his liberal arts background in a profession that requires abundant writing, verbal communication and critical thinking. Stolte is based in St. Paul but works nationwide as a natural resources specialist for projects ranging from sitespecific surveying and planning to high-level evaluations over large geographic areas. “Every science course at SJU/CSB required written and/or oral exams, presentations, collaboration and close, thoughtprovoking discussions with professors,” he said. Stolte complemented his academics with experiences like playing football, working at the Career Resource Center and serving on the Benedictine Volunteer Corps. His four years in Collegeville laid the path to a job he loves. “The liberal arts education I received at Saint John’s has prepared me for a career in which I do not just do, but critically think about issues on behalf of clients and explain practical solutions.”