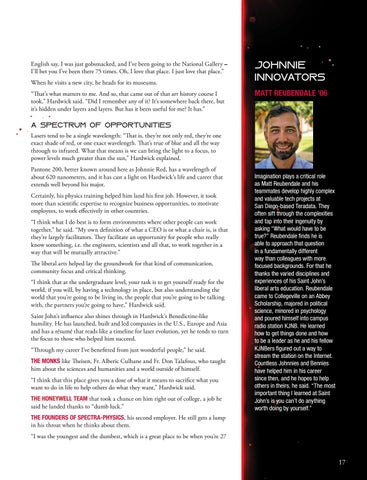 English say, I was just gobsmacked, and I’ve been going to the National Gallery – I’ll bet you I’ve been there 75 times. Oh, I love that place. I just love that place.” When he visits a new city, he heads for its museums. “That’s what matters to me. And so, that came out of that art history course I took,” Hardwick said. “Did I remember any of it? It’s somewhere back there, but it’s hidden under layers and layers. But has it been useful for me? It has.”

A spectrum of opportunities Lasers tend to be a single wavelength: “That is, they’re not only red, they’re one exact shade of red, or one exact wavelength. That’s true of blue and all the way through to infrared. What that means is we can bring the light to a focus, to power levels much greater than the sun,” Hardwick explained. Pantone 200, better known around here as Johnnie Red, has a wavelength of about 620 nanometers, and it has cast a light on Hardwick’s life and career that extends well beyond his major. Certainly, his physics training helped him land his first job. However, it took more than scientific expertise to recognize business opportunities, to motivate employees, to work effectively in other countries. “I think what I do best is to form environments where other people can work together,” he said. “My own definition of what a CEO is or what a chair is, is that they’re largely facilitators. They facilitate an opportunity for people who really know something, i.e. the engineers, scientists and all that, to work together in a way that will be mutually attractive.” The liberal arts helped lay the groundwork for that kind of communication, community focus and critical thinking. “I think that at the undergraduate level, your task is to get yourself ready for the world, if you will, by having a technology in place, but also understanding the world that you’re going to be living in, the people that you’re going to be talking with, the partners you’re going to have,” Hardwick said. Saint John’s influence also shines through in Hardwick’s Benedictine-like humility. He has launched, built and led companies in the U.S., Europe and Asia and has a résumé that reads like a timeline for laser evolution, yet he tends to turn the focus to those who helped him succeed. “Through my career I’ve benefitted from just wonderful people,” he said. THE MONKS like Theisen, Fr. Alberic Culhane and Fr. Don Talafous, who taught him about the sciences and humanities and a world outside of himself. “I think that this place gives you a dose of what it means to sacrifice what you want to do in life to help others do what they want,” Hardwick said. THE HONEYWELL TEAM that took a chance on him right out of college, a job he said he landed thanks to “dumb luck.”

Imagination plays a critical role as Matt Reubendale and his teammates develop highly complex and valuable tech projects at San Diego-based Teradata. They often sift through the complexities and tap into their ingenuity by asking “What would have to be true?” Reubendale finds he is able to approach that question in a fundamentally different way than colleagues with more focused backgrounds. For that he thanks the varied disciplines and experiences of his Saint John’s liberal arts education. Reubendale came to Collegeville on an Abbey Scholarship, majored in political science, minored in psychology and poured himself into campus radio station KJNB. He learned how to get things done and how to be a leader as he and his fellow KJNBers figured out a way to stream the station on the Internet. Countless Johnnies and Bennies have helped him in his career since then, and he hopes to help others in theirs, he said. “The most important thing I learned at Saint John’s is you can’t do anything worth doing by yourself.”

THE FOUNDERS OF SPECTRA-PHYSICS, his second employer. He still gets a lump in his throat when he thinks about them. “I was the youngest and the dumbest, which is a great place to be when you’re 27