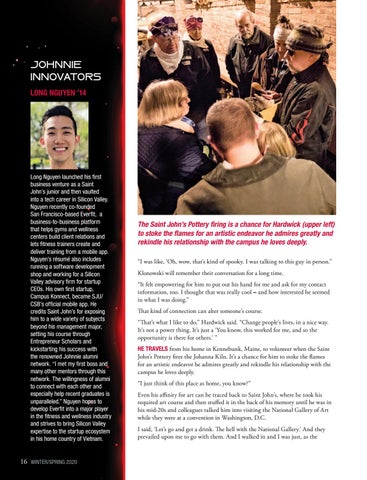 Long Nguyen launched his first business venture as a Saint John’s junior and then vaulted into a tech career in Silicon Valley. Nguyen recently co-founded San Francisco-based Everfit, a business-to-business platform that helps gyms and wellness centers build client relations and lets fitness trainers create and deliver training from a mobile app. Nguyen’s résumé also includes running a software development shop and working for a Silicon Valley advisory firm for startup CEOs. His own first startup, Campus Konnect, became SJU/ CSB’s official mobile app. He credits Saint John’s for exposing him to a wide variety of subjects beyond his management major, setting his course through Entrepreneur Scholars and kickstarting his success with the renowned Johnnie alumni network. “I met my first boss and many other mentors through this network. The willingness of alumni to connect with each other and especially help recent graduates is unparalleled.” Nguyen hopes to develop Everfit into a major player in the fitness and wellness industry and strives to bring Silicon Valley expertise to the startup ecosystem in his home country of Vietnam.