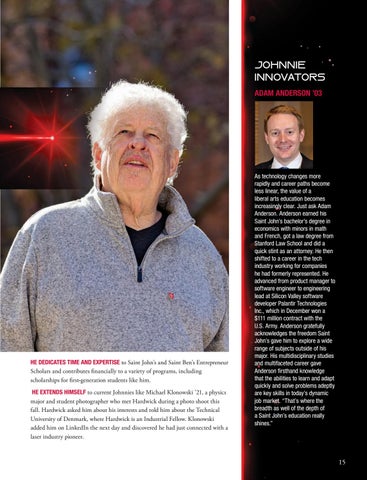 HE DEDICATES TIME AND EXPERTISE to Saint John’s and Saint Ben’s Entrepreneur Scholars and contributes financially to a variety of programs, including scholarships for first-generation students like him. HE EXTENDS HIMSELF to current Johnnies like Michael Klonowski ’21, a physics major and student photographer who met Hardwick during a photo shoot this fall. Hardwick asked him about his interests and told him about the Technical University of Denmark, where Hardwick is an Industrial Fellow. Klonowski added him on LinkedIn the next day and discovered he had just connected with a laser industry pioneer.

As technology changes more rapidly and career paths become less linear, the value of a liberal arts education becomes increasingly clear. Just ask Adam Anderson. Anderson earned his Saint John’s bachelor’s degree in economics with minors in math and French, got a law degree from Stanford Law School and did a quick stint as an attorney. He then shifted to a career in the tech industry working for companies he had formerly represented. He advanced from product manager to software engineer to engineering lead at Silicon Valley software developer Palantir Technologies Inc., which in December won a $111 million contract with the U.S. Army. Anderson gratefully acknowledges the freedom Saint John’s gave him to explore a wide range of subjects outside of his major. His multidisciplinary studies and multifaceted career gave Anderson firsthand knowledge that the abilities to learn and adapt quickly and solve problems adeptly are key skills in today’s dynamic job market. “That’s where the breadth as well of the depth of a Saint John’s education really shines.”