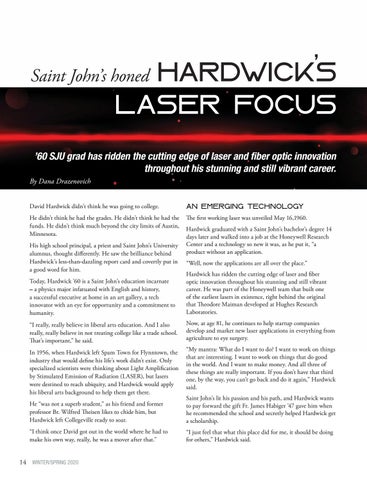 ’60 SJU grad has ridden the cutting edge of laser and fiber optic innovation throughout his stunning and still vibrant career. By Dana Drazenovich David Hardwick didn’t think he was going to college.

His high school principal, a priest and Saint John’s University alumnus, thought differently. He saw the brilliance behind Hardwick’s less-than-dazzling report card and covertly put in a good word for him.

Hardwick graduated with a Saint John’s bachelor’s degree 14 days later and walked into a job at the Honeywell Research Center and a technology so new it was, as he put it, “a product without an application. “Well, now the applications are all over the place.”

Today, Hardwick ’60 is a Saint John’s education incarnate – a physics major infatuated with English and history, a successful executive at home in an art gallery, a tech innovator with an eye for opportunity and a commitment to humanity.

Hardwick has ridden the cutting edge of laser and fiber optic innovation throughout his stunning and still vibrant career. He was part of the Honeywell team that built one of the earliest lasers in existence, right behind the original that Theodore Maiman developed at Hughes Research Laboratories.

Now, at age 81, he continues to help startup companies develop and market new laser applications in everything from agriculture to eye surgery.

In 1956, when Hardwick left Spam Town for Flynntown, the industry that would define his life’s work didn’t exist. Only specialized scientists were thinking about Light Amplification by Stimulated Emission of Radiation (LASER), but lasers were destined to reach ubiquity, and Hardwick would apply his liberal arts background to help them get there.

He “was not a superb student,” as his friend and former professor Br. Wilfred Theisen likes to chide him, but Hardwick left Collegeville ready to soar.

Saint John’s lit his passion and his path, and Hardwick wants to pay forward the gift Fr. James Habiger ’47 gave him when he recommended the school and secretly helped Hardwick get a scholarship.

“I think once David got out in the world where he had to make his own way, really, he was a mover after that.”

“I just feel that what this place did for me, it should be doing for others,” Hardwick said.