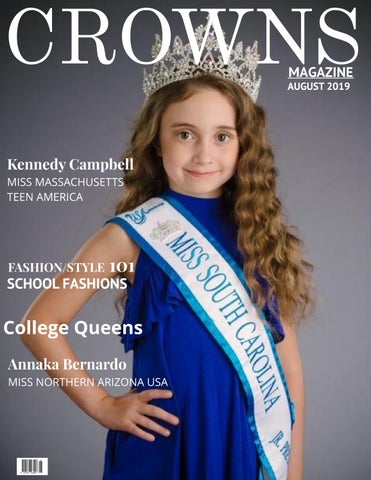 Miss USA Ambassador Teen Gabriela PeĂąa is a current sophomore at Liberty University in Lynchburg, VA, pursuing a degree in Fashion Design, with a goal of one day starting a clothing line. Nineteen-year-old Gabriela is the youngest of four children and grew up in a blended family with both Greek and Dominican traditions. Her love for pageants started when she was 16 and that spark has never dwindled. She competed in the U.S.A Ambassador Nationals pageant in July 2019 where she took home the crown as the new Miss U.S.A. Ambassador Teen 2019. One of Gabriela?s passions is volunteering. She is the founder of a 501(c)(3) organization called Joyful Sleepers, whose mission is to collect and distribute sleeping bags to the homeless. To date, Joyful Sleepers has collected over 600 sleeping bags with the goal of one day reaching 2,500. Apart from her non-profit organization, Gabriela also enjoys volunteering as a Community Group Leader on her college campus; serving at the local food bank and soup kitchen; participating in the ?Serve Lynchburg? program- working with children who live in local government housing; and volunteering in her church?s kids?ministry. She is a strong believer in getting involved in her community and making a difference in people?s lives. In her year as Miss U.S.A. Ambassador Teen 2019, Gabriela hopes to inspire others to do the same!

Mrs. Maryland America Kayla Schadegg is originally a Midwesterner, born and raised in Kansas. She moved to Maryland and married the love of her life, Kelly, in 2014. They welcomed their daughter, Kerrigan, in 2016. They enjoy running, hiking, and baking together. Kayla is an alumnus of Emporia State University in Emporia, KS, where she received a B.S. in Education with a minor in Creative Writing. She is a published author and poet. She has worked for My Gym Children?s Fitness Centers for over five years and is currently the director at the Annapolis franchise, combining her passions for education and fitness. Kayla also manages a variety of social media accounts as the marketing coordinator for several local My Gym franchises. In addition, she is also the social media chair for the Baltimore Buddy Walk; member of the Chesapeake Down Syndrome Parents?Group First Call and medical outreach teams; and serves as a Families as Faculty host for the Parents? Place of Maryland. As the proud mother to a gorgeous little girl with Down Syndrome, Kayla knows firsthand the impact of a diagnosis experience on a young family, whether pre- or post-natal. Through Strong Over Wrong, it is her mission to create a more informative and compassionate diagnosis experience for families everywhere. Photo by Mid-Atlantic Video Production &amp; Photography

Kennedy Campbell is the current Miss Massachusetts Teen America 2019. She is a high school senior and a pre-professional musical theatre and dance apprenticeship student at The Conservatory School for the Performing Arts in Massachusetts. She was awarded a full performance scholarship to the Berklee College 5-week summer program as a vocalist. Kennedy is currently working on her debut album and has released a song and video entitled ?Stand Up,? which can be found on iHeartRadio and iTunes. She is an actress and model who is signed with the Andrew Wilson Talent Agency in Boston, MA. Her manager is DWKing Talent Management. Kennedy can be found in television and internet commercials. She has also appeared in print ads for brands like Blue Cross Blue Shield, Hasbro, Optimum TV, and others. In January Kennedy made her regional theatre debut in the Wheelock Family Theatre production of Ragtime for their 2018-2019 season. She aspires to attend college to major in musical theatre and forensic science. You can find more information about Kennedy at www.songlosophy.com

Peyton Jade Money is an 8-year-old third grader at Spearman Elementary School in Piedmont, SC. She loves reading, dancing, tumbling, helping others, and hanging out with her family. One of the main reasons she started doing pageants is her love for helping others. During her first year in pageantry, she worked on community service projects to benefit other children. Her joy in working on these projects motivated her to start her own personal platform called Octopuses for Preemies, whose mission is to bring happiness to preemies one octopus at a time. Along with her mother and grandmother, she began making crochet octopuses for premature babies two years ago. Research shows these cute little critters benefit babies in the NICU in a number of ways. They have donated over 275 so far with plans to donate 200 more this year. Last year she was a part of the USA Ambassador pageant as Miss South Carolina Jr. Preteen USA Ambassador 2019. She also participated in the USA Ambassador national pageant in Tampa, FL, where she placed first runner up and won several other awards such as Best in Class (for academic success) and Glamour Photo thanks to Jeanna Beasley Photography. She was also most proud to receive the Community Service Award which proves that regardless of age you can still serve your community. Even at her young age, she knows how important it is to have a servant?s heart and to show others that kindness truly does count. During her reign this year, Peyton will continue to participate in other projects throughout South Carolina. She will be representing South Carolina as Miss Palmetto Jr. Preteen USA Ambassador 2020.

Annaka Bernardo Miss Northern Arizona USA will be receiving her Associate of Art from Yavapai College. She plans to continue her studies at Northern Arizona University where she will achieve her bachelor &#39;s degree in communication and broadcast journalism. Upon graduation, Bernado wants to become a sports broadcaster and personal trainer. Because she is passionate about physical fitness, she studied physical training at Yavapai College. Bernado plans on continuing helping others achieve their fitness goals and spreading awareness on the importance of physical fitness and health. Pageantry has given her a platform to help others that she may not have otherwise reached. Pageantry has also helped her become a public speaker. Public speaking will assist Annaka with her future goals. In her pageantry endeavors. Below is a shoe named after her by Marc Defang.

Miss Captivating Kendall Johnson is a native of Detroit, MI and recently relocated to Boston, MA, where she is a second year Social Work PhD student at Boston University. She is the 25-year-old daughter of Michael and Tracy Johnson, and is one of three girls. Her research interests focus on the effects of trauma and community violence on those who identify as black, specifically focusing on the impact of homicide for the surviving family members and friends that are left behind after a death has occurred. She also has recently started a blog called Kendall The Model Scholar, in which she discusses her experience as a black, female scholar intertwined with her modeling and pageantry. Through this blog, she hopes to inspire other black women and girls to pursue their dreams and reach their fullest potential. She is no stranger to the pageant world, having been competing since 2015. She has competed in Miss Michigan USA, Miss Lake State USA, Miss Nationwide, Captivating Pageants and Universal World Pageants. She just wrapped up her reign as Miss Universal World 2017, and is now transitioning into her new title of Miss Massachusetts Captivating, where she will compete for the national Miss Captivating title at the Captivating Pageants in Columbus, OH in September of 2019. Her platform is called Project M.A.G.I.C. (Motivating Amazing Girls in Underserved Communities) which is about building self-esteem in young women, and she will be working with an organization called Boston Cares in the upcoming year and focusing on volunteer opportunities that provide resources, mentoring and support for young women in the Boston area. She is committed to amplifying young women&#39;s voices , especially in higher education, because she believes that is crucial to the success and health of this country. Black women make up less than 4% of all people who have earned a PhD. As a Social Work PhD student at Boston University, she is the only black woman in her school. She looks around and sees no other students who look like her and it can be alienating. Without the support of her family, peers and her academic advisor, she would not be able to persist. This is why she champions the development of healthy mentoring relationships for young women. She wants to show the young women from her community that they can get to where she is, and she will support them in that pursuit. She started a mentoring program in her hometown of Detroit, MI called Young Women Walking in Purpose, in the hopes of providing quality mentoring opportunities for young women that focus on academic achievement, professional development and positive self-esteem. Additionally, she does volunteer work with Best Buddies Massachusetts Chapter, which is committed to advocating for inclusion of those with developmental disabilities. In her spare time she is a frequent attender of movies, and she enjoys spending time with her six-month-old black lab mix puppy, Nala.

Miss South Carolina USA Ambassador Rylee Mathis is a 21-year-old senior at North Greenville University in Tigerville, SC. She has been a cheerleader since the age of twelve and has continued her love for the sport in college by cheering on the NGU Crusaders for the last 4 years. She is a Health Science major and plans to enter the Accelerated Nursing Program to earn her RN, BSN and eventually work towards becoming a Nurse Practitioner. Rylee began participating in pageantry with her high school pageant in the ninth grade. She fell in love with every aspect of pageants and began competing full time. Her favorite aspect of pageantry is the community service that is so highly encouraged. Community service is her heart, earning the Gold Presidential Volunteer Service Award; Top 3 Community Service finalist at the Little Miss/Teen Miss South Carolina competition; and capturing the national USA Ambassador SLICC Ambassador title, a community service driven title that promotes Success through Leadership, Integrity, Character and Confidence. With the SLICC Ambassador title, Rylee was given the opportunity to travel to Puerto Rico to aid in Hurricane Maria relief efforts. She has been blessed to represent other titles such as Miss South Carolina USA Ambassador Teen 2016, Miss South Carolina USA Ambassador 2017, National SLICC Ambassador 2017, and USA Elegant Ms. 2018. Rylee can?t wait to see where else this journey through pageantry takes her as she embarks on finishing college and beginning her future career. 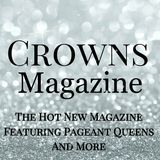