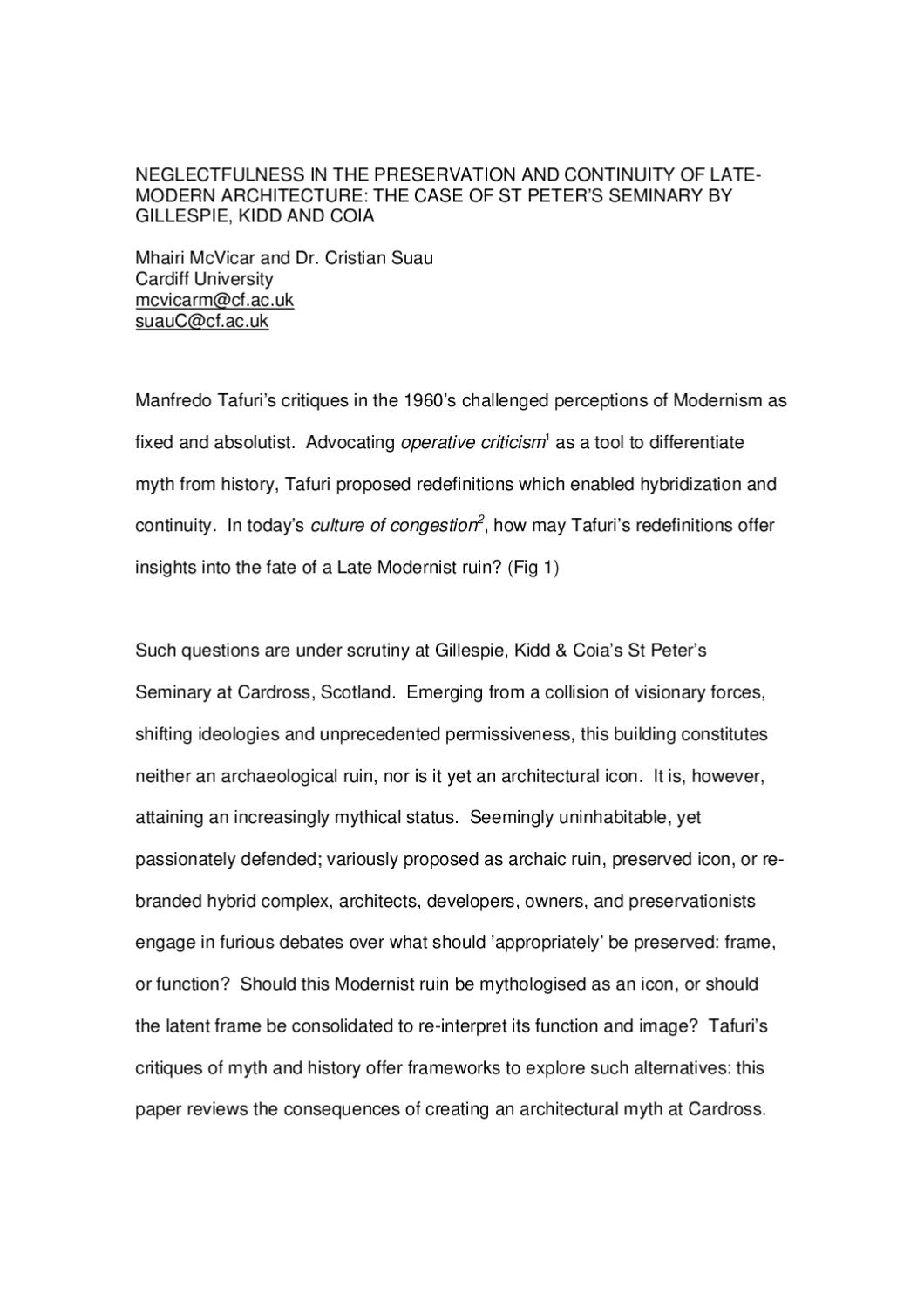 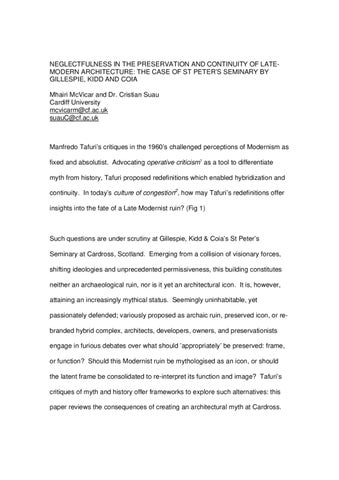 NEGLECTFULNESS IN THE PRESERVATION AND CONTINUITY OF LATEMODERN ARCHITECTURE: THE CASE OF ST PETER’S SEMINARY BY GILLESPIE, KIDD AND COIA Mhairi McVicar and Dr. Cristian Suau Cardiff University mcvicarm@cf.ac.uk suauC@cf.ac.uk

Manfredo Tafuri’s critiques in the 1960’s challenged perceptions of Modernism as fixed and absolutist. Advocating operative criticism1 as a tool to differentiate myth from history, Tafuri proposed redefinitions which enabled hybridization and continuity. In today’s culture of congestion2, how may Tafuri’s redefinitions offer insights into the fate of a Late Modernist ruin? (Fig 1)

Such questions are under scrutiny at Gillespie, Kidd &amp; Coia’s St Peter’s Seminary at Cardross, Scotland. Emerging from a collision of visionary forces, shifting ideologies and unprecedented permissiveness, this building constitutes neither an archaeological ruin, nor is it yet an architectural icon. It is, however, attaining an increasingly mythical status. Seemingly uninhabitable, yet passionately defended; variously proposed as archaic ruin, preserved icon, or rebranded hybrid complex, architects, developers, owners, and preservationists engage in furious debates over what should ’appropriately’ be preserved: frame, or function? Should this Modernist ruin be mythologised as an icon, or should the latent frame be consolidated to re-interpret its function and image? Tafuri’s critiques of myth and history offer frameworks to explore such alternatives: this paper reviews the consequences of creating an architectural myth at Cardross.

The mythology of Cardross begins with its spectacularly short life as a seminary. Commissioned in 1953 during a post-war building boom, the seminary responded to optimistic projections of growth for Roman Catholic congregations in redeveloping city centres and New Towns. An expansive church building program suggested the need for a facility to train 102 priests at St Peters College in the grounds of Kilmahew House at Cardross, 33 kilometers from the center of Glasgow. To undertake this ambitious proposal, the Archdiocese continued a long-established relationship with Glasgow based architects Gillespie, Kidd and Coia, who had completed numerous acclaimed Modernist churches over the previous twenty years. Their experience, combined with a robust economy and the autonomy of the architectâ&amp;#x20AC;&amp;#x2122;s role3 in mid 1950â&amp;#x20AC;&amp;#x2122;s Britain, encouraged â&amp;#x20AC;&amp;#x201C; demanded- a visionary response from the lead designers, Isi Metzstein and Andy Macmillan4. Completed in 1966, Cardross was immediately and overwhelmingly declared an architectural success, winning a RIBA Bronze Regional Award in 1967. Functional success was less conclusive; the complex was never fully occupied, and, after only fourteen years operating as a seminary, was abandoned and de-consecrated.5 Since 1980, the Archdiocese has adopted a condition of laissez-faire, relinquishing the building as a heavily weatherdamaged and vandalized ruin in an overgrown forest (Fig 2).

Two decades of continued dereliction have only intensified the allure. Active coalitions of architects and artists have vigorously lobbied for recognition of the

project, achieving an ‘A’ category historical listing, inclusion in the World Monument Fund’s 2007 review of endangered buildings, and top ranking in a 2008 Prospect Magazine list of the best 100 modern buildings in Scotland. A significant amount of literature has reviewed various alternatives for the fate of Cardross: acceptance as heroic ruin, reconstruction as iconic museum, reconfiguration as housing. 6 The Archdiocese proposed stripping the structure and selling portions of the site for a housing development; the Association for Cultural Advancement through Visual Art envisage redefining Cardross as a Scottish cultural arts powerhouse7; most recently, UK developers Urban Splash began feasibility studies for a housing redevelopment promising to preserve the ‘bulk, density and presence’8 of the building.

Such alternatives parallel contemporary debates defining the ‘appropriate’ re-use of mono-functional Late Modernist buildings. Since the collapse of Modernism, flexibility and changeability have become keywords for an unpredictable and uncertain situation. Within today’s culture of congestion, which encourages scenarios of overlapped and changing activities within a generic frame, the oppositional projections at Cardross align closely with Tafuri’s definitions of myth and history, manifested as ‘Total Theatre’9 or ‘absent minded usage.’10 In lieu of defining the ‘appropriate’ re-use of Cardross, what can Tafuri’s alternates instead offer to an understanding of the situation at Cardross?

History, in Tafuri’s critique, can no longer offer solutions; its role is to offer new questions, to generate new meanings, and to threaten and contest the ‘tranquilizing myths’11 of the present. In Theories and History of Architecture, the critic is urged to ‘give up simplifying history, and to accept its internal contradictions and its plurality.’12 The debated fate of Cardross can be represented as two alternatives: simplification as mythological icon, or redefinition as a historically ambiguous hybrid.

The complexities of history and myth at Cardross can be better understood by reviewing two key forces which were instrumental in the extremities of architectural success and functional failure:

The acceptance of l950’s Modernist redefinitions in the UK following the 9th CIAM Congress and the permissive declarations of Team X.

The radical ideologies of the Liturgical Movement leading up to the Second Vatican Council, and their spatial impact on seminary training.

The collision of these forces placed Cardross as a simultaneously visionary yet archaic response: a collision which began with the formal acceptance of Late Modernism in 1950’s Scotland.

Cardross was commissioned in 1953, three years before the 9th CIAM Congress which advocated historical engagement as a reaction against the unyielding ideologies of the 1928 La Sarraz declaration13. The completion of Le Corbusier’s Ronchamp and La Tourette in the late 1950’s embodied proposals to mediate tradition with Modernist ideologies; a stance which overruled previously antimodernist reactions from Arts and Crafts and Beaux Arts proponents in Britain. The predominantly British Team X and their specific re-interpretations of Late Modernism fuelled what Reyner Banham referred to as ‘an extraordinarily exciting time in the evolution of ideas in Britain.’14 Combined with a burgeoning economy and the promotion of the autonomous architect, the atmosphere offered an unprecedented permissiveness for young British architects. At Cardross, this translated into an uninhibited hybrid freely recalling components of La Tourette, Scottish baronial houses and mediaeval monasteries. Yet while Cardross responded architecturally to the leading edge of New Modernism, the functional brief was derived from a rapidly diminishing archaic Liturgy.

In 1962-65, while Cardross was in construction, the Second Vatican Council met, debated and published sixteen documents that radically and immediately altered the nature of the Liturgy. Formalizing the recommendations of the Liturgical Movement, these documents advocated a return to pre-mediaeval ideologies: specifically, a participatory Mass and increased engagement between priests and congregations. Both factors signalled radical revisions to church and seminary layouts: centralized forms replacing axial precedents, and urban engagement in

lieu of monastic isolation.15 In 1953, the year Cardross was commissioned, these radical visions were not manifest in Scotland, and the brief remained faithful to the remnants of the Old Liturgical ideology; a mediaeval, monastic community, inward looking, isolated from the world in a forest site 33 kilometres from the city centre, housing priests in rigid, structurally-integrated isolated cells.

Cardross stood at the brink of colliding ideologies as a hybrid spatial system, responding to the permissiveness of late Modernist principles and New Liturgical altar arrangements, but functionally attuned to the mono-functional and absolutist premises of early Modernism and the old Liturgy. Unable to respond to New Liturgical requirements of engagement, the seminary was functionally obsolete before construction was even complete.

Reasons for the continued dereliction are varied and ambiguous; the Archdiocese and potential developers struggle with economics, maintenance costs, the isolated site and the inflexibility of the structurally integrated cells. Yet it is precisely the isolated site, the ambitious scale and the uncompromising inflexibility on which the mythology of Cardross depends. In attempting to define Cardross as an architectural icon, one alternative for the building’s fate promotes preservation of the inflexible frame, a redefinition of Cardross as Tafuri’s ‘Total Theatre’.

This first viewpoint argues that Cardross should be preserved either as it is now, an archaeological ruin fixed at a specific moment in time, or returned to it’s ‘original’ condition. This stance disregards functional failure, retaining uninhabitable space as a Museum which displays the myth of irreplaceable authenticity (Fig 3). The value of authenticity is reliant upon a narrow, specific cultural status which is functionally closed and available only to the ‘expert’ insider - the architect, artist, initiated observer: the operative organizers party to the knowledge and secrets of the myth. The declaration of ‘masterpiece’ is ultimately reliant on a refusal to engage in use. ‘This is’, states Tafuri, ‘architecture that does not want to be consumed, that wants to prevent an absent-minded usage, and that, consequently, does not accept its disappearance as object; on the contrary, it means to reconstitute the ‘aura’ around itself.’ 16

Mythologizing is necessary to reconstitute the ‘aura’ of Cardross. A simplification of history is required to provide a coherent and convincing narrative which persuades like-minded supporters of the value of the project. Originality and authenticity are elevated and worshipped; functional and economic failures disregarded. Cardross preserved thus cannot be redefined for functional use; it remains preserved, pickled, as Tafuri’s ‘Total Theatre’; a stage set to celebrate the best of Scottish Modernism at a brief and unrepeatable moment in time.

The alternative stance defined by Tafuri is that of ‘absent minded usage’: architecture which accepts consumption and use by rejecting myth in favour of

history. Accepting the complexities and ambiguities of history permits redefinition and ‘free appropriation on the part of the public.’17 This alternative refutes the ‘myth’ of authenticity and iconicity; the project becomes ‘typological’ rather than ‘theatrical’, and the frame is redefined to function as a hotel, a spa, residences. (Fig 4).

This alternative consolidates the latent frame, revising structure, reconfiguring interior layouts, altering exterior appearance. Here, Tafuri observes, ‘the objects must completely lose their symbolic charge in order to be perceived in their pure relational values.’18 The core question of the fate of Cardross is revisited; what is the value which will retain core Modernist values and permit continuity? ‘What systems of value’, Tafuri asks, ‘are generally coherent and guarantee the possibility of adaptation and therefore of survival?’19

Two systems of values are on offer at Cardross. One system, favouring myth, promotes the value of authenticity to locate the frame as the functionally obsolete but irreplaceable art object as defined by the expert insider. Cardross is preserved as a museum, as Total Theatre. This fate depends upon the narrative of the created myth, on the economic and political strength of the community of expert insiders who organise the myth.

The alternative system, favouring history, defines the frame not as the fixed object but as the latent values of the Late Modernist project. Values of continuity

and flexibility are promoted through adaptation to permit survival. Cardross is adapted as housing or a hotel, open to the ‘everyday outsider’ for ‘absent minded usage’. This fate rests on the pragmatics and realities of economic forces; on the confluence of market needs, consumer desires, and programmatic flexibility. For Cardross to be resurrected functionally, it must first be freed from the ‘weight of myth.’ 20

‘It is myth that takes the place of history.’21 With this declaration, Tafuri defined the task of the critic as that of revealing the ‘ambiguities, values and mystification’ of history in order to offer the architect ‘conscious choice.’22

Mythologizing Cardross preserves only a fixed frame which prevents functional use; it promotes the romance of the archaeological ruin and the simplified sanctity of the architectural icon. Yet Cardross is neither a romantic ruin nor yet an architectural icon. It was an opportunistic project borne out of risk-taking on the brink of changing Late Modernist values, shifting Liturgical ideologies, and the ambitious forecasting of economic and demographic growth: extraordinary forces colliding to engender a permissive atmosphere of uninhibited and confident experimentation. Cardross presents the mythology of heroic late Modernist complexes that have succumbed because of their own spatial rigidity.

Core modernist values are, in Tafuri’s critique, located in the act of framing; the frame organizes, but also facilitates changeability of uses. Operative criticism 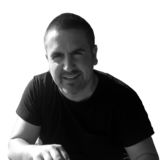