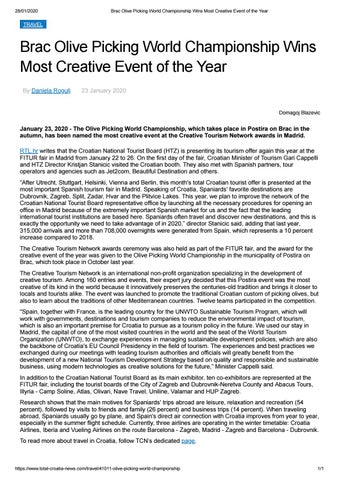 January 23, 2020 - The Olive Picking World Championship, which takes place in Postira on Brac in the autumn, has been named the most creative event at the Creative Tourism Network awards in Madrid. RTL.hr writes that the Croatian National Tourist Board (HTZ) is presenting its tourism offer again this year at the FITUR fair in Madrid from January 22 to 26. On the first day of the fair, Croatian Minister of Tourism Gari Cappelli and HTZ Director Kristjan Stanicic visited the Croatian booth. They also met with Spanish partners, tour operators and agencies such as Jet2com, Beautiful Destination and others. “After Utrecht, Stuttgart, Helsinki, Vienna and Berlin, this month&#39;s total Croatian tourist offer is presented at the most important Spanish tourism fair in Madrid. Speaking of Croatia, Spaniards&#39; favorite destinations are Dubrovnik, Zagreb, Split, Zadar, Hvar and the Plitvice Lakes. This year, we plan to improve the network of the Croatian National Tourist Board representative office by launching all the necessary procedures for opening an office in Madrid because of the extremely important Spanish market for us and the fact that the leading international tourist institutions are based here. Spaniards often travel and discover new destinations, and this is exactly the opportunity we need to take advantage of in 2020,” director Stanicic said, adding that last year, 315,000 arrivals and more than 708,000 overnights were generated from Spain, which represents a 10 percent increase compared to 2018. The Creative Tourism Network awards ceremony was also held as part of the FITUR fair, and the award for the creative event of the year was given to the Olive Picking World Championship in the municipality of Postira on Brac, which took place in October last year. The Creative Tourism Network is an international non-profit organization specializing in the development of creative tourism. Among 160 entries and events, their expert jury decided that this Postira event was the most creative of its kind in the world because it innovatively preserves the centuries-old tradition and brings it closer to locals and tourists alike. The event was launched to promote the traditional Croatian custom of picking olives, but also to learn about the traditions of other Mediterranean countries. Twelve teams participated in the competition. &quot;Spain, together with France, is the leading country for the UNWTO Sustainable Tourism Program, which will work with governments, destinations and tourism companies to reduce the environmental impact of tourism, which is also an important premise for Croatia to pursue as a tourism policy in the future. We used our stay in Madrid, the capital of one of the most visited countries in the world and the seat of the World Tourism Organization (UNWTO), to exchange experiences in managing sustainable development policies, which are also the backbone of Croatia&#39;s EU Council Presidency in the field of tourism. The experiences and best practices we exchanged during our meetings with leading tourism authorities and officials will greatly benefit from the development of a new National Tourism Development Strategy based on quality and responsible and sustainable business, using modern technologies as creative solutions for the future,” Minister Cappelli said. In addition to the Croatian National Tourist Board as its main exhibitor, ten co-exhibitors are represented at the FITUR fair, including the tourist boards of the City of Zagreb and Dubrovnik-Neretva County and Abacus Tours, Illyria - Camp Soline, Atlas, Olivari, Nave Travel, Uniline, Valamar and HUP Zagreb. Research shows that the main motives for Spaniards&#39; trips abroad are leisure, relaxation and recreation (54 percent), followed by visits to friends and family (26 percent) and business trips (14 percent). When traveling abroad, Spaniards usually go by plane, and Spain&#39;s direct air connection with Croatia improves from year to year, especially in the summer flight schedule. Currently, three airlines are operating in the winter timetable: Croatia Airlines, Iberia and Vueling Airlines on the route Barcelona - Zagreb, Madrid - Zagreb and Barcelona - Dubrovnik. To read more about travel in Croatia, follow TCN’s dedicated page. 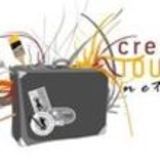