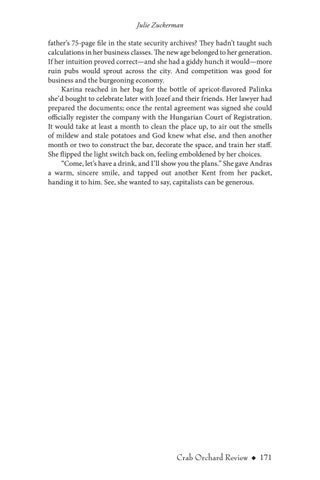 Julie Zuckerman father’s 75-page file in the state security archives? They hadn’t taught such calculations in her business classes. The new age belonged to her generation. If her intuition proved correct—and she had a giddy hunch it would—more ruin pubs would sprout across the city. And competition was good for business and the burgeoning economy. Karina reached in her bag for the bottle of apricot-flavored Palinka she’d bought to celebrate later with Jozef and their friends. Her lawyer had prepared the documents; once the rental agreement was signed she could officially register the company with the Hungarian Court of Registration. It would take at least a month to clean the place up, to air out the smells of mildew and stale potatoes and God knew what else, and then another month or two to construct the bar, decorate the space, and train her staff. She flipped the light switch back on, feeling emboldened by her choices. “Come, let’s have a drink, and I’ll show you the plans.” She gave Andras a warm, sincere smile, and tapped out another Kent from her packet, handing it to him. See, she wanted to say, capitalists can be generous.