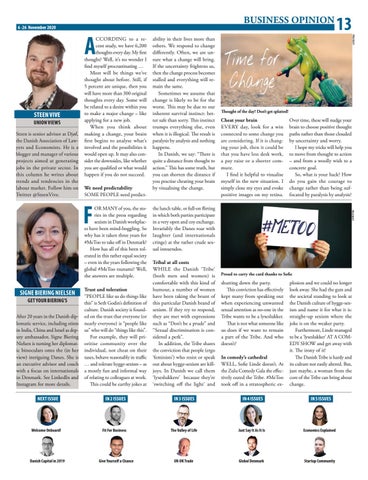 UNION VIEWS Steen is senior advisor at Djøf, the Danish Association of Lawyers and Economists. He is a blogger and manager of various projects aimed at generating jobs in the private sector. In this column he writes about trends and tendencies in the labour market. Follow him on Twitter @SteenVive.

CCORDING to a recent study, we have 6,200 thoughts every day. My first thought? Well, it’s no wonder I find myself procrastinating … Most will be things we’ve thought about before. Still, if 5 percent are unique, then you will have more than 300 original thoughts every day. Some will be related to a desire within you to make a major change – like applying for a new job. When you think about making a change, your brain first begins to analyse what’s involved and the possibilities it would open up. It may also consider the downsides, like whether you are qualified or what would happen if you do not succeed. We need predictability SOME PEOPLE need predict-

After 20 years in the Danish diplomatic service, including stints in India, China and Israel as deputy ambassador, Signe Biering Nielsen is turning her diplomatic binoculars onto the (in her view) intriguing Danes. She is an executive advisor and coach with a focus on internationals in Denmark. See LinkedIn and Instagram for more details.

Trust and toleration “PEOPLE like us do things like this” is Seth Godin’s definition of culture. Danish society is founded on the trust that everyone (or nearly everyone) is “people like us” who will do “things like this”. For example, they will prioritise community over the individual, not cheat on their taxes, behave reasonably in traffic … and tolerate hygge-sexism – as a mostly fun and informal way of relating to colleagues at work. This could be earthy jokes at

Give Yourself a Chance

Cheat your brain EVERY day, look for a win connected to some change you are considering. If it is changing your job, then it could be that you have less desk work, a pay raise or a shorter commute. I find it helpful to visualise myself in the new situation. I simply close my eyes and evoke positive images on my retina.

Over time, these will nudge your brain to choose positive thought paths rather than those clouded by uncertainty and worry. I hope my tricks will help you to move from thought to action – and from a woolly wish to a concrete goal. So, what is your hack? How do you gain the courage to change rather than being suffocated by paralysis by analysis?

the lunch table, or full-on flirting in which both parties participate in a very open and coy exchange. Invariably the Danes roar with laughter (and internationals cringe) at the rather crude sexual innuendos. Tribal at all costs WHILE the Danish ‘Tribe’ (both men and women) is comfortable with this kind of humour, a number of women have been taking the brunt of this particular Danish brand of sexism. If they try to respond, they are met with expressions such as “Don’t be a prude” and “Sexual discrimination is considered a perk”. In addition, the Tribe shares the conviction that people (ergo ‘feminists’) who resist or speak out about hygge-sexism are killjoys. In Danish we call them ‘lyseslukkere’ because they’re ‘switching off the light’ and

Thought of the day? Don’t get splatted!

OR MANY of you, the stories in the press regarding sexism in Danish workplaces have been mind-boggling. So why has it taken three years for #MeToo to take off in Denmark? How has all of this been tolerated in this rather equal society – even in the years following the global #MeToo tsunami? Well, the answers are multiple.

ability in their lives more than others. We respond to change differently. Often, we are unsure what a change will bring. If the uncertainty frightens us, then the change process becomes stalled and everything will remain the same. Sometimes we assume that change is likely to be for the worse. This may be due to our inherent survival instinct: better safe than sorry. This instinct trumps everything else, even when it is illogical. The result is paralysis by analysis and nothing happens. In Danish, we say: “There is quite a distance from thought to action.” This has some truth, but you can shorten the distance if you practise cheating your brain by visualising the change.

Proud to carry the card thanks to Sofie

shutting down the party. This conviction has effectively kept many from speaking out when experiencing unwanted sexual attention as no-one in the Tribe wants to be a lyseslukker. That is not what someone like us does if we want to remain a part of the Tribe. And who doesn’t? In comedy’s cathedral WELL, Sofie Linde doesn’t. At the Zulu Comedy Gala she effectively outed the Tribe. #MeToo took off in a stratospheric ex-

plosion and we could no longer look away. She had the guts and the societal standing to look at the Danish culture of hygge-sexism and name it for what it is: straight-up sexism where the joke is on the weaker party. Furthermore, Linde managed to be a ‘lyseslukker’ AT A COMEDY SHOW and get away with it. The irony of it! The Danish Tribe is hardy and its culture not easily altered. But, just maybe, a woman from the core of the Tribe can bring about change.

The Valley of Life

Just Say It As It Is

The Copenhagen Post - Denmark's leading source for news in English. 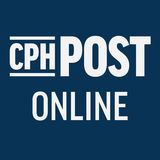