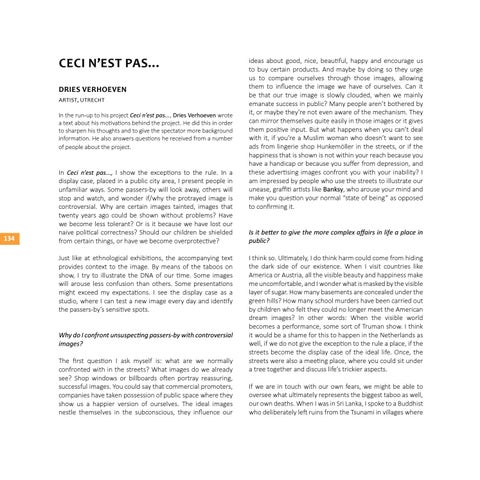 In the run-up to his project Ceci n’est pas..., Dries Verhoeven wrote a text about his motivations behind the project. He did this in order to sharpen his thoughts and to give the spectator more background information. He also answers questions he received from a number of people about the project.

In Ceci n’est pas..., I show the exceptions to the rule. In a display case, placed in a public city area, I present people in unfamiliar ways. Some passers-by will look away, others will stop and watch, and wonder if/why the protrayed image is controversial. Why are certain images tainted, images that twenty years ago could be shown without problems? Have we become less tolerant? Or is it because we have lost our naive political correctness? Should our children be shielded from certain things, or have we become overprotective? Just like at ethnological exhibitions, the accompanying text provides context to the image. By means of the taboos on show, I try to illustrate the DNA of our time. Some images will arouse less confusion than others. Some presentations might exceed my expectations. I see the display case as a studio, where I can test a new image every day and identify the passers-by’s sensitive spots. Why do I confront unsuspecting passers-by with controversial images? The first question I ask myself is: what are we normally confronted with in the streets? What images do we already see? Shop windows or billboards often portray reassuring, successful images. You could say that commercial promoters, companies have taken possession of public space where they show us a happier version of ourselves. The ideal images nestle themselves in the subconscious, they influence our

ideas about good, nice, beautiful, happy and encourage us to buy certain products. And maybe by doing so they urge us to compare ourselves through those images, allowing them to influence the image we have of ourselves. Can it be that our true image is slowly clouded, when we mainly emanate success in public? Many people aren’t bothered by it, or maybe they’re not even aware of the mechanism. They can mirror themselves quite easily in those images or it gives them positive input. But what happens when you can’t deal with it, if you’re a Muslim woman who doesn’t want to see ads from lingerie shop Hunkemöller in the streets, or if the happiness that is shown is not within your reach because you have a handicap or because you suffer from depression, and these advertising images confront you with your inability? I am impressed by people who use the streets to illustrate our unease, graffiti artists like Banksy, who arouse your mind and make you question your normal “state of being” as opposed to confirming it. Is it better to give the more complex affairs in life a place in public? I think so. Ultimately, I do think harm could come from hiding the dark side of our existence. When I visit countries like America or Austria, all the visible beauty and happiness make me uncomfortable, and I wonder what is masked by the visible layer of sugar. How many basements are concealed under the green hills? How many school murders have been carried out by children who felt they could no longer meet the American dream images? In other words: When the visible world becomes a performance, some sort of Truman show. I think it would be a shame for this to happen in the Netherlands as well, if we do not give the exception to the rule a place, if the streets become the display case of the ideal life. Once, the streets were also a meeting place, where you could sit under a tree together and discuss life’s trickier aspects. If we are in touch with our own fears, we might be able to oversee what ultimately represents the biggest taboo as well, our own deaths. When I was in Sri Lanka, I spoke to a Buddhist who deliberately left ruins from the Tsunami in villages where