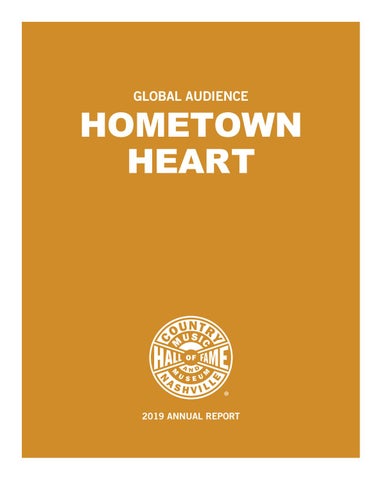 From the CEO Rodney Crowell has a song called “My Past Is Present.” Rodney was a Houston kid whose melodies and artistry earned him a global audience. He is a key figure in the life and career of Emmylou Harris, and he was featured last year in a Museum program and in our Emmylou Harris exhibition, Songbird’s Flight. Every day, I am reminded that the Country Music Hall of Fame and Museum is a place of ongoing interaction between past and present. That interaction is necessary for a fertile future. Our past is present, and it allows us to envision remarkable things to come. Understanding history presents greater possibility for that future vision. In this report, you will see impressive numbers and read about some of the things that earn the Museum a global audience while retaining a hometown heart. We cannot be a world-class institution without being a first-class neighbor in Nashville, where local melodies and artistry become worldwide sensations, and where Rodney Crowell and other wonders like him build songs from wood and wire and deep emotion. We take all of this seriously, and we know full well that we are temporary custodians of an enduring public trust. In 2019, we received an Arts Leadership award from the Tennessee Arts Commission, ratifying the Museum as a place that upholds what is worth upholding, and as a Tennessee treasure with worldwide impact. Our success presents more questions: What do we do, now that we’ve done in a sense what we set

The Mission The Country Music Hall of Fame and Museum collects, preserves, and interprets the evolving history and traditions of country music. Through exhibits, publications, and educational programs, the Museum teaches its diverse audiences about the enduring beauty and cultural importance of country music.

out to do? How do we honor the honorable? How do we present beautiful days in the neighborhood that reverberate across the globe? Well, Rodney Crowell also has a song called “The Answer Is Yes.” Thank you for your kindness, your guidance, and your inspiration. Sincerely,

Collections PROVIDE A HOME FOR HISTORY The Country Music Hall of Fame and Museum is dependent on kindness and understanding. We depend on the kindness of those who understand that this is a place that upholds, understands, and illuminates history. In 2019, kindness and understanding brought culturally significant wonders to the Museum. Brothers Del and Dane Bryant, along with their families, donated a vast collection that included sixteen bound ledgers of original, handwritten lyrics from Country Music Hall of Fame members Boudleaux and Felice Bryant, including classic songs “We Could,” “Rocky Top,” and “Bye Bye Love.” These ledgers offer an inspiring window into the Bryants’ songwriting process, affording visitors a glimpse into unprecedented creativity that helped shape the country music story. The ledgers are displayed in a Museum exhibition, and the Bryants’ songs were sung again at an exhibit opening that featured Jason Isbell and Alison Krauss; Ketch Secor and Critter Fuqua from Old Crow Medicine Show; and Bobby Osborne, who popularized “Rocky Top” with brother Sonny Osborne. In November 2019, the Museum celebrated the Willard and Pat Walker Charitable Foundation’s donation of Nashville’s community guitar, the Gibson SJ-200 owned by Cowboy Jack Clement and played by luminaries including Dan Auerbach, Johnny Cash, John Hartford, Waylon Jennings, and John Prine. At the donation ceremony, Shawn Camp, Crystal Gayle, Prine, and Charley Pride performed songs that Cowboy brought to the forefront. “Remember, we’re in the fun business,” Cowboy used to say. “If we’re not having fun, we’re not doing our jobs.” Photo: Ledgers of original, handwritten lyrics by Boudleaux and Felice Bryant, which are now part of the Museum’s permanent collection.

All for the Hall Los Angeles CELEBRATES MUSIC AND MISSION

Country Music Hall of Fame members Vince Gill and Emmylou Harris teamed up with Sheryl Crow and Luke Combs, swapping stories and songs as part of the Museum’s All for the Hall benefit concert. The all-star lineup reached across generations and genres to perform for a packed audience at The Novo theater in downtown Los Angeles. To open All for the Hall, students from Los Angeles Unified School District’s Elysian Heights Elementary school performed a song titled “Rule the World for a Day,” which they co-wrote through the Museum’s Words & Music program with hit songwriter Phil Barton, Grammy-winning songwriter Liz Rose, and rising country artist Tenille Townes. The charming performance underlined the primary goal of the evening: to fund and uplift the Museum’s educational work.

Photo: Vince Gill and Luke Combs high-five after a collaboration at All for the Hall Los Angeles.

The Country Music Hall of Fame and Museum has a deep commitment to providing diverse educational programs that promote lifelong learning, meet local and national instructional needs, and broadly share the beauty and cultural significance of country music with a global audience. Last year, educators and historians guided a record 1,450 programs that reached 107,000 people. Among those offerings is the Museum’s flagship educational program, Words & Music. Through Words & Music, students in grades 3–12 learn how to craft an original song lyric through a ten-unit curriculum. Their classrooms are then paired with professional songwriters who help transform selected student lyrics into finished songs. To better meet evolving demand for the program, Words & Music has been adapted to provide broader and deeper service to students. Additional experiences include: Songwriting 101, an introduction that teaches songwriting basics; Songwriting Camp, a multiday experience for budding songwriters to hone their craft and collaborate; Songwriting Tune-Up, a series of mentoring sessions to encourage the sharpening of songwriting skills; and Words & Music for Pre-K, a pilot in Nashville-area Head Starts, made possible by a two-year grant from PNC Grow Up Great, serving learners ages 3–5.

Photo: Middle Tennessee students learn about the roots of country music on a “Guided Highlights” tour of the Museum. This tour is often combined with a Words & Music workshop.

Music Hall of Fame in the Museum’s annual Medallion

The new Hall of Fame members were saluted with stories

led the house in a rousing rendition of “Will the Circle

Photo: On board a steamroller printer, Stephanie Carpenter with the Hamilton Wood Type and Printing Museum in Two Rivers, Wisconsin, participates in Hatch’s 140th anniversary celebration and the Wayzgoose for printmakers.

Digital Programs MOVE THE MISSION BEYOND OUR WALLS

In 2019, the Country Music Hall of Fame and Museum launched Voices in the Hall, a podcast filled with mission-relevant conversation and music. Museum director, producer, and writer Peter Cooper hosted conversations with Jimmie Allen, Dierks Bentley, Kane Brown, Sam Bush, Mary Chapin Carpenter, Rosanne Cash, Dave Cobb, Jessi Colter, Larry Gatlin, Emmylou Harris, Sierra Hull, Nick Lowe, Buddy and Julie Miller, Linda Ronstadt, Ricky Skaggs, Ray Stevens, The War and Treaty, and Charlie Worsham. Voices in the Hall episodes are recorded in the Museum’s audio lair by master engineer Alan Stoker, the son of Country Music Hall of Fame member Gordon Stoker (The Jordanaires). 2019 also brought the premiere of Unbroken Circle, a video series that explores the connections between country music’s past, present, and future by linking an artist featured in the American Currents exhibit with the larger story told in the Museum. The first season follows singer-songwriter Carly Pearce as she visits the Museum’s galleries, Frist Library and Archives, and Historic RCA Studio B. Over the course of several days, Pearce digs for inspiration, learns more about the artists who have influenced her, and makes memories at the Museum along with her friends and collaborators busbee, Michael Ray, Jeannie Seely, and Emily Shackelton. The series is available, including bonus content, on YouTube.

***Includes the Archival Permanent Endowment Fund, which is held by

The Community Foundation of Middle Tennessee for the Museum’s benefit.

THE MUSEUM’S ECONOMIC IMPACT IN 2019

The Country Music Hall of Fame and Museum contributes significantly to Nashville’s prosperity, generating an economic

impact of more than $81 million in 2019, according to the Arts & Economic Prosperity 5 Calculator. Additionally, 2,342

full-time equivalent jobs were supported by the Museum and its audiences, and $8.3 million in revenue was generated for local and state government.

In its ongoing commitment to sustainability, the Museum has formalized effective practices across all

departments. These sustainability-focused practices include: landfill diversion through composting, recycling,

and proper disposal of glass; all-staff education; accessible equipment and color-coded receptacles; all compostable food/drink containers and utensils; food donations; participation in regional and national sustainability programs; and purchase and use of environmentally friendly cleaning products. As a result, more than 145 tons of trash were diverted in 2019, while 21,800 meals were provided for Middle Tennesseans through food donations.

*The 2019 Income and Expense summary is not audited. The Museum’s audited financial statement and IRS form 990 will be publicly available on GivingMatters.com. **Contributed revenue excludes funds raised for auxiliary activities.

engaged in Museum programs for schools.

available online, with more than 1,173 photographs, recordings, and documents accessed daily at Digi.CountryMusicHallofFame.org.

hosted at the Museum.

featured the Museum and its programs, reaching 6.8 billion people.

provided for Middle Tennesseans through the donation of 11,161 pounds of food.

*According to Independent Sector research.

*A fund of The Community Foundation of Middle Tennessee.

Photo: Kacey Musgraves and her husband, Ruston Kelly, left, enjoy a special moment with family and friends at the opening of Kacey Musgraves: All of the Colors.

CINDY WALKER SOCIETY By including the Country Music Hall of Fame and Museum in their estate plans, the following donors help to preserve the history and traditions of country music for future generations.

100+ HOUR VOLUNTEERS We are grateful for the following volunteers who gifted 100 or more hours of their time and talents in support of the Museum’s 2019 programs.

Circle Guard The Country Music Hall of Fame and Museum Circle Guard unites and celebrates individuals who have given their time, talent, and treasure to safeguard the integrity of country music and make it accessible to a global audience through the Museum. The Circle Guard designation ranks as the grandest distinction afforded to those whose unwavering commitment to the Museum protects the legacies of the members of the Country Music Hall of Fame, and, by extension, the time-honored achievements of all who are part of the country music story. Steve Turner, Founder Kyle Young, Commander General David Conrad J. William Denny Mary Ann McCready Seab Tuck

Support Our funders, volunteers, and donors give generously to help the Museum fulfill its mission. Join us in our work to share the enduring beauty of this music with a growing audience.