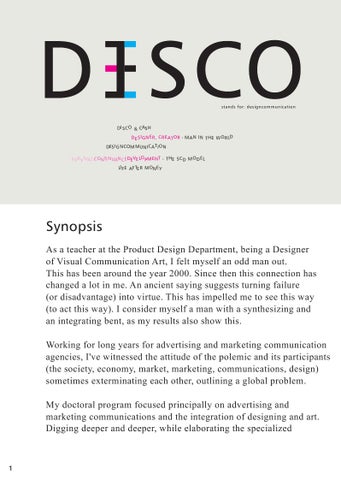 Synopsis As a teacher at the Product Design Department, being a Designer of Visual Communication Art, I felt myself an odd man out. This has been around the year 2000. Since then this connection has changed a lot in me. An ancient saying suggests turning failure (or disadvantage) into virtue. This has impelled me to see this way (to act this way). I consider myself a man with a synthesizing and an integrating bent, as my results also show this. Working for long years for advertising and marketing communication agencies, I've witnessed the attitude of the polemic and its participants (the society, economy, market, marketing, communications, design) sometimes exterminating each other, outlining a global problem. My doctoral program focused principally on advertising and marketing communications and the integration of designing and art. Digging deeper and deeper, while elaborating the specialized

literature of marketing comprehensively, I've come up against intellectual obstacles. I've found doctrines that are inappropriate for conceptualizing the modern world. The model is one-sided and works only under the protection of the insufficiency of information of the consumer society, which has currently become old-fashioned professionally, not to mention its moral background. Due to the global penetration of the Internet and the knowledgesharing factors, marketing has become unpretentious. Though its literature and its techniques try to keep up with development, it looks crystal clear however, that marketing, in its maturation basically, had not reckoned with knowledge itself and, most importantly, the coded norms of human being. Had not reckoned with our creator or designer skill that determine the trinity of Survival - Continuance Development (SCD) since its existence. This led me to deal with the identity of Design, parallel to marketing. With its reason for the existence. I analyzed both phenomena in various historical levels, then as a follow-up I also used my fantasy to try it out in an almost fictional environment that demolished all frontiers: I contemplated the issue from a higher and higher level, considering the axiom of infinity. The formation and existence of the universe (metaverse) and the marketing (?). The formation and existence of the universe (metaverse) and the design (?). The formation and existence of the universe (metaverse) and the creation (?).

As you can see, the answer is nearly banalâ&#x20AC;Ś Returning to human grades, I've got my research to the point of construing the aforementioned polarity on the axis of the constant and of the variable. My subjective mind came to the statement - of course by means of my researches - that the phenomenon of marketing has a manifestation which is not constant but neither variable.

Marketing is a impermanent phenomenon. The reign of marketing can be only applied to the present economical structure and may be related strictly to the existence of money and to its procurement by various means, with a background of content based exclusively on quantity and accumulation. Thus I had no other choice than to attempt to interpret the global arousal to consciousness of Design. I made the interpretation, the understanding, the comprehension, and the explanation unambiguous from a philosophical point of view, switched to the level of formation and existence theory, paralleling idea with information. Idea = Design (Planning/Creation), Information = Communication

I got to the point where by unifying design and communication I could find an alternate social SCD catalyst that considers the constant and the variable, which I named Design Communication. I also elaborated a definition, with a trademark recognized by MSZH (Hungarian Bureau of Standards) and sound like this: DESIGNCOMMUNICATION = COMMUNICATION INTEGRATED INTO DEVELOPMENT

Design Communication as a notion is in use at Moholy-Nagy University of Art and Design in several content relations. “Everybody” knows that it's linked to the Design Department and especially to me. Nowadays the profession wraps and unwraps this expression and uses it to its complete satisfaction. I've seen it lately for example on the list of subjects at the Sopron University, with a label of Technical Graphics… Well, Design Communication, in its original interpretation, has little to do with Technical Graphics, but its meaning is: DesignCommunication = communication integrated into development. This is a kind of approach that attempts to link Design and the economy which defines our recent life, with strategic communication,

providing it with its appropriate status. Last year I made a decision seeing the age of open source codes, mass co-operations and the democratization of knowledge – of trademarking this compound the way I wanted. With a particle of bad conscience. There may come a day when nobody goes to trademark anything, but every scientific, research, etc. results would be shared with anybody in the spirit of common knowledge… For that very reason I'd like to indicate that tthis trademark's been created not for abusing it or for having certain claims (and this applies to every member of Co&Co as well), but merely to call the attention to its original meaning, which may be used by anyone of course (public institution, enterprises or private entities), obviously in the name of the expectable fair play. In my recent workplaces - at the Co&Co and the Moholy-Nagy University of Arts and Design - I apply and teach the approach and strategy of DesignCommunication. Numerous national and international professional success justifies its efficiency, as a designer and as a professor as well.

Now some sentences as the brief description of my book: The book titled DISCO emphasizes primarily the opportunities and responsibilities of creative man. Defines and evaluates the theoretical substance of design and creation. Tells about knowledge-based society, or rather knowledge-based economy, about its updating, about the strategic position of Design, about DesignCommunication, about the creative contemplation and its integration into the society (or societies) of the “future”, as well as about its market potential demonstrated in a new, alternate economical model and (also) supplemented by subjective elements.

In addition to this it analyzes the communication possibilities of the human race. The perfect Babelâ&#x20AC;Ś Letters, words, thoughts, interpretations and evaluations, messageâ&#x20AC;Ś It showcases the diversity and at the same time insufficiency of the forms of human intimation. That book is a professional tale. It presents our civilization in an absurd situation, it tells about financial anomalisms, the anachronism of money, about the virtual legal tender that in a snap turns from inconceivable to joyful reality to some people, while to others it turns to a painful present that eats up everything. About marketing and 'marketinglessness', about the relationship between Design and the Conscious Consumer, about bluffs and real problems, mass co-operations, about induced professions, titled trendy though they're practically artificial, about the relation between Human - Earth - Universe and etc. - hopefully in a digestible, humorous, ironical, sometimes with an offensive, provocative, blasphemous overtone.

Reproduction, storing in data systems, to publish it by any

without permitted without restriction.

means or methods (electronically, photographically or other way)

permission of the publisher is

ECONOMICAL AND SOCIAL BASIC MODEL ACCORDING TO

to accept the Internet as a kind of infrastructure that may do the most for the sake of Survival-Continuance-Development, i.e. it creates equal opportunity and enables the democratization of knowledge and technology never ever experienced before.

to find the common denominator, the minimum and maximum rules (solutions) within the entire human race, and to accept the common currency temporarily.

to make every existing language official - including sign language -, and to improve the optimal translating technology as soon as possible, in the name of planetary solidarity. To create the SCD Wiki environment, by conceptualizing the common denominator and the minimum and maximum rules.

to make the software / project / environment that provides the SCD (namely Survival-Continuance-Development) widely known, and to operate it as a supplementary economical model as soon as possible, initially for children and the elderly who could do with value-sustaining and value-creating social presence (provisionally with “state” subsidy).

to support and to use mass collaboration, Wikipedia and Wikinomics as default approach on every level (provisionally with “state” subsidy).

to introduce the SCD program to educational institutes, from primary school to the highest levels & to make it accessible for the whole society the way e.g. Wikipedia does recently (provisionally with “state” subsidy).

to make the society open and accountable, without specific direction or orientation, namely to make the information accessible for all.

to redefine the procurability of money in the agglomeration of SCD, accountableness and openness. The SCD is fully aware of the value that all things, on a local and planetary scale have, thus the social participation of people will be steadily evaluated in credits, scores, smileys, whatever, that would even be allotted to material goods.

to be prepared for the direct democracy (and though it may seem to be a paradox, this could be realized provisionally via state communications, since - with a bit of good intent - the state in democracy equals community, even today)

this would be followed by the first year of direct democracy. The assumptions, local and global problems would be discussed, then resolved by means of the SCD, of various open source coded interfaces, and of community forums. The one year that it takes today for a law to be framed, would be no more than one month in direct democracy. Law is not constant, but constantly changing, complying with the moral development of the society and with the help of the SCD. Law is not a prohibition or rules - but resolution!

the workplaces that can be substituted by infrastructure will be terminated. Brand new, free, independent and new-type workplaces will be created. SCD helps monitoring the amount of contributors, balancing and evaluating the importance of a raised problem, of course by considering the local and planetary interests.

the recent model of money, of its institutions and of its social background would cease completely, it would exist no more as an independent entity. The descendant of money would be social value judgment (let's call it S.V.J. by now), that could be materialized anywhere or anytime, according to the future requirements.

territorial boundaries would terminate on Earth. This would open the door to all nations' culture and language to develop and to live peacefully within the Planetary Whole, without revisionist ideas that refer to wars and the past: The Planet will be your homeland, your garden, to be protected and attended properly.

beyond all this, everyone would be allowed to live the way they lived before, though free and open. They would love and desire another person, they would care for their children and listen to music, make excursions, ride the bike, eat, sleep, read Greek philosophers and contemporary writers in other languages as well, with any cultural affiliation, they would practice their religion the way they did before, of course with cultural, philosophical and mental approach (instead of the authoritative and materialized ideology of nowadays), and all this with honor, equal opportunities and secure living, since their freely chosen job stays for ever with the help of the SCD environment, whereas their vocation, workplace and life are nothing else than Planet Earth.

I had to go all the time / I took you with me / you wanted it or not / on the wings of promises / to the war against tomorrow / white rock / resounds no more / the warmth you were about to get / is soaked by sand and wind / here within / but while I travel: I AM / I had to go always / and this would never ever change / fear is gone / depart I must even if / I never arrive / I will be light and shadow (Postulate) 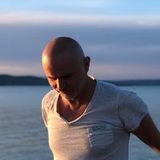 DISCO emphasizes primarily the opportunities and responsibilities of creative man. Defines and evaluates the theoretical substance of design...

DISCO emphasizes primarily the opportunities and responsibilities of creative man. Defines and evaluates the theoretical substance of design...