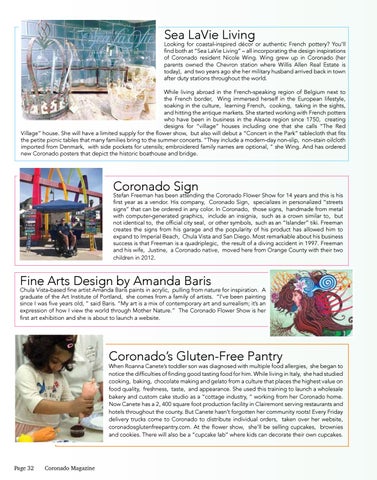 Looking for coastal-inspired décor or authentic French pottery? You’ll find both at “Sea LaVie Living” – all incorporating the design inspirations of Coronado resident Nicole Wing. Wing grew up in Coronado (her parents owned the Chevron station where Willis Allen Real Estate is today), and two years ago she her military husband arrived back in town after duty stations throughout the world. While living abroad in the French-speaking region of Belgium next to the French border, Wing immersed herself in the European lifestyle, soaking in the culture, learning French, cooking, taking in the sights, and hitting the antique markets. She started working with French potters who have been in business in the Alsace region since 1750, creating designs for “village” houses including one that she calls “The Red Village” house. She will have a limited supply for the flower show, but also will debut a “Concert in the Park” tablecloth that fits the petite picnic tables that many families bring to the summer concerts. “They include a modern-day non-slip, non-stain oilcloth imported from Denmark, with side pockets for utensils; embroidered family names are optional, ” she Wing. And has ordered new Coronado posters that depict the historic boathouse and bridge.

Stefan Freeman has been attending the Coronado Flower Show for 14 years and this is his first year as a vendor. His company, Coronado Sign, specializes in personalized “streets signs” that can be ordered in any color. In Coronado, those signs, handmade from metal with computer-generated graphics, include an insignia, such as a crown similar to, but not identical to, the official city seal, or other symbols, such as an “Islander” tiki. Freeman creates the signs from his garage and the popularity of his product has allowed him to expand to Imperial Beach, Chula Vista and San Diego. Most remarkable about his business success is that Freeman is a quadriplegic, the result of a diving accident in 1997. Freeman and his wife, Justine, a Coronado native, moved here from Orange County with their two children in 2012.

Chula Vista-based fine artist Amanda Baris paints in acrylic, pulling from nature for inspiration. A graduate of the Art Institute of Portland, she comes from a family of artists. “I’ve been painting since I was five years old, ” said Baris. “My art is a mix of contemporary art and surrealism; it’s an expression of how I view the world through Mother Nature.” The Coronado Flower Show is her first art exhibition and she is about to launch a website.

When Roanna Canete’s toddler son was diagnosed with multiple food allergies, she began to notice the difficulties of finding good tasting food for him. While living in Italy, she had studied cooking, baking, chocolate making and gelato from a culture that places the highest value on food quality, freshness, taste, and appearance. She used this training to launch a wholesale bakery and custom cake studio as a “cottage industry, ” working from her Coronado home. Now Canete has a 2, 400 square foot production facility in Clairemont serving restaurants and hotels throughout the county. But Canete hasn’t forgotten her community roots! Every Friday delivery trucks come to Coronado to distribute individual orders, taken over her website, coronadosglutenfreepantry.com. At the flower show, she’ll be selling cupcakes, brownies and cookies. There will also be a “cupcake lab” where kids can decorate their own cupcakes. 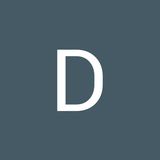 Coronado Magazine is a monthly magazine in Coronado, California for over 30 years. It is published by the Coronado Eagle and Journal which i...

Coronado Magazine is a monthly magazine in Coronado, California for over 30 years. It is published by the Coronado Eagle and Journal which i...