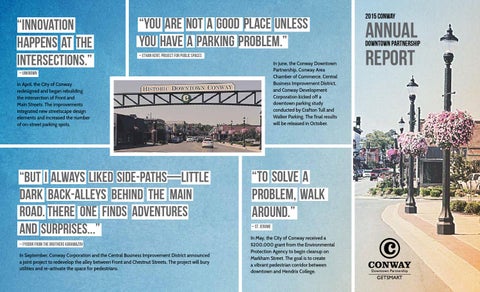 “Innovation happens at the intersections.”

“You are not a good place unless you have a parking problem.” – Ethan Kent, Project for Public Spaces In June, the Conway Downtown Partnership, Conway Area Chamber of Commerce, Central Business Improvement District, and Conway Development Corporation kicked off a downtown parking study conducted by Crafton Tull and Walker Parking. The final results will be released in October.

– unknown In April, the City of Conway redesigned and began rebuilding the intersection of Front and Main Streets. The improvements integrated new streetscape design elements and increased the number of on-street parking spots.

“But I always liked side-paths—little dark back-alleys behind the main road. There one finds adventures and surprises...” – Fyodor from The Brothers Karamazov In September, Conway Corporation and the Central Business Improvement District announced a joint project to redevelop the alley between Front and Chestnut Streets. The project will bury utilities and re-activate the space for pedestrians.

“To solve a problem, walk around.” – St. Jerome In May, the City of Conway received a $200,000 grant from the Environmental Protection Agency to begin cleanup on Markham Street. The goal is to create a vibrant pedestrian corridor between downtown and Hendrix College.

“what is design? it’s where you stand with a foot in two worlds—the world of technology and the world of people and human purposes— and you try to bring the two together.” – mitchell kapor, founder of lotus software Conway Corporation started 2015 by announcing plans to build a 30,000-square-foot building on the corner of Prairie and Locust Streets. The building will be home to Conway Corporation’s IT department and a modern retail space for all Conway Corporation products.

“it’s really wonderful to work in an environment with a lot of smart people.” – Marissa mayer, ceo of yahoo In January, three technology companies – Metova, Eyenalyze, and Big Cloud Analytics – announced they were moving to downtown Conway. The three companies plan to employ 140 in their downtown locations.

“one man’s “magic” is another man’s engineering.” – robert heinlein, Science Fiction author In October, Garver Engineers moved into their new Conway offices at the corner of Oak and Parkway Streets. Garver will manage a number of Conway and Faulkner County projects.

“Innovation – the heart of the knowledge economy – is fundamentally social.”

“Computers are incredibly fast, accurate, and stupid; humans are incredibly slow, inaccurate, and brilliant. Together they are powerful beyond imagination.” – unknown In March, Conway Corporation publicly announced the “Data District” in downtown Conway. The “Data District” provides Internet services up to one gigabit to downtown businesses. The speeds are the fastest in central Arkansas. 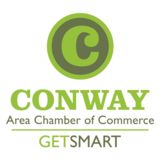