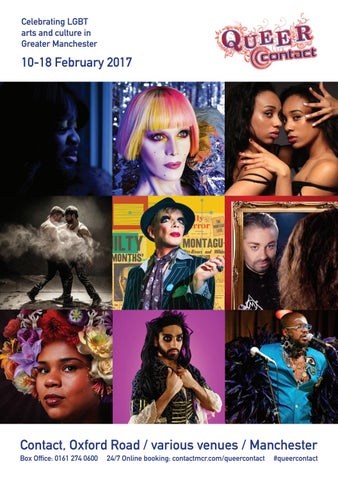 Welcome to Queer Contact Festival 2017 2017 is an important year in British LGBT history as its marks the 60th anniversary of the publication of the Wolfenden Report that recommended that homosexual activity should no longer be a criminal offence. It also marks the 50th anniversary of the decriminalisation of homosexuality. Against this backdrop of historical significance, and the growing impact of worldwide politics on the rights of LGBT people, Queer Contact Festival returns for its ninth year, celebrating Lesbian, Gay, Bisexual and Transgender arts and culture in Greater Manchester as part of LGBT History Month. Expect a packed programme of theatre, music, cabaret, comedy, clubbing, dance, debate, spoken word and visual art examining gender, sexuality, health, religion, politics and more, at venues across Greater Manchester. We do hope you can join us. BARRY PRIEST Festival Producer, Queer Contact

Book more than one show in a single transaction and save some cash!

Buy 10 tickets and get your 11th ticket free!

Book 6 tickets for a show in a single transaction and get £1 off each ticket.

Tickets must be booked in a single transaction, offer cannot be applied retrospectively. Exclusions apply, visit contactmcr.com/ticketoffers for details.

Thank you Thanks to our Funders, Sponsors, and Supporters, and all who have made donations online or in person.

‘There is no greater agony than bearing an untold story inside you.’ Maya Angelou Featuring a repertoire ranging from Wagner and Purcell to Nina Simone and Whitney Houston, Black is an intimate and confessional portrait of Nigerian singer Le Gateau Chocolat’s life: his hopes, his fears and his battle with depression. This is a new version of the critically acclaimed show re-staged for the festival with an 11-piece orchestra. Supported by a Wellcome Trust People Award. Developed and produced by In Company Collective. Manchester performances supported by Superbia and Richmond Tea Rooms. Black was originally commissioned by homotopia and created with funding from Arts Council England and support from Pink Fringe, Nightingale Theatre and Colchester Arts Centre.

A celebration of new transgender performance curated by Kate O’Donnell. Featuring: KATE O’DONNELL: HAYLEY AND ME   Coronation Street’s Hayley Cropper appeared in our living rooms three times a week.  Bringing Hayley back into the limelight, Kate O’Donnell’s cabaret takes a nostalgic look at trans history and the impact of this beloved classic character. Expect music, visuals, audience interaction and an iconic anorak.   ELIJAH HARRIS: BRAND NEW BOY   How does it feel to be a Brand New Boy? Elijah Harris tackles the intricate complexities, and often mundane experiences, of transitioning from female to male in this playful and important performance. Seed commissions originally supported by Pink Fringe. Manchester performances supported by ON Bar.

The Most Depressing Night Of Your Life is a cathartic Power Ballad Disco where belting out the lyrics to the saddest songs and punching clenched fists to the sky are highly encouraged. It’s going to be emotional. Sad songs played by Zoe McVeigh (LIINES) and Rod Connolly (Bollox).

The LGBT community are invited to put their questions to a panel of leaders and experts for this year’s LGBT Question Time. Venue: Manchester Town Hall, Albert Square, Manchester M20 2LA.

QUEER COMEDY NIGHT Hosted by Jonathan Mayor. Tickle your funny bone as some of the UK’s best stand-up comics join us to kick off the second week of the festival in style. With Desiree Burch (Funny Women Winner 2015, Welcome to Night Vale ), Mawaan Rizwan (YouTube sensation / BBC Three How Gay Is Pakistan? ), Sophie Willan (Magners New Act of the Year 2015, On Record ), Debs Gatenby (Hi, Anxiety ), and Toots & Leigh.

An earthy story of courage, conviction and hope, this is Joan of Arc - possibly the world’s first drag king. This multi-award winning show combines lyrical new writing and anarchic cabaret. Drag king champion Lucy Jane Parkinson takes the stage as history’s greatest underdog, dragging up as the men she defies. Winner of a Scotsman Fringe First Award, The Stage Award and Spirit of the Fringe Award 2016.

‘Emotional ballast and cross-dressing that looks like sorcery.’ The Guardian HHHH The Stage HHHH The Scotsman 6

201 DANCE COMPANY: SMOTHER Can you stay true to yourself, when everything suggests you change? After sell-out performances in New York, London and Edinburgh, 201’s raw, contemporary hip-hop movement tours the UK in Smother: a story of two men’s broken encounter. Touching on themes of addiction and obsession, choreographer Andrea Walker directs a cast of seven dancers in a fastpaced, intimate performance exploring the relationship between two young men.

With The Lipsinkers and The House of Ghetto. Commissioned by Contact.

Diamond is an unforgiving queer performance of sexuality and British culture exploring LGBT history from 1957 to 2017 through the personal biography of avant garde performer David Hoyle. Weaving together intimate personal accounts and landmark events, Diamond charts David’s rise from a gay adolescent in Blackpool, through famous Channel 4 anti-drag queen cult phenomena Divine David, to the performer he is today. ‘Bold and unique, electrifying.’ Time Out (on David Hoyle) Supported by Arts Council England and Superbia.

FK ALEXANDER: (I COULD GO ON SINGING) OVER THE RAINBOW

Judy Garland last sang Over The Rainbow four months before her untimely death.  In a unique individual moment of undivided love and attention, FK Alexander takes your hand, fixes your gaze and sings to you alongside that very rendition, amidst the live swirls of Glasgow noise-band Okishima Island Tourist Association.

BAND ON THE WALL PRESENT

The official Mother’s Ruin after-party. Want more? Party into the wee hours with DJs from Manchester’s celebrated underground, including Drunk At Vogue, and experience late night queer performance from Manchester, London and beyond. Film, drag, dance, poetry and more are all on the menu PLUS the return of Dragapella the weirdest and most wonderful drag singing competition around… Hostess is the divine Grace Oni Smith.

A lecture celebrating the life and legacy of iconic superstar David Bowie, journeying through the territory of sex, gender and sexuality; and the sacred and the profane. Venue: Manchester Metropolitan University. 9

Featuring David McAlmont, Baby Sol and MD Janette Mason. Queer Contact’s grand finale commemorates the gender-fluid extravagance of groundbreaking superstar and queer icon Prince. With a back catalogue more rich and varied than perhaps any other recording artist, Prince is one of the most influential artists of his generation. David McAlmont & Baby Sol star on vocals as the festival parties ‘like it’s 1999!’. 10

Manchester based creative duo Lill & Rudy are FAKE TRASH. Together they’ll explore the meaning of what it is to be bad in a vibrant new photographic exhibition marrying queer culture and high concept fashion.

Image © CYC: The Third Side by Roshana Rubin-Mayhew

Commissioned by Contact. Photography by Beyond Beyond. Produced in partnership with The Proud Trust. To complement our Queer Youth Gathering programme (see P5), artists have been working alongside LGBT young people from across Greater Manchester for the past several months. Join us to experience new video and photography that shines a light on the issues affecting their lives. Supported by Big Lottery Fund and Superbia.

Contact is a registered charity, 501953. All info correct at time of going to print. Designed by www.grahamedesigns.com 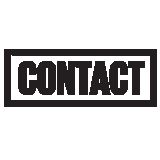