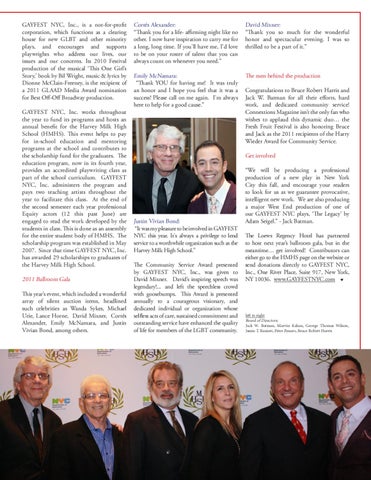 GAYFEST NYC, Inc., is a not-for-profit corporation, which functions as a clearing house for new GLBT and other minority plays, and encourages and supports playwrights who address our lives, our issues and our concerns. Its 2010 Festival production of the musical ‘This One Girl’s Story,’ book by Bil Wright, music &amp; lyrics by Dionne McClain-Freeney, is the recipient of a 2011 GLAAD Media Award nomination for Best Off-Off Broadway production. GAYFEST NYC, Inc. works throughout the year to fund its programs and hosts an annual benefit for the Harvey Milk High School (HMHS). This event helps to pay for in-school education and mentoring programs at the school and contributes to the scholarship fund for the graduates. The education program, now in its fourth year, provides an accredited playwriting class as part of the school curriculum. GAYFEST NYC, Inc. administers the program and pays two teaching artists throughout the year to facilitate this class. At the end of the second semester each year professional Equity actors (12 this past June) are engaged to read the work developed by the students in class. This is done as an assembly for the entire student body of HMHS. The scholarship program was established in May 2007. Since that time GAYFEST NYC, Inc. has awarded 29 scholarships to graduates of the Harvey Milk High School.

Cortés Alexander: “Thank you for a life- affirming night like no other. I now have inspiration to carry me for a long, long time. If you&#39;ll have me, I&#39;d love to be on your roster of talent that you can always count on whenever you need.”

David Mixner: “Thank you so much for the wonderful honor and spectacular evening. I was so thrilled to be a part of it.”

Emily McNamara: “Thank YOU for having me! It was truly an honor and I hope you feel that it was a success! Please call on me again. I&#39;m always here to help for a good cause.”

The men behind the production Congratulations to Bruce Robert Harris and Jack W. Batman for all their efforts, hard work, and dedicated community service! Connextions Magazine isn’t the only fan who wishes to applaud this dynamic duo… the Fresh Fruit Festival is also honoring Bruce and Jack as the 2011 recipients of the Harry Wieder Award for Community Service.

Justin Vivian Bond: “It was my pleasure to be involved in GAYFEST NYC this year. It&#39;s always a privilege to lend service to a worthwhile organization such as the Harvey Milk High School.” The Community Service Award presented by GAYFEST NYC, Inc., was given to David Mixner. David’s inspiring speech was legendary!... and left the speechless crowd with goosebumps. This Award is presented annually to a courageous visionary, and dedicated individual or organization whose selfless acts of care, sustained commitment and outstanding service have enhanced the quality of life for members of the LGBT community.

“We will be producing a professional production of a new play in New York City this fall, and encourage your readers to look for us as we guarantee provocative, intelligent new work. We are also producing a major West End production of one of our GAYFEST NYC plays, ‘The Legacy’ by Adam Seigel.” - Jack Batman. The Loews Regency Hotel has partnered to host next year’s ballroom gala, but in the meantime… get involved! Contributors can either go to the HMHS page on the website or send donations directly to GAYFEST NYC, Inc., One River Place, Suite 917, New York, NY 10036. www.GAYFESTNYC.com 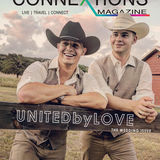