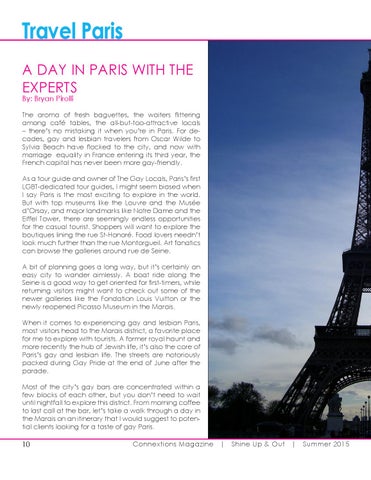 Travel Paris A DAY IN PARIS WITH THE EXPERTS By: Bryan Pirolli

The aroma of fresh baguettes, the waiters flittering among café tables, the all-but-too-attractive locals – there’s no mistaking it when you’re in Paris. For decades, gay and lesbian travelers from Oscar Wilde to Sylvia Beach have flocked to the city, and now with marriage equality in France entering its third year, the French capital has never been more gay-friendly. As a tour guide and owner of The Gay Locals, Paris’s first LGBT-dedicated tour guides, I might seem biased when I say Paris is the most exciting to explore in the world. But with top museums like the Louvre and the Musée d’Orsay, and major landmarks like Notre Dame and the Eiffel Tower, there are seemingly endless opportunities for the casual tourist. Shoppers will want to explore the boutiques lining the rue St-Honoré. Food lovers needn’t look much further than the rue Montorgueil. Art fanatics can browse the galleries around rue de Seine. A bit of planning goes a long way, but it’s certainly an easy city to wander aimlessly. A boat ride along the Seine is a good way to get oriented for first-timers, while returning visitors might want to check out some of the newer galleries like the Fondation Louis Vuitton or the newly reopened Picasso Museum in the Marais. When it comes to experiencing gay and lesbian Paris, most visitors head to the Marais district, a favorite place for me to explore with tourists. A former royal haunt and more recently the hub of Jewish life, it’s also the core of Paris’s gay and lesbian life. The streets are notoriously packed during Gay Pride at the end of June after the parade. Most of the city’s gay bars are concentrated within a few blocks of each other, but you don’t need to wait until nightfall to explore this district. From morning coffee to last call at the bar, let’s take a walk through a day in the Marais on an itinerary that I would suggest to potential clients looking for a taste of gay Paris.