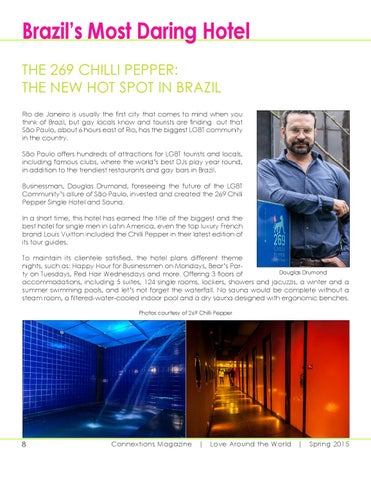 Brazil’s Most Daring Hotel T​ HE 269 CHILLI PEPPER: THE NEW HOT SPOT IN BRAZIL Rio de Janeiro is usually ​the first ​city that comes to mind when you think of Brazil, ​but gay locals know and tourists are finding out that​​ São Paulo, about 6 hours east of Rio, ​has the biggest LGBT community in the country. São Paulo offers hundreds of ​attractions​for LGBT tourists and locals,​ including famous clubs​,​where the ​world’s ​best DJs play ​year round,​ in addition to the trendiest restaurants and gay bars i​n Brazil. ​ usinessman, Douglas Drumond, foreseeing the future of ​the LGBT B Community’s allure of São Paulo​, invested and created the 269 Chilli Pepper Single​Hotel and Sauna. In a short time, this hotel has ​earned the title of the biggest and the best hotel for single men in Latin America, even the top luxury French brand Louis Vuitton included the Chilli Pepper in the​ir latest e ​ dition of its tour guides. T​ o maintain its clientele satisfied, the hotel plans different theme nights, such as: Happy Hour for Businessmen on Mondays, Bear’s ParDouglas Drumond ty on Tuesdays, Red Hair Wednesday​s and more.​ ​​Offering ​3 floors of​ accommodations, including 5 suites, 124 single rooms, lockers, showers and jacuzzis, a winter and a summer swimming pools, and let’s not forget the waterfall. No sauna would be complete without a steam room, a filtered-water-cooled indoor pool and a dry sauna designed with ergonomic benches. Photos courtesy of 269 Chilli Pepper

Love Around the World