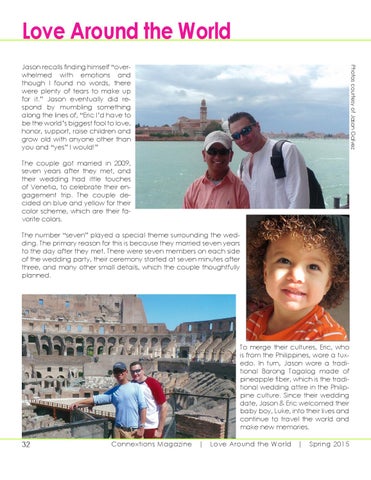 Love Around the World Photos courtesy of Jason Galvez

Jason recalls finding himself “overwhelmed with emotions and though I found no words, there were plenty of tears to make up for it.” Jason eventually did respond by mumbling something along the lines of, “Eric I’d have to be the world’s biggest fool to love, honor, support, raise children and grow old with anyone other than you and “yes” I would!” The couple got married in 2009, seven years after they met, and their wedding had ittle touches of Venetia, to celebrate their engagement trip. The couple decided on blue and yellow for their color scheme, which are their favorite colors. The number “seven” played a special theme surrounding the wedding. The primary reason for this is because they married seven years to the day after they met. There were seven members on each side of the wedding party, their ceremony started at seven minutes after three, and many other small details, which the couple thoughtfully planned.

To merge their cultures, Eric, who is from the Philippines, wore a tuxedo. In turn, Jason wore a traditional Barong Tagalog made of pineapple fiber, which is the traditional wedding attire in the Philippine culture. Since their wedding date, Jason & Eric welcomed their baby boy, Luke, into their lives and continue to travel the world and make new memories.

Love Around the World