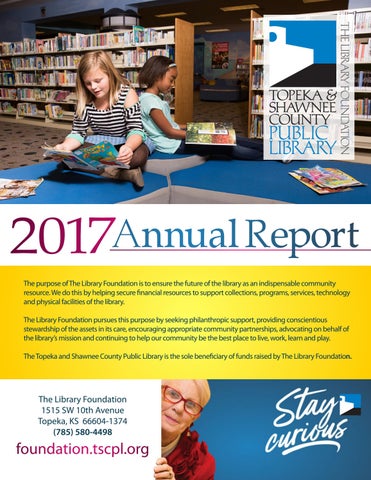 2017Annual Report The purpose of The Library Foundation is to ensure the future of the library as an indispensable community resource. We do this by helping secure financial resources to support collections, programs, services, technology and physical facilities of the library. The Library Foundation pursues this purpose by seeking philanthropic support, providing conscientious stewardship of the assets in its care, encouraging appropriate community partnerships, advocating on behalf of the library’s mission and continuing to help our community be the best place to live, work, learn and play. The Topeka and Shawnee County Public Library is the sole beneficiary of funds raised by The Library Foundation.

Dear Friends, The Library Foundation’s 2017 Annual Report is bound to peek your curiosity when you read about how your gifts have made a difference at the Topeka and Shawnee County Public Library. We have amazing stories to share. Together we are helping the library fulfill its new mission of “sparking curiosity and connecting our community through literacy and learning.” As a foundation, we are committed to providing the funds needed beyond what tax dollars can do for our library. The funds will help accomplish the library’s most important community impact goal Every child will be ready for kindergarten. One of the best examples of fulfilling this goal is our incredible support for Dolly Parton’s Imagination Library. We received donations by individuals made at Topeka Gives and through our direct mail campaign. Grants have been given by Security Benefit, Capitol Federal Foundation, US Bank, St. Francis Health Foundation, Cox Charities, Topeka Community Foundation and the Friends of the Library. We received gifts from a number of organizations and events including the local chapter of The Topeka Council of the International Reading Association, the Topeka Chapter of Links and the trivia event with FHLBank. All of these gifts will help us sustain Imagination Library for several years to come.

When you review our donor list you will see a number of gifts made in someone’s honor or memory. The family of Helen Jensen asked us to use the gifts made in her memory for Dolly Parton’s Imagination Library. Helen was a retired first grade teacher who continued to volunteer in the schools. Helen&#39;s love of children and reading will live on through her memorial gifts.

We are thrilled for the $1 million gift of Dr. Glenn Swogger for the expansion of the Millennium Café. Construction of Claire’s Courtyard begins this summer. A commemorative brick project in the Courtyard is planned and will be announced this spring.

The new team rooms in the reference area of the library are fulfilling a need for small group meetings. We thank Warren Taylor for becoming the first to provide a contribution to name one of the rooms. If you would like to name a team room in someone’s honor or memory, please contact the foundation office.

We are so proud of what your gifts have helped accomplish. For 35 years the Topeka community has allowed The Library Foundation to manage their gifts to our library. With your trust and partnership, we aspire to do even more in the next 35 years. Thank you for your support!

Why do you love your library? We live at Evergreens at Brewster Place and really appreciate the Library bringing books on a regular basis direct to our door.

So thankful for the Red Carpet &amp; Megan. Ruth Stone

The bi-monthly visits from the bookmobile with Jim &amp; Tanya!

hanks to overwhelming donor support, Dolly Parton’s Imagination Library launched in Shawnee County in April 2017. This program is a free book program for children birth to age five. The Dollywood Foundation mails a new book in the child’s name directly to their home once a month. The Topeka and Shawnee County Public Library and United Way of Greater Topeka are making Imagination Library available to all children in Shawnee County to help prepare them for kindergarten. It costs $25 to mail one year of books (12 books) to a child. For two years, donors were encouraged to give &quot;The Gift of Reading” to provide sustainable funding for this program. By the end of 2017, we raised $475,000. Along with the $100,000 raised by the United Way, a total of $575,000 has been raised. In two years of fundraising, we have surpassed our five-year goal of $500,000 and are well on our way to the $1 million needed to sustain the program. “Dolly Parton’s Imagination Library has been shown to improve early childhood literacy for children in the program,” said Gina Millsap, library CEO. “Community donors have really

stepped up to underwrite the costs of providing this program for Shawnee County children.” At the end of 2017, 3,600 of the 12,519 eligible children are registered. This level of registration wasn’t expected until October 2018 according to the Dollywood Foundation. The Library Foundation and United Way of Greater Topeka will continue fundraising to reach the goal of $1 million to sustain this program and help develop eager learners ready for kindergarten. If you know a child under the age of five who is not registered yet for the program, please encourage their parent to sign-up at the library or online at tscpl.org/imagination. Thank you for your generous support for this program.

BNSF Foundation Recognized The BNSF Railway Foundation was recognized as Outstanding Foundation at the Association of Fundraising Professionals Topeka Chapter’s Philanthropy Day Luncheon in November 2017. The Library Foundation nominated them for providing much needed funding for Dolly Parton’s Imagination Library. Last spring BNSF Railway Foundation supported The Library Foundation by joining many other library donors in underwriting the cost of Dolly Parton’s Imagination Library in Shawnee County. This donation provided funding for 400 children to get the best start possible for success in school and life.

Harder IREAD Program More kindergarteners than ever before are My ard receiving their Librar y C first library card as a result of the Robert C. and Dorothy L. Harder IREAD initiative. This program gets library cards in the hands of our newest independent readers. To date, 857 children in 15 elementary schools received IREAD library cards, a special holder and a new book thanks to the Harder IREAD fund. Harder IREAD project

BNSF Railway Foundation had a unique opportunity to provide children with their first book, The Little Engine That Could by Watty Piper. This is one of the greatest tales used to teach children the value of optimism and hard work. In this well-loved classic, the Little Blue Engine&#39;s rallying mantra &quot;I think I can--I think I can&quot; resonates for a lifetime in the head of every child who hears it. Thank you BNSF Railway Foundation!

A Gift of Property

In 2016, Sisters of Charity of Leavenworth Health System (St. Francis Health) donated the Marion Clinic property at 10th and Garfield just west of the library. This property is offering the opportunity to provide much needed additional parking for the approximately 3,000 people who visit the library daily. In 2017 and 2018, funds from the estate gift of Robert M. and Hazel F. Lingo are paying the associated costs of constructing the parking lot. Their gift from 2000 continues to provide funds to assist in improvements to the library facilities.

Building relationships, family engagement and increased library card usage are all due to The Library Foundation’s many donors in support of the Harder Book Fund. For years, Bob and Dottie gave books to Lowman Hill Elementary School students during the holidays, and Bob volunteered as a reader. To honor Bob’s love and investment in children, in 2014 the Topeka and Shawnee County Public Library renamed the IREAD Kindergarten program.

THE TAYLOR ROOM Warren Taylor is an excellent example of the phrases “create a living legacy” and “demonstrate a commitment.” He is the first person to make a gift to name one of the eight Team Rooms just completed as part of the library’s 10-year Facilities Master Plan. Warren loves his library!

Before the Team Rooms were completed, Warren made a commitment for Room #3. The room is named the Taylor Room in honor of Warren and in memory of his mother, Velva C. Taylor. Warren recalls his mother “enjoyed hanging out at the library when I was in charge of the Friday night movies. She was always very supportive and loved anything at the library.” Warren retired from the library in 2004 after 34 years in charge of the Topeka Room, genealogy and the local history collection. Now he is an indispensable volunteer for the Friends of the Library. For years, Warren chaired the Friends’ annual book sale and served on the Friends’ Board including as president in 2009-2010. Warren is one of the founders of The Library Foundation’s Wilder Society joining in 2004. Warren said, “We all have special places in our hearts for the things that have been most important to us. For me the library is such a place. As a member of the Wilder Society, I am pleased to join with many others in proclaiming my enthusiasm for it.”

Early benefactors, Edward and Mary Wilder, helped raise funds to build the first permanent library in Topeka. Their memorial gifts to the library created the first public art collection in the city. In 1998, The Library Foundation created the Edward and Mary Wilder Society. We give special thanks to those who are securing the future of our awesome library by including The Library Foundation in your estate plans or making an annual lifetime gift. CHARTER MEMBERS

The Library Foundation gratefully acknowledges the following individuals and organizations who supported The Library Foundation in 2017. Every effort has been made to ensure the accuracy of this listing. If there are any oversights, please contact the foundation office. To support The Library Foundation, donate online at foundation.tscpl.org and sign up for our quarterly news updates, email foundation@tscpl.org or call 785-580-4498. If a donation was made in 2017, that amount was added to each donor’s previous gifts and their name is listed here by cumulative giving level: INDIVIDUAL CUMULATIVE GIVING LEVELS: (INCLUDES IN-KIND GIFTS) $100,000 + Dr. Phillip and Mrs. Betty Baker Susan and Kent Garlinghouse The Estate of G. Lester Jordan, Jr.* Dr. Jo Ann Myers Dr. Glenn and Mrs. Claire* Swogger $50,000 – $99,999 Dr. Walter Menninger $25,000 – $49,999 Dick and Donna Crawford Dr. Robert and Mrs. Frankie Parman Bob and Kerry Onstott Storey Warren Taylor James Van Sickle $10,000 – $24,999 Richard and Linda Hayse

Why do you love your library?

Why do you love your library?

Red Carpet is what I’m grateful for. Nancy Craig

Dick and Donna Crawford In 2017, Topeka and Shawnee County Public

Glenn Swogger’s $1 million gift for Claire’s Courtyard was announced at the 2017 Wilder Society Tea. Named after Glenn’s beloved late wife Claire, this new outdoor area will be built on the west side of the library. The plans include an outdoor eating area, amphitheater and pavilion. You might even see a waterfall. Claire’s Courtyard will be completed by the end of 2018.

In 1999, Glenn and Claire Swogger Dr. Glenn Swogger made a gift for the naming opportunity of the library’s café. They chose the name “Millennium Café” to convey a sense of hope for the future. Claire’s Courtyard will certainly open the door to many possibilities in the library’s future. This is a wonderful gift from Glenn and his Redbud Foundation. 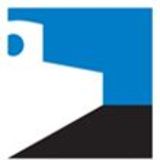