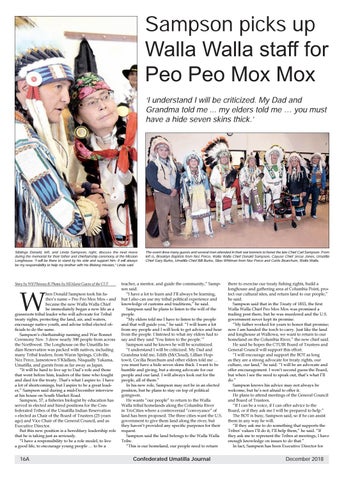 Sampson picks up Walla Walla staff for Peo Peo Mox Mox ‘I understand I will be criticized. My Dad and Grandma told me ... my elders told me … you must have a hide seven skins thick.’

Siblings Donald, left, and Linda Sampson, right, discuss the next move during the memorial for their father and chieftainship ceremony at the Mission Longhouse. “I will be there to stand by his side and support him. It will always be my responsibility to help my brother with his lifelong mission,” Linda said.

hen Donald Sampson took his father’s name – Peo Peo Mox Mox - and became the new Walla Walla Chief he immediately began a new life as a grassroots tribal leader who will advocate for Tribal treaty rights, protecting the land, air, and waters, encourage native youth, and advise tribal elected officials to do the same. Sampson’s chieftainship naming and War Bonnet Ceremony Nov. 3 drew nearly 300 people from across the Northwest. The Longhouse on the Umatilla Indian Reservation was packed with natives, including many Tribal leaders, from Warm Springs, Colville, Nez Perce, Jamestown S’Klallam, Nisqually Yakama, Umatilla, and guests from as far away as Japan. “It will be hard to live up to Dad’s role and those that went before him, leaders of the time who fought and died for the treaty. That’s what I aspire to. I have a lot of shortcomings, but I aspire to be a great leader,” Sampson said during a mid-December interview at his house on South Market Road. Sampson, 57, a fisheries biologist by education has served in elected and hired positions for the Confederated Tribes of the Umatilla Indian Reservation – elected as Chair of the Board of Trustees (25 years ago) and Vice Chair of the General Council, and as Executive Director. But this new position is a hereditary leadership role that he is taking just as seriously. “I have a responsibility to be a role model, to live a good life, to encourage young people … to be a

teacher, a mentor, and guide the community,” Sampson said. “I have a lot to learn and I’ll always be learning, but I also can use my tribal political experience and knowledge of customs and traditions,” he said. Sampson said he plans to listen to the will of the people. “My elders told me I have to listen to the people and that will guide you,” he said. “I will learn a lot from my people and I will look to get advice and hear from the people. I listened to what my elders had to say and they said ‘You listen to the people.’” Sampson said he knows he will be scrutinized. “I understand I will be criticized. My Dad and Grandma told me, Edith (McCloud), Lillian Hoptowit, Cecilia Bearchum and other elders told me … you must have a hide seven skins thick. I want to be humble and giving, but a strong advocate for our people and our land. I will always look out for the people, all of them.” In his new role, Sampson may not be in an elected position, but he plans to stay on top of political goings-on. He wants “our people” to return to the Walla Walla tribal homelands along the Columbia River in Tri-Cities where a controversial “conveyance” of land has been proposed. The three cities want the U.S. government to give them land along the river, but they haven’t provided any specific purposes for their request. Sampson said the land belongs to the Walla Walla Tribe. “This is our homeland, our people need to return

there to exercise our treaty fishing rights, build a longhouse and gathering area at Columbia Point, protect our cultural sites, and return land to our people,” he said. Sampson said that in the Treaty of 1855, the first Walla Walla Chief Peo Mox Mox was promised a trading post there, but he was murdered and the U.S. government never kept its promise. “My father worked for years to honor that promise; now I am handed the torch to carry. Just like the land and longhouse at Wallowa, we want to return to our homeland on the Columbia River,” the new chief said. He said he hopes the CTUIR Board of Trustees and General Council will support this effort. “I will encourage and support the BOT as long as they are a strong advocate for treaty rights, our culture, our land,” he said. “I will be an advocate and offer encouragement. I won’t second guess the Board, but when I see the need to speak out, that’s what I’ll do.” Sampson knows his advice may not always be welcome, but he’s not afraid to offer it. He plans to attend meetings of the General Council and Board of Trustees. “If I can be a voice, if I can offer advice to the Board, or if they ask me I will be prepared to help.” The BOT is busy, Sampson said, so if he can assist them in any way he will. “If they ask me to do something that supports the Tribes’ values I’ll do it, I’ll help them,” he said. “If they ask me to represent the Tribes at meetings, I have enough knowledge on issues to do that.” In fact, Sampson has been Executive Director for 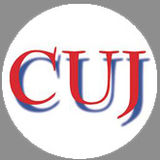