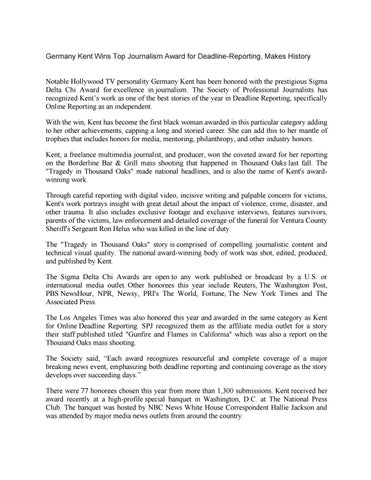 Notable Hollywood TV personality Germany Kent has been honored with the prestigious Sigma Delta Chi Award for excellence in journalism. The Society of Professional Journalists has recognized Kent’s work as one of the best stories of the year in Deadline Reporting, specifically Online Reporting as an independent. With the win, Kent has become the first black woman awarded in this particular category adding to her other achievements, capping a long and storied career. She can add this to her mantle of trophies that includes honors for media, mentoring, philanthropy, and other industry honors. Kent, a freelance multimedia journalist, and producer, won the coveted award for her reporting on the Borderline Bar &amp; Grill mass shooting that happened in Thousand Oaks last fall. The &quot;Tragedy in Thousand Oaks&quot; made national headlines, and is also the name of Kent&#39;s awardwinning work. Through careful reporting with digital video, incisive writing and palpable concern for victims, Kent&#39;s work portrays insight with great detail about the impact of violence, crime, disaster, and other trauma. It also includes exclusive footage and exclusive interviews, features survivors, parents of the victims, law enforcement and detailed coverage of the funeral for Ventura County Sheriff&#39;s Sergeant Ron Helus who was killed in the line of duty. The &quot;Tragedy in Thousand Oaks&quot; story is comprised of compelling journalistic content and technical visual quality. The national award-winning body of work was shot, edited, produced, and published by Kent. The Sigma Delta Chi Awards are open to any work published or broadcast by a U.S. or international media outlet. Other honorees this year include Reuters, The Washington Post, PBS NewsHour, NPR, Newsy, PRI&#39;s The World, Fortune, The New York Times and The Associated Press. The Los Angeles Times was also honored this year and awarded in the same category as Kent for Online Deadline Reporting. SPJ recognized them as the affiliate media outlet for a story their staff published titled &quot;Gunfire and Flames in California&quot; which was also a report on the Thousand Oaks mass shooting. The Society said, “Each award recognizes resourceful and complete coverage of a major breaking news event, emphasizing both deadline reporting and continuing coverage as the story develops over succeeding days.” There were 77 honorees chosen this year from more than 1,300 submissions. Kent received her award recently at a high-profile special banquet in Washington, D.C. at The National Press Club. The banquet was hosted by NBC News White House Correspondent Hallie Jackson and was attended by major media news outlets from around the country.

&quot;I am deeply humbled and grateful to receive such a prestigious award from one of the most respected journalism organizations in the country. To be recognized by my peers is an incredible honor and that makes this award very special,&quot; Kent said. Kent has earned many accolades as a national bestselling author. The media maven is also a successful actress who has appeared in commercials, primetime shows, and films. Kent also has an impressive portfolio as a red carpet host in Hollywood where she has interviewed countless celebrities, politicians, sports moguls and newsmakers. Her work appears on various websites from different industries and she has been cited in major publicationssuch as Forbes, Bloomberg, Yahoo! News, MSN, The Dallas Morning News, Inc. Magazine and Fast Company.

Notable Hollywood TV personality Germany Kent has been honored with the prestigious Sigma Delta Chi Award for excellence in journalism. The Society of Professional Journalists has recognized Kent’s work as one of the best stories of the year in Deadline Reporting, specifically Online Reporting as an independent. For details visit: https://www.spj.org/sdxa18.asp 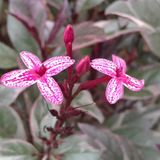