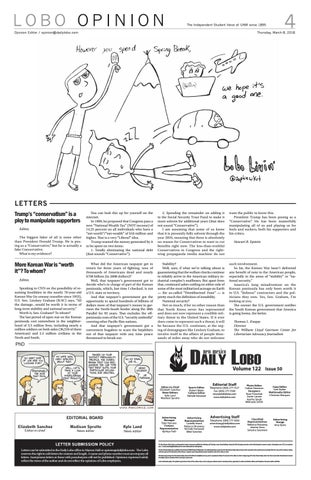 The Independent Student Voice of UNM since 1895

LETTERS Trump’s “conservatism” is a ploy to manipulate supporters Editor, The biggest faker of all is none other than President Donald Trump. He is posing as a “Conservative,” but he is actually a fake Conservative. What is my evidence?

More Korean War is “worth it”? To whom? Editor, Speaking to CNN on the possibility of resuming hostilities in the nearly 70-year-old Korean War (in uneasy ceasefire since 1953), U.S. Sen. Lindsey Graham (R-SC) says, “All the damage...would be worth it in terms of long-term stability and national security.” Worth it, Sen. Graham? To whom? The last period of open war on the Korean peninsula cost somewhere in the neighborhood of 3.5 million lives, including nearly a million soldiers on both sides (36,516 of them American) and 2.5 million civilians in the North and South.

You can look this up for yourself on the internet. In 1999, he proposed that Congress pass a new “National Wealth Tax” (NOT income) of 14.25 percent on all individuals who have a “net-worth”/“net-wealth” of $10 million and higher. That is a very “Liberal” idea. Trump wanted the money generated by it to be spent on two items: 1. Totally eliminating the national debt (that sounds “Conservative”).

2. Spending the remainder on adding it to the Social Security Trust Fund to make it more solvent for additional years (that does not sound “Conservative”). I am assuming that some of us know that it is presently fully solvent through the year 2034, meaning that there is absolutely no reason for Conservatives to want to cut benefits right now. The less-than-truthful Conservatives in Congress and the rightwing propaganda media machine do not

want the public to know this. President Trump has been posing as a “Conservative”. He has been masterfully manipulating all of us and playing us for fools and suckers, both his supporters and his critics.

Stability? Well, sure, if what we’re talking about is guaranteeing that the welfare checks continue to reliably arrive in the American military industrial complex’s mailboxes. But apart from that, continued saber-rattling on either side of some of the most militarized acreage on Earth — the so-called “Demilitarized Zone” — is pretty much the definition of instability. National security? Not so much, if for no other reason than that North Korea never has represented and does not now represent a credible military threat to the United States. If it ever does come to represent such a threat, it will be because the U.S. continues, at the urging of demagogues like Lindsey Graham, to involve itself in the affairs of people thousands of miles away who do not welcome

such involvement. So far, the Korean War hasn’t delivered any benefit of note to the American people, especially in the areas of “stability” or “national security.” America’s long misadventure on the Korean peninsula has only been worth it to U.S. “defense” contractors and the politicians they own. Yes, Sen. Graham, I’m looking at you. The sooner the U.S. government notifies the South Korean government that America is going home, the better.

LETTER SUBMISSION POLICY Letters can be submitted to the Daily Lobo office in Marron Hall or opinion@dailylobo.com. The Lobo reserves the right to edit letters for content and length. A name and phone number must accompany all letters. Anonymous letters or those with pseudonyms will not be published. Opinions expressed solely reflect the views of the author and do not reflect the opinions of Lobo employees.