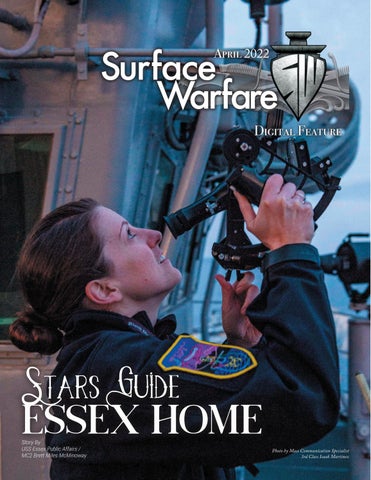 We operated for over 1,800 nautical miles without our most advanced systems, using technology from the 18th century, and we showed up on time and on track. – Lt. Cmdr. Caroline Stanton

Sailors aboard the amphibious assault ship USS Essex (LHD 2) used celestial navigation (CELNAV) to travel more than 1,800 nautical miles while underway in the U.S. 3rd Fleet. Guided by the stars, moon, sun, and planets, the ship’s crew successfully steamed from Pearl Harbor, Hawaii, to the San Diego area of operations without any GPS assistance or electronic systems for six days during Essex’s Western Pacific 2021-2022 deployment. “GPS satellites are vulnerable to destruction and jamming, but sextants and paper charts are not,” said Walt O’Donnell, a Surface Navigator (SURFNAV) course supervisor at Surface Warfare Officers School Command (SWOSCOLCOM), embarked aboard Essex. “We operated for over 1,800 nautical miles without our most advanced systems, using technology from the 18th century, and we showed up on time and on track. I am confident that Essex could cross the entire Pacific Ocean using the same techniques if it had to.”

Lt. Cmdr. Caroline Stanton, a native of Dowagiac, Michigan, navigator aboard Essex, originally proposed the idea prior to Essex’s deployment. She planned to gather data from the sky using a sextant, have her quartermasters aid in plotting the course, and have the helmsmen and Officers of the Deck (OODs), guide the ship according to her calculations instead of using Voyage Management System (VMS), an electronic mapping program similar to mapping apps on most smart phones. To ensure a 100 percent electronic-free voyage, her plan included making all calculations by hand and having the navigation team plot the celestial fixes on paper as opposed to relying on the Navy’s navigational computation system, known as STELLA. She explains the gravity of navigators being able to use CELNAV in the event that modern navigational methods become unavailable. “If you’re out in the open ocean and you have no GPS, no land for radar, no visual reference points for bearing, and all you see is water around you – how do you know where you are? Or how to get to where you want to be? You have to use celestial sights,” said Stanton

The first step in navigating the 847 foot-long, 45,000 ton, multi-billion dollar warship and her approximated 3,000 crew members without electronic aid for almost 2000 nautical miles was for Stanton to get permission from Essex’s Commanding Officer, Capt. Kelly Fletcher. “Most commanding officers would’ve said, ‘that’s a great idea, but it’s too risky. You can do CELNAV, but the OODs need VMS to steer,’” said Stanton. “Capt. Fletcher knows the reality of potentially losing navigation sources. As GPS denial and degradation capabilities increase from our adversaries, we have to get ahead of it or plan around it so we can still operate our Navy all over the world. She’s a forward-thinker in that way.” As her right hand, Stanton embarked the help of O’Donnell, a fellow subject matter expert, who served as navigator aboard amphibious transport dock USS Anchorage (LPD 23) from 2014 to 2015. He currently serves as a SURFNAV course supervisor at SWOSCOLCOM in Newport, R.I., specializing in teaching CELNAV. “Professionally, I wanted to prove that the Navy has capable navigators who can operate without complicated electronic systems,” said O’Donnell, a native of Hingham, Massachusetts. “We proved that the Navy does have [at least] one of those navigators, Lt. Cmdr. Stanton, and I bet there are a few more of them out there. They just haven’t been given the opportunity to prove themselves yet. Maybe Capt. Fletcher’s example will inspire other commanding officers to do the same.” While trusting in her navigation team, Fletcher, a native of West Hempstead, New York, still needed to implement security measures to ensure the ship and crew’s safe passage in case CELNAV was unsuccessful. Naval governing guidance for navigating requires ships to log their position, but the location was never shared with Stanton’s navigation team or bridge watch standers. They were required to guide the ship completely by the Navigator’s instructions.

I watched many Essex quartermasters shoot their own sun lines with a sextant, have Lt. Cmdr. Stanton or I calculate them, and then plot our position on a paper chart. – Mr. Walt O’Donnell, Surface Navigator Course Supervisor, Surface Warfare Officers School Command

While Stanton and O’Donnell navigated the ship from the bridge, watch standers in the Combat Information Center, or “Combat,” aboard Essex silently tracked the ship’s progress on GPS and VMS. If Essex traveled 10 nautical miles or more off its expected course, Combat had orders to intervene and get Essex back on track. “The expectation was that we could do it, but we had to build in some safeties,” said Stanton. “We had to keep the ship’s position log as required by Navy doctrine, and Combat would watch us but provide no recommendations unless the ship got 10 nautical miles off track. But we couldn’t use GPS at all to get back. I didn’t even know where we were until I got a fix. At any given time I knew the approximate latitude and longitude of the ship, but not to the degree of decimal places like GPS does.”

While the ship operates with different influences affecting it like current, wind, and human error among watch standers, steering a single degree off for a few hours makes a massive difference where you end up. “Every decision made for the course or speed change had to be intentional,” said Stanton. Yet over the course of her nearly-2,000 nautical miles voyage, Essex averaged a margin of only two nautical miles off track at any given time. Stanton stated, “On only one occasion did I get as far as five nautical miles off track, which was immediately corrected.” “While that may sound like a lot, five miles is nothing in the middle of the Pacific Ocean,” said O’Donnell. “Overall, Lt. Cmdr. Stanton was the key to this success. If she had taken the easy way out and had given in to the administrative burdens of being the Navigator, instead of spending countless hours training her bridge watch standers and quartermasters, then Essex would not have been prepared for such a daunting undertaking.” While several bridge team members attest to Stanton’s continuous CELNAV mentoring and training for watch standers since she came aboard in April 2021, the in-depth formal training and preparations for this voyage began at the start of deployment. “I watched many Essex quartermasters shoot their own sun lines with a sextant, have Lt. Cmdr. Stanton or I calculate them, and then plot our position on a paper chart,” said O’Donnell. “And they had that capability before I showed up, because Stanton and Chief Quartermaster Hamilton spent many hours teaching them these skills.” Stanton said she had the quartermasters and OODs keep separate celestial plots and dead reckonings, or predicted position based on courses steered and distance run from a last known position, from San Diego all the way to Guam, then again from Japan to Hawaii, during the beginning of the deployment. This was all to train them for the final leg of the journey back home.

There’s this history that’s in our blood as Sailors - that those who went before us navigated their ships by the stars. – Lt. Cmdr. Caroline Stanton

“By the time we made this voyage, they knew what they were doing,” said Stanton. “I can’t state the value of the team enough, truly. Basically since the beginning of deployment they’ve been practicing this skill. That was the only way we could have done it because it requires so much accuracy. They were ready by the time we did it; it’s something they can be really proud of.” Completing the voyage was a combined effort of not only the navigators, Stanton and O’Donnell, but also the team of quartermasters keeping accurate plots, the OODs interpreting and carrying out the planned route, and boatswain’s mates standing helmsman watch to steer the ship true. All stations were manned 24 hours a day to ensure Essex’s safe and expeditious transit from Pearl Harbor to her home port in San Diego. “When you think of it from a bird’s eye view that a navigator got a ship - a multibillion dollar asset - over 1,800 nautical miles from Hawaii to the continental U.S. using only celestial bodies, I think that sounds tremendously amazing,” said Stanton. “Knowing we have a capital asset that we can deliver across a long voyage using no electronics is a huge deal, and providing value to the Navy so it can improve after I leave is very fulfilling. I’m very proud of that and thankful for the opportunity.” While Fletcher and the crew attribute the

successful venture to their navigator, Stanton credits the highly capable crew, especially their commanding officer. Stanton said CELNAV was extremely risky for Fletcher because if the Navigator didn’t do well, then the Commanding Officer would take the fall for the risky decision. “It took so much backbone for the captain to say yes,” said Stanton. “It takes an intelligent, competent, and really careful person to analyze a plan and know what proper safeties to build in. There’s a fine line between being brave and innovative and being reckless. The Navy doesn’t want someone reckless, but we can’t grow without taking risks. And that’s what the Captain did. That’s what needs to be rewarded the most – not what I’ve done as the navigator, but Capt. Fletcher saying, ‘yes, you have my blessing. Go ahead.’” Stanton said she believes CELNAV will play a larger role in the way the Navy trains future navigators. Essex’s successful and timely arrival in San Diego with extreme precision demonstrates the U.S. Navy’s ability to operate without GPS and electronic charts with several lessons learned along the way. These will be used to update course curriculum across the fleet and help better equip Navy surface navigators for celestial navigation, she said. “There’s this history that’s in our blood as Sailors - that those who went before us navigated their ships by the stars,” said Stanton. “We’ve gone away from it, and now to go back to it, I think there’s this tremendous sense of belonging to this community in an old school way.” * For more news from USS Essex, follow us on Facebook at https://www.facebook.com/USSESSEX, or visit https://www.surfpac.navy.mil/lhd2.

Surface Warfare Magazine is the professional magazine of the surface warfare community. Its purpose is to educate its readers on surface warfare missions and programs, with a particular focus on U.S. surface ships and commands. This journal will also draw upon the Surface Force’s rich historical legacy to instill a sense of pride and professionalism among community members and to enhance reader awareness of the increasing relevance of surface warfare for our nation’s defense. 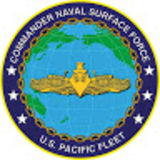