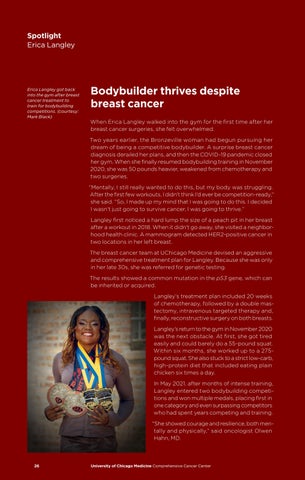 Erica Langley got back into the gym after breast cancer treatment to train for bodybuilding competitions. (courtesy: Mark Black)

Bodybuilder thrives despite breast cancer When Erica Langley walked into the gym for the first time after her breast cancer surgeries, she felt overwhelmed. Two years earlier, the Bronzeville woman had begun pursuing her dream of being a competitive bodybuilder. A surprise breast cancer diagnosis derailed her plans, and then the COVID-19 pandemic closed her gym. When she finally resumed bodybuilding training in November 2020, she was 50 pounds heavier, weakened from chemotherapy and two surgeries. “Mentally, I still really wanted to do this, but my body was struggling. After the first few workouts, I didn’t think I’d ever be competition-ready,” she said. “So, I made up my mind that I was going to do this. I decided I wasn’t just going to survive cancer, I was going to thrive.” Langley first noticed a hard lump the size of a peach pit in her breast after a workout in 2018. When it didn’t go away, she visited a neighborhood health clinic. A mammogram detected HER2-positive cancer in two locations in her left breast. The breast cancer team at UChicago Medicine devised an aggressive and comprehensive treatment plan for Langley. Because she was only in her late 30s, she was referred for genetic testing. The results showed a common mutation in the p53 gene, which can be inherited or acquired. Langley’s treatment plan included 20 weeks of chemotherapy, followed by a double mastectomy, intravenous targeted therapy and, finally, reconstructive surgery on both breasts. Langley’s return to the gym in November 2020 was the next obstacle. At first, she got tired easily and could barely do a 55-pound squat. Within six months, she worked up to a 275pound squat. She also stuck to a strict low-carb, high-protein diet that included eating plain chicken six times a day. In May 2021, after months of intense training, Langley entered two bodybuilding competitions and won multiple medals, placing first in one category and even surpassing competitors who had spent years competing and training. “She showed courage and resilience, both mentally and physically,” said oncologist Olwen Hahn, MD.