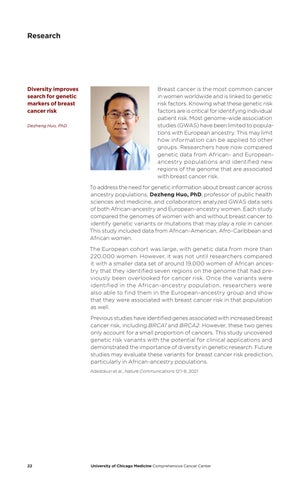 Breast cancer is the most common cancer in women worldwide and is linked to genetic risk factors. Knowing what these genetic risk factors are is critical for identifying individual patient risk. Most genome-wide association studies (GWAS) have been limited to populations with European ancestry. This may limit how information can be applied to other groups. Researchers have now compared genetic data from African- and Europeanancestry populations and identified new regions of the genome that are associated with breast cancer risk. To address the need for genetic information about breast cancer across ancestry populations, Dezheng Huo, PhD, professor of public health sciences and medicine, and collaborators analyzed GWAS data sets of both African-ancestry and European-ancestry women. Each study compared the genomes of women with and without breast cancer to identify genetic variants or mutations that may play a role in cancer. This study included data from African-American, Afro-Caribbean and African women. The European cohort was large, with genetic data from more than 220,000 women. However, it was not until researchers compared it with a smaller data set of around 19,000 women of African ancestry that they identified seven regions on the genome that had previously been overlooked for cancer risk. Once the variants were identified in the African-ancestry population, researchers were also able to find them in the European-ancestry group and show that they were associated with breast cancer risk in that population as well. Previous studies have identified genes associated with increased breast cancer risk, including BRCA1 and BRCA2. However, these two genes only account for a small proportion of cancers. This study uncovered genetic risk variants with the potential for clinical applications and demonstrated the importance of diversity in genetic research. Future studies may evaluate these variants for breast cancer risk prediction, particularly in African-ancestry populations. Adedokun et al., Nature Communications 12:1-8, 2021