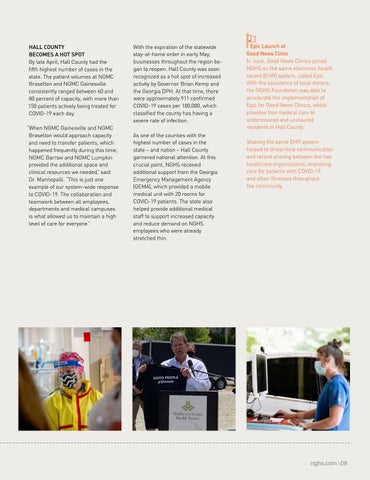 HALL COUNTY BECOMES A HOT SPOT By late April, Hall County had the fifth highest number of cases in the state. The patient volumes at NGMC Braselton and NGMC Gainesville consistently ranged between 60 and 80 percent of capacity, with more than 150 patients actively being treated for COVID-19 each day. “When NGMC Gainesville and NGMC Braselton would approach capacity and need to transfer patients, which happened frequently during this time, NGMC Barrow and NGMC Lumpkin provided the additional space and clinical resources we needed,” said Dr. Mannepalli. “This is just one example of our system-wide response to COVID-19. The collaboration and teamwork between all employees, departments and medical campuses is what allowed us to maintain a high level of care for everyone.”

With the expiration of the statewide stay-at-home order in early May, businesses throughout the region began to reopen. Hall County was soon recognized as a hot spot of increased activity by Governor Brian Kemp and the Georgia DPH. At that time, there were approximately 911 confirmed COVID-19 cases per 100,000, which classified the county has having a severe rate of infection. As one of the counties with the highest number of cases in the state – and nation – Hall County garnered national attention. At this crucial point, NGHS received additional support from the Georgia Emergency Management Agency (GEMA), which provided a mobile medical unit with 20 rooms for COVID-19 patients. The state also helped provide additional medical staff to support increased capacity and reduce demand on NGHS employees who were already stretched thin.

Epic Launch at Good News Clinic In June, Good News Clinics joined NGHS on the same electronic health record (EHR) system, called Epic. With the assistance of local donors, the NGHS Foundation was able to accelerate the implementation of Epic for Good News Clinics, which provides free medical care to underinsured and uninsured residents in Hall County. Sharing the same EHR system helped to streamline communication and record sharing between the two healthcare organizations, improving care for patients with COVID-19 and other illnesses throughout the community.

Communicare is a health education magazine published by the Public Relations department for the community to support the organization’s mission of: “Improving the health of our community in all we do.” 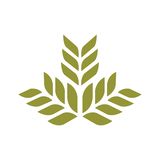