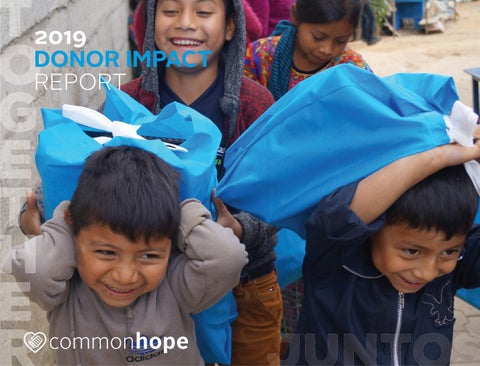 The impact of your giving changes the future for thousands of Guatemalan children and their families each year, and we are incredibly grateful for your continued investment in Common Hopeâ&#x20AC;&#x2122;s life-changing work. Together, it takes all of usâ&#x20AC;&#x201D;parents sacrificing to make school a priority, students learning and growing, staff and volunteers delivering our programs every day, and the generosity of spirit and financial support from our donors, sponsors, partners and vision team members to end the generational cycle of poverty. This year another 157 students graduated high school, totaling nearly 2,500 graduates since our first in 1996. Together, we are building a stronger Guatemala, one family at a time.

Together, we are building a stronger Guatemala, one family at a time. As always, we strive to continuously improve our programs and to use our resources wisely through our holistic approach to partnering with children and families. Common Hope ended the year on strong financial footing in 2019. Operating revenues grew year over year, and expenses continue to be well managed to ensure our resources are being stewarded in a way that produces quality programming and sound operations. In 2019 our highlights included the ability to provide homes to 80 families through our traditional fibrolit structures and block homes through our partnership with Constru Casa, allowing us to more than double the number of families impacted this year. We also invested in training for the social work team and working a new referral system that helps families prioritize which programs will be the most important for them and for their children. Finally, we launched the New Hope task force to best define the opportunities for growth in the region

and assessed and affirmed the need for Common Hope in the Antigua Valley in preparation for planned growth there as well in the coming years. Common Hope is weathering the Covid-19 pandemic, as the work we have done to build reserves can offset reductions in revenue resulting from the inability to host Vision Teams and the economic effects facing our donors. We have implemented strategies in 2020 to ensure the impact is minimized, and the good work done over the past decade to strengthen our financial health ensures we honor our commitments to the families we serve. We will continue to monitor not only the health and wellness of those we serve, but also the ongoing financial health of the organization. Your gifts impacted nearly 4,000 students through our family partnerships and school programs in 2019, and served approximately 14,000 moms, dads, and children living in 27 villages in the Central Highlands of Guatemala. We are incredibly grateful for your continued investment in the children, families and communities we serve. Together our impact is growing. With gratitude,

*Non-Operating Activity reflects changes in the value of investment gain/(losses). **In 2018, Common Hope budgeted and planned for the recognized operating net loss.

Common Hope is a 501(c)(3) not-for-profit corporation founded in 1986 and is audited annually. Our complete financial statements, audited by Boulay, are available on our website at www.commonhope.org/our-impact.

YOU make it possible for students to reach for the stars.

Together, our impact is growing.

WE MADE EDUCATION A PRIORITY. OPPORTUNITY & ACCESS CHANGE EVERYTHING Your support not only makes it possible for students to attend school—beyond the classroom it provides resources like homework centers, libraries, and computer labs. You make it possible for Common Hope to offer tutoring, youth support programs, and other critical educational support programs that give students what they need to be successful in school and in life.

CELEBRATING ESTUDIANTES ESTRELLAS In 2019, Common Hope’s Scholarship department hosted the inaugural Star Student Ceremony, a celebration to honor students who achieved and maintained top marks (at least 80%) in all of their classes. “Despite the barriers they face, these students are overcoming the odds,” said Nineth Garcia, Scholarship Manager.

NUMBER OF GRADUATES IN 2019

146 teachers in 11 schools “We continue to prove to be a safe environment for youth and their parents. Our space and programs create stability, support resilience, build values, foster confidence, and empower for their futures.” -Rebecca Sanborn, Country Director

TOTAL ATTENDANCE AT YOUTH ACTIVITIES IN 2019

WE made safe homes, quality hea NUMBER OF VOLUNTEERS IN 2019

NUMBER OF DENTAL EXAMS AND TREATMENTS

alth care, and family a priority.

on Hope, in partnership with Constru Casa, has been able to build iguel Milpas Altas. It was a huge milestone celebration for the the families and community.” - Josué Sican, Operations Director

NUMBER OF LETTERS DELIVERED TO STUDENTS AND SPONSORS

Together, we built community.

FAITH COMMUNITY PARTNERS Serve. Learn. Grow. Faith partners serve, learn, and grow as a community through shared experiences that allow them to give back through mission-focused work.

Together, SPONSORS HELPED PAVE THE WAY.

CELEBRATING SPONSORS’ DEDICATION Common Hope celebrates the dedication of all sponsors. The organization recognizes the anniversary of those who have sponsored for 30 years, 25 years, 20 years, and 10 years. 30 YEAR SPONSORS TREINTA AÑOS

Together, we navigate forward.

We’re finding creative solutions for delivering our mission during this crisis. Though the purpose of this report is to provide an update on 2019 financial health, program results, and impact, it is important to acknowledge and share how progress and impact will look different in 2020 in the midst of the global COVID-19 pandemic. The way Common Hope delivers on its mission evolves daily and our staff is working hard to generate innovative and creative solutions for supporting students and families in the face of so much uncertainty.

KEEPING EDUCATION ACCESSIBLE AND IMPORTANT Schools in Guatemala are closed for the foreseeable future—and the quality and accessibility of distance learning is low. Common Hope needs to keep education a priority for children and parents so the education team has created new ways for students to engage in learning. The SPARKS or Chispudos program ensures that kids continue to build skills in math and reading and keep learning at the forefront. The education team also operates a daytime & evening homework hotline to help students when they need it while the library, computer lab, and homework center remain closed.

PROVIDING COMPREHENSIVE QUALITY HEALTH CARE Continuing a holistic approach to providing quality health care to families remains a high priority. This includes physical, emotional, and mental health. Clinic staff continue to lead the development and implementation of safety protocols for those delivering these services while also monitoring new tele-medicine resources. During lockdown, tele-health is critical. Common Hope has dedicated resources to support not only physical health, but to also address anxiety, stress, and emotional health during these unprecedented times.

STAYING CONNECTED WITH FAMILIES AND THEIR NEEDS Now more than ever, it is critical for Common Hope families to be connected; to health resources, to education resources, to friends and family. Common Hope’s social workers need to be able to maintain contact with families in order to understand their needs. Common Hope has invested resources to provide cell phones, data plans, and other technology to frontline staff. Although telephone calls and text messaging has replaced in person visits, Common Hope’s connection with families is stronger and more frequent than ever before.

ENSURING BASIC NEEDS ARE MET INCLUDING FOOD SECURITY Food and basic neccesities are available in Guatemala but decreased income and travel restrictions have affected the ability of families to purchase what they need. Food insecurity is among the top concerns for families during this crisis, especially considering these families already lived at the poverty line prior to the pandemic. Common Hope will continue to provide food and other essentials to families for as long as needed to aid in the effort to prevent even greater food instability and hunger.

Tim Scanlan, Visionary Circle Member, pictured with members of Common Hopeâ&#x20AC;&#x2122;s Housing Team and students celebrating the inauguration of a new truck donated in part by the Scanlan Family that is helping build homes for families.

Together, we celebrate your impact.

Many thanks to Common Hope’s 2019 Esperanza Society Members! ¡Mil Gracias a todos!

The Common Hope Esperanza Society is designed to recognize leadership donors and their generosity.

Common Hope takes great care to ensure the accuracy of our donor records. If we have made an error in our lists, we sincerely apologize and ask that you contact us at 651-287-0719. ¡Gracias!

Together, we say, ¡Gracias!

Common Hopeâ&#x20AC;&#x2122;s mission is to promote hope and opportunity in Guatemala, partnering with children, families, and communities who want to participate in a process of development to improve their lives through education, health care, and housing. Charities Review Council 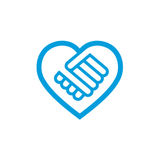 Common Hope is excited announce the 2019 Donor Impact Report is available online. In order to be good stewards of the dollar and reduce cost...

Common Hope is excited announce the 2019 Donor Impact Report is available online. In order to be good stewards of the dollar and reduce cost...