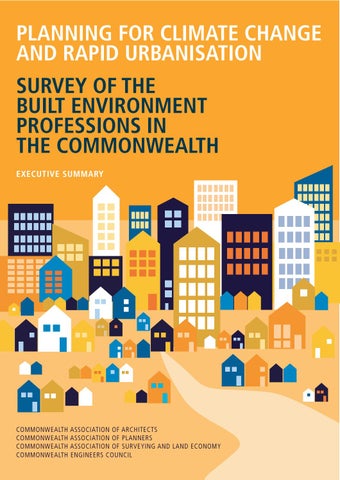 “ This important survey, the first of its kind, lays bare the simple fact that many of the countries that are urbanizing most rapidly have the least professional resource to plan for that growth, highlighting the urgent and critical need to build capacity and skills to deal with this issue.” HRH The Prince of Wales Climate change and rapid urbanisation are among the most serious challenges facing the Commonwealth; challenges which have now been compounded by the effects of the Coronavirus pandemic. UN Habitat estimates that 65% of the targets underlying the 17 Sustainable Development Goals are linked to territorial and urban development, and built environment professionals are central to the design of cities and human settlements that achieve the requirements of Goal 11 to be ‘inclusive, safe, resilient and sustainable’. How well equipped are the built environment professions to meet this challenge? This is the question which the four Commonwealth associations representing architects, engineers, town planners, and surveyors set out to answer in the Survey of the Built Environment Professions in the Commonwealth; the first such joint survey ever to have been undertaken.

The key findings of the survey reveal: ·

a need to build professional capacity: There is a critical lack of capacity in many of the Commonwealth countries which are urbanising most rapidly and are among the most vulnerable. The average ratio of architects per thousand head of population in Commonwealth countries which are members of the Organisation for Economic Co-operation and Development (OECD); Australia, Canada, New Zealand and the United Kingdom; is 0.455 whereas in Uganda it is 0.005, ie over 40,000 architects and 20,000 planners in the UK compared with just over 200 architects and 100 planners in Uganda.

a need to build educational capacity: There is a lack of educational and institutional capacity to grow the professions fast enough to make up the shortfall in many Commonwealth countries. In OECD countries, the average ratio of planning schools per million head of population is 0.729 whereas in Nigeria it is only 0.179, a fourfold difference, eg 28 planning schools in the UK compared with 5 in Pakistan, which is urbanising nearly 3 times faster than the UK and with over 3 times the population.

a need to strengthen built environment policy: There is increasing recognition of weakness in built environment policy in many Commonwealth countries in terms of standards, implementation, and enforcement. The combined responses reveal that circa 30% of respondents consider their national planning policy is not fit for purpose while nearly 60% do not believe it is being implemented effectively. Survey respondents were even more critical of building code, with nearly 50% expressing the view that it is not fit for purpose and almost 75% that it is not being implemented effectively.

Many of the countries which are urbanising most rapidly are among the most vulnerable to climate change impacts 94% of the population of the Commonwealth are in Africa and Asia, which is also home to over 95% of the 234 cities most affected by climate change and considered to be at ‘extreme risk’. Urban centres in Africa dominate in terms of population growth, with 86 of the 100 fastest growing cities. Significantly, 79 of these are rated ‘extreme risk’, including Kampala in Uganda, Dar-es-Salaam in Tanzania, and Lagos in Nigeria. Uganda’s urban population, for example, is projected to quadruple by 2050 while Nigeria’s is projected to more than double in the same period, adding almost 200m new urban dwellers. Most of this growth will be taking place in secondary cities.

But progress towards delivery of SDG11 is failing A study of the results of the 2019 Sustainable Development Report produced by the UN Sustainable Development Solutions Network (UNSDSN) concerning delivery of SDG 11 in 36 Commonwealth countries reveals that the targets associated with Goal 11 have only been achieved in 1 country and that: · Challenges remain in 10 countries · Significant challenges remain in 13 countries · Major challenges remain in 12 countries A comparison between the results of 2017 and 2019 report prepared by the UNSDSN reveals that progress towards delivery of SDG 11 is: · Unchanged in 23 countries · Improving in only 2 countries · Worsening in 10 countries Failure to achieve Goal 11 would have a profound impact on our ability to deliver the UN 2030 Agenda for Sustainable Development and our climate change commitments, with corresponding impacts on prosperity and resilience, leading to greatly increased inequality and vulnerability.

The Commonwealth is uniquely well placed to tackle these issues It is recognised that an effective response to the findings of the survey will require a multi-disciplinary, multisector effort and that, by leveraging its shared values and its network, the Commonweath has a unique opportunity to engage with these issues. This is why the Commonwealth Association of Architects and the Commonwealth Association of Planners are working together with the Association of Commonwealth Universities, the Commonwealth Local Government Forum and The Prince’s Foundation to develop a Call to Action on sustainable urbanisation in the Commonwealth. Working closely in collaboration with the Rwandan Ministry of Infrastructure, the group also attended the Tenth World Urban Forum, which was hosted by UN Habitat and held in Abu Dhabi in February 2020, at which it committed to the development of an inter-disciplinary, cross-sector collaboration working to advance sustainable urbanisation in the Commonwealth. The launch of the Survey of the Built Environment Professions in the Commonwealth will coincide with a programme of online events aimed at engaging a wide stakeholder group to help develop and built momentum around a Call to Action, itself the prelude to a programme of activity aimed at engaging with the findings.

Survey of the Built Environment Professions in the Commonwealth

AND THE COMMONWEALTH Half of the top 20 global emerging cities are in the Commonwealth: New Delhi, Mumbai, Nairobi, Kuala Lumpur, Bangalore, Johannesburg, Kolkata, Cape Town, Chennai and Dhaka. According to the Economist Intelligence Uniti, the Commonwealth includes 6 of the 10 Most Liveable Cities in the World and 5 of the 10 Least Liveable Cities in the World.

The Top 20 most polluting Commonwealth countries comprise circa 250m people and currently produce circa 2.3bn tonnes C02 per annum.

The remaining 34 Commonwealth countries, many of which are rapidly urbanising, comprise circa 2.3bn people and currently produce circa 2.7bn tonnes C02 per annum.

Uganda (pop. 42m) is rapidly urbanising at 6.2% per annum, has 221 architects and 98 graduate town planners

SMALL STATES 32 Commonwealth countries are Small States, 25 of which are Small Island Developing States (SIDS). In the Caribbean, over 50% of the population lives within 1.5km of the sea, rendering them particularly vulnerable to storm surges and rising sea levels.iii

BILLION SQM The OECD forecasts that nearly 90 billion sqm of additional floor area will be constructed in Africa by 2050.

of the population of the Commonwealth live in Africa and Asia

MOZAMBIQUE Mozambique (pop. 29m) is rapidly urbanising at 4.4% per annum, has 2,320 registered engineers but no professional association/institute for architects or town planners.

Survey of the Built Environment Professions in the Commonwealth 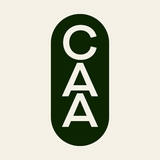 Survey of the Built Environment Professions in the Commonwealth, Executive Summary

Climate change and rapid urbanisation are among the most serious challenges facing the Commonwealth; challenges which have now been compound...

Survey of the Built Environment Professions in the Commonwealth, Executive Summary

Climate change and rapid urbanisation are among the most serious challenges facing the Commonwealth; challenges which have now been compound...