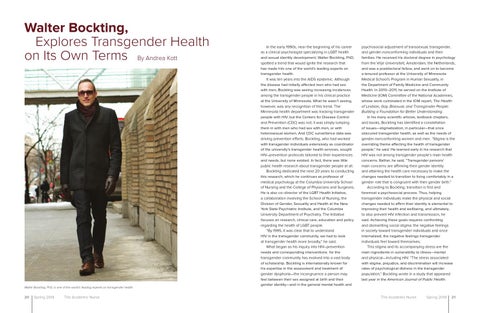 Walter Bockting, Explores Transgender Health on Its Own Terms By Andrea Kott

Walter Bockting, PhD, is one of the world’s leading experts on transgender health

In the early 1990s, near the beginning of his career as a clinical psychologist specializing in LGBT health and sexual identity development, Walter Bockting, PhD, spotted a trend that would ignite the research that has made him one of the world’s leading experts on transgender health. It was ten years into the AIDS epidemic. Although the disease had initially affected men who had sex with men, Bockting was seeing increasing incidences among the transgender people in his clinical practice at the University of Minnesota. What he wasn’t seeing, however, was any recognition of this trend. The Minnesota health department was tracking transgender people with HIV, but the Centers for Disease Control and Prevention (CDC) was not; it was simply lumping them in with men who had sex with men, or with heterosexual women. And CDC surveillance data was driving prevention efforts. Bockting, who had worked with transgender individuals extensively as coordinator of the university’s transgender health services, sought HIV–prevention protocols tailored to their experiences and needs, but none existed. In fact, there was little public health research about transgender people at all. Bockting dedicated the next 20 years to conducting this research, which he continues as professor of medical psychology at the Columbia University School of Nursing and the College of Physicians and Surgeons. He is also co–director of the LGBT Health Initiative, a collaboration involving the School of Nursing, the Division of Gender, Sexuality and Health at the New York State Psychiatric Institute, and the Columbia University Department of Psychiatry. The Initiative focuses on research, clinical care, education and policy regarding the health of LGBT people. “By 1995, it was clear that to understand HIV in the transgender community, we had to look at transgender health more broadly,” he said. What began as his inquiry into HIV–prevention needs and corresponding interventions for the transgender community has evolved into a vast body of scholarship. Bockting is internationally known for his expertise in the assessment and treatment of gender dysphoria—the incongruence a person may feel between their sex assigned at birth and their gender identity—and in the general mental health and

psychosocial adjustment of transsexual, transgender, and gender-nonconforming individuals and their families. He received his doctoral degree in psychology from the Vrije Universiteit, Amsterdam, the Netherlands, and was a postdoctoral fellow, and went on to become a tenured professor at the University of Minnesota Medical School’s Program in Human Sexuality, in the Department of Family Medicine and Community Health. In 2010–2011, he served on the Institute of Medicine (IOM) Committee of the National Academies, whose work culminated in the IOM report, The Health of Lesbian, Gay, Bisexual, and Transgender People: Building a Foundation for Better Understanding. In his many scientific articles, textbook chapters, and books, Bockting has identified a constellation of issues—stigmatization, in particular—that once obscured transgender health, as well as the needs of gender-nonconforming women and men. “Stigma is the overriding theme affecting the health of transgender people,” he said. He learned early in his research that HIV was not among transgender people’s main health concerns. Rather, he said, “Transgender persons’ main concerns are affirming their gender identity and attaining the health care necessary to make the changes needed to transition to living comfortably in a gender role that is congruent with their gender birth.” According to Bockting, transition is first and foremost a psychosocial process. Thus, helping transgender individuals make the physical and social changes needed to affirm their identity is elemental to improving their health and wellbeing, and ultimately, to also prevent HIV infection and transmission, he said. Achieving these goals requires confronting and dismantling social stigma: the negative feelings in society toward transgender individuals and once internalized, the negative feelings transgender individuals feel toward themselves. This stigma and its accompanying stress are the main ingredients in vulnerability to illness—mental and physical—including HIV. “The stress associated with stigma, prejudice, and discrimination will increase rates of psychological distress in the transgender population,” Bockting wrote in a study that appeared last year in the American Journal of Public Health. The Academic Nurse 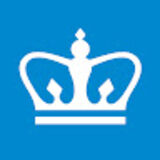 The Spring 2014 issue of The Academic Nurse, the magazine published by Columbia University School of Nursing

The Spring 2014 issue of The Academic Nurse, the magazine published by Columbia University School of Nursing