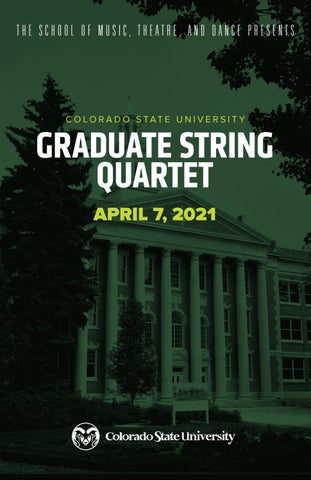 THE SCHOOL OF MUSIC, THEATRE, AND DANCE PRESENTS

PROGRAM NOTES DOHNÁNYI (1877-1960) wrote the Serenade in C major, Op.10, for String Trio in 1902, which was published in Vienna two years later. The first movement of the Serenade is a March, dominated by the bold rhythmic figure that it opens with. The music takes a turn into a more lyrical character, hinting at Hungarian folk music before concluding with a distant restatement of the opening motif. The Romanza begins with accompanying pizzicato offbeat chords in the cello and violin as the viola sings the first theme. The viola then goes on to provide an arpeggiated accompaniment to the more explosive middle section of the movement, before the violin takes the listener back to the principal melody. In the Scherzo, the instruments enter in succession with each other with a highly chromatic, lively theme. The perpetual activity of the third movement is briefly relaxed by a more lyrical secondary theme. The fourth movement is made up of a theme and variations. The violin states the theme, which is then passed onto the viola as the violin and cello accompany it. The violin elaborates with a melodic variation, which leads to a descending melodic pattern as the cello soars above the other instruments. Triplet rhythms take over in the Poco più animato, ramping up excitement until the tranquility of the next section. Finally, the energetic Rondo concludes the Serenade, which is driven forward by the brisk, playful main theme. The movement ends with a restatement of melodic materials that occurred in previous movements. This work, composed in 1842, fully encaptures the two characters which SCHUMANN liked to incorporate into his music. It is commonly understood that Schumann composed with these two contrasting characters, one introverted and the other extroverted. The work begins with the strings, setting the tone with slow, rich chords. The mood in this opening is the perfect example of Schumann’s introverted character, Eusebius. The mood seems serene and calm, exemplifying the dreaminess that Keller mentions regarding this character. This mood doesn’t last long before the character changes to the “fiery” Allegro ma non troppo exemplifying Florestan in the thirteenth measure. The first movement battles these two characters as the Sostenuto assai returns, interrupting the extroverted theme. The Scherzo second movement has an intense character and in the key of G minor. Keller’s comment about reducing Schumann’s expression to two characters strikes true in this movement. While the tempo flies, it seems inappropriate to limit the mysterious mood of the melody by characterizing it as the “fiery Florestan.”

There seems to be so much more expression behind Schumann’s music.The third movement of this work captures the pure essence of a dreamy, melancholic character. This melody is often considered one of the most beautiful and expressive lines that Schumann had ever composed. The second material, while in the rather unholy key of G-Flat Major, brings a character of reverence and peace before returning to the sorrowful theme. While the other movements in this work seem to exemplify both of Schumann’s two contrasting characters, this movement retains the calm, meditative mood throughout the movement. The fourth movement contains thick contrapuntal material. Schumann spent a lot of his time analyzing Bach fugues and this movement is a beautiful mix of old and new. While the movement has some triumphant and Romantic elements, some tributes to a more Baroque style can be found throughout the movement. Dmitri Ascarrunz picked up the violin for the first time at age seven after falling in love with the sound of an orchestra. While completing his BM in Violin Performance at CSU, he competed in the finals of the CSU Concerto Competition and performed with the CSU Symphony as a soloist. Since then, Dmitri has attended the Young Artists Music Program at Rocky Ridge and has also performed in Orvieto Musica, an intensive Chamber Music Festival held in Italy. He has studied with Takanori Sugishita, Ron Francois, Erik Peterson, and Zo Manfredi. Dmitri became a member of the CSU Graduate String Quartet during the final semester of his undergraduate degree. He is currently pursuing a M.M. in Violin Performance at CSU and is the current Concert Master of the CSU Symphony Orchestra. Carly Dekker is a second-year graduate student studying Viola Performance at Colorado State University. Carly graduated from Azusa Pacific University in 2019 with a B.M in Viola Performance, where she had the opportunity to study under some incredibly influential figures in both the classical music setting, such as members of the Los Angeles Philharmonic, as well as members of the film music industry. Carly has had the privilege of studying viola privately under the instruction of Basil Vendryes, Jonathan Moerschel, Gina Coletti, and Margaret Miller, Carly has over 10 years of experience teaching violin, viola and piano. She is currently building her private studio in both Fort Collins and the Denver metro area and hopes to focus her time on teaching once she graduates in May. Originally from Louisville, Kentucky, Faith Rohde currently lives in Fort Collins, CO where she is receiving her M.M in cello performance at Colorado State University. With 12+ years of playing the cello, she is looking forward to what the music industry holds for her and how she can shape the 21st-century orchestra. Faith has studied cello with Robbin Chappars, Paul York, Anthony Kaiti, Jason Calloway, Natasha Farny, Dennis Parker, Regina Mushabac, and is currently being taught by Barbara Thiem. Faith has enjoyed four summers with the Sewanee Summer Music Festival working with world-renowned conductors in a semi-professional orchestra. Faith has taught for the Kentucky Christian Strings Camp located in Louisville, KY as well as a cello sectional coach for the Community Music School hosted by Baldwin Wallace Conservatory of Music. Faith has been in masterclasses coached by Ralph Curry from the Cleveland Orchestra, David Louwerson from Ensemble Variance, Bryan Dumm from the Cleveland Orchestra, Martha Baldwin from the Cleveland Orchestra, and Jason Calloway from the Amernet String Quartet. Ty Huey is a first-year graduate student from Monument, Colorado pursuing his M.M. in Piano Performance at Colorado State University. Ty has studied piano since the age of three with Cathy Vitro, Michael Baron, Dale Backus, Dr. Janet Landreth, and, currently, with Dr. Bryan Wallick at CSU. Ty has also had the privilege to perform in masterclasses with renowned pianists like Kemal Gekic, Sophia Hase, Eduardo Ponce and Vadym Kholodenko. As a competitor, Ty has competed in several piano competitions ranging from the local to international level. Ty won the bronze medal at the 2017 International Keyboard Odyssiad Competition and Festival and most recently won the 2019-2020 CSU Concerto Competition playing Rachmaninoff’s Second Piano Concerto with the CSU Symphony Orchestra.

State of Generosity Your gift to the School of Music, Theatre, and Dance provides crucial scholarship support, enables the evolution of our programs and performances, and gives our students the opportunity to obtain their education in the one of the region’s most distinctive facilities for arts students. 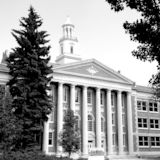 Since its inception in 2008, the graduate quartet program at CSU has brought together musicians from around the country and Mexico for an in...

Since its inception in 2008, the graduate quartet program at CSU has brought together musicians from around the country and Mexico for an in...