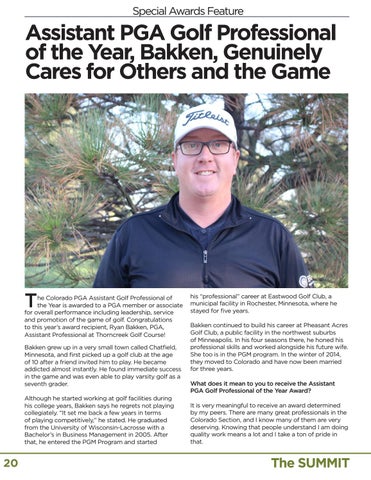 Assistant PGA Golf Professional of the Year, Bakken, Genuinely Cares for Others and the Game

he Colorado PGA Assistant Golf Professional of the Year is awarded to a PGA member or associate for overall performance including leadership, service and promotion of the game of golf. Congratulations to this year’s award recipient, Ryan Bakken, PGA, Assistant Professional at Thorncreek Golf Course! Bakken grew up in a very small town called Chatfield, Minnesota, and first picked up a golf club at the age of 10 after a friend invited him to play. He became addicted almost instantly. He found immediate success in the game and was even able to play varsity golf as a seventh grader. Although he started working at golf facilities during his college years, Bakken says he regrets not playing collegiately. “It set me back a few years in terms of playing competitively,” he stated. He graduated from the University of Wisconsin-Lacrosse with a Bachelor’s in Business Management in 2005. After that, he entered the PGM Program and started

his “professional” career at Eastwood Golf Club, a municipal facility in Rochester, Minnesota, where he stayed for five years. Bakken continued to build his career at Pheasant Acres Golf Club, a public facility in the northwest suburbs of Minneapolis. In his four seasons there, he honed his professional skills and worked alongside his future wife. She too is in the PGM program. In the winter of 2014, they moved to Colorado and have now been married for three years. What does it mean to you to receive the Assistant PGA Golf Professional of the Year Award? It is very meaningful to receive an award determined by my peers. There are many great professionals in the Colorado Section, and I know many of them are very deserving. Knowing that people understand I am doing quality work means a lot and I take a ton of pride in that.

In this issue of The SUMMIT, we are excited to share about the newest member of the Colorado Golf Hall of Fame, PGA Master Professional Ed O...

In this issue of The SUMMIT, we are excited to share about the newest member of the Colorado Golf Hall of Fame, PGA Master Professional Ed O...