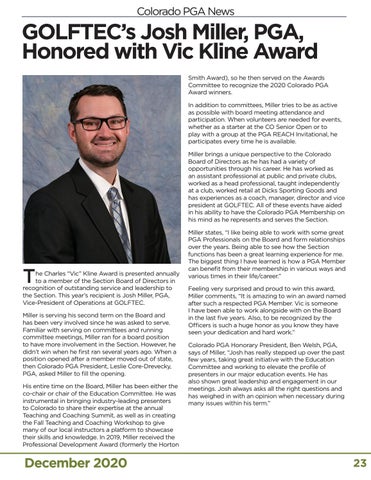 GOLFTEC’s Josh Miller, PGA, Honored with Vic Kline Award Smith Award), so he then served on the Awards Committee to recognize the 2020 Colorado PGA Award winners. In addition to committees, Miller tries to be as active as possible with board meeting attendance and participation. When volunteers are needed for events, whether as a starter at the CO Senior Open or to play with a group at the PGA REACH Invitational, he participates every time he is available. Miller brings a unique perspective to the Colorado Board of Directors as he has had a variety of opportunities through his career. He has worked as an assistant professional at public and private clubs, worked as a head professional, taught independently at a club, worked retail at Dicks Sporting Goods and has experiences as a coach, manager, director and vice president at GOLFTEC. All of these events have aided in his ability to have the Colorado PGA Membership on his mind as he represents and serves the Section.

he Charles “Vic” Kline Award is presented annually to a member of the Section Board of Directors in recognition of outstanding service and leadership to the Section. This year’s recipient is Josh Miller, PGA, Vice-President of Operations at GOLFTEC. Miller is serving his second term on the Board and has been very involved since he was asked to serve. Familiar with serving on committees and running committee meetings, Miller ran for a board position to have more involvement in the Section. However, he didn’t win when he first ran several years ago. When a position opened after a member moved out of state, then Colorado PGA President, Leslie Core-Drevecky, PGA, asked Miller to fill the opening. His entire time on the Board, Miller has been either the co-chair or chair of the Education Committee. He was instrumental in bringing industry-leading presenters to Colorado to share their expertise at the annual Teaching and Coaching Summit, as well as in creating the Fall Teaching and Coaching Workshop to give many of our local instructors a platform to showcase their skills and knowledge. In 2019, Miller received the Professional Development Award (formerly the Horton

Miller states, “I like being able to work with some great PGA Professionals on the Board and form relationships over the years. Being able to see how the Section functions has been a great learning experience for me. The biggest thing I have learned is how a PGA Member can benefit from their membership in various ways and various times in their life/career.” Feeling very surprised and proud to win this award, Miller comments, “It is amazing to win an award named after such a respected PGA Member. Vic is someone I have been able to work alongside with on the Board in the last five years. Also, to be recognized by the Officers is such a huge honor as you know they have seen your dedication and hard work.” Colorado PGA Honorary President, Ben Welsh, PGA, says of Miller, “Josh has really stepped up over the past few years, taking great initiative with the Education Committee and working to elevate the profile of presenters in our major education events. He has also shown great leadership and engagement in our meetings. Josh always asks all the right questions and has weighed in with an opinion when necessary during many issues within his term.”