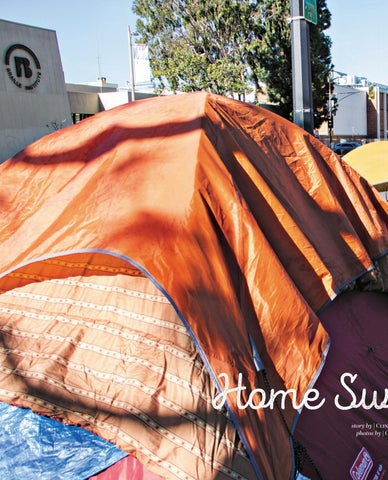 Among bicycles, stuffed animals, laptop computers, radios, books and piles of clothing, a large pink and red cloth umbrella towered over two tents. The people that lived on the 700 block of Vermont Avenue owned these items. Their belongings overflowed from shopping carts and spilled onto the sidewalk.

ASMINE ROSS – pronounced rose – sat on a lawn chair underneath the umbrella with her legs crossed. Her towering presence could have been attributed to her height or attitude. On a windy afternoon in March, she put all activity with surrounding residents on hold. “I’m a star,” Ross said as she posed for pictures and answered interview questions. “I’m shining right now.” Ross lived as a man prior to becoming homeless a year ago. She refers to her transition as her “graduation,” and uses the exact date, “3-17-15” to refer to it like an anniversary. In the west-central San Fernando Valley neighborhood of Winnetka, she began to refer to herself as Jasmine and other times as Nikoveli. When she lived with her mother, she was Nick. “The name I was born with is Willis Demetrius Traves the Fifth,” Ross said. “[But they called me Nick] because I’m the fifth.” When the subject of her family came up, she appeared apprehensive and fell silent as she contemplated seeing her three brothers and two sisters. She had not seen any of her siblings in more than a year. That was before she began cross-dressing full time.

booty shorts and her man, well I’ll say my new stepdaddy, I guess he was oﬀended.” From her mother’s home to the streets, Ross became homeless immediately. She started living on the streets of Winnetka where she engaged in low-level drug dealing. More than 15 years prior, she joined the South Central Los Angeles gang Harlem 30s Crips where she went by the name “Li’l Indo.” In Winnetka, she continued identifying openly as a member of the Harlem 30s strictly for street credibility and protection. Her female persona however, remained hidden. “I would have never walked outside like this,” Ross said as she gestured to her outfit: a short, white cotton dress with a floral lace pattern. Eventually, gang hostility forced her to leave the area. She said the local gangs accused her of infringing on their territory. “I stumbled in some shit that obviously I didn’t even know what was going on,” Ross said. “‘Cause I know that people wanted to tax me for selling drugs. You know what I mean?” To avoid possible consequences, Ross headed south to Hollywood. TENT CITY BLUES Ross’ choice of words to describe her experience in Hollywood masks the reality of being homeless. She had “roommates,” a “place” and “stayed” at locations without ever having a permanent address or a roof over her head. After Ross arrived in Hollywood, she lived

with “Texas” on Santa Monica Boulevard. Shortly after she moved in with him, Los Angeles County Sheriﬀs forced them to leave. Her next move to Vermont and Melrose Avenues resulted in another visit by the sheriﬀs. Again, they forced her and her roommate out. Eventually, she found “Chris” and joined him on Vermont Avenue, between Monroe and Marathon Streets. “Before I came [to Vermont], there was already like five tents,” Ross said. “There was really no agreement. It was just like people come and people go. That’s just how it was.” Once the encampment grew in size, complaints by local community members and businesses elicited a response from the city. In late October 2015, a notice posted by the Los Angeles Sanitation Department warned those living on the Vermont Avenue sidewalk to remove their belongings for a

street cleanup. It was one of four signs placed strategically around City College’s Parking Lot 1 on the east side of Vermont Avenue. Sanitation workers wore gloves and face masks as they began work at 9 a.m. on Oct. 25, 2015. They made their way up the sidewalk through the encampment from Monroe to Marathon Streets and discarded trash and unattended personal belongings. Larger items like couches required two or more workers. They loaded items into bins that were then picked up by city dump trucks. Police officers cordoned oﬀ the area with yellow police tape as the city employees stayed busy clearing the area. HOPE FOR THE HOMELESS Los Angeles Police Department officers Matthew Zeigler and Victor Gutierrez visited the Ver-

mont dwellings during the street cleanup. They oﬀered assistance to anyone needing housing. Unique, an African-American transgender woman seemed receptive to their help. “Unique, what if we got you an apartment?” Zeigler asked as Gutierrez took down the police tape. “If you get me an apartment, not only will I be extremely grateful, I will also pay my bills and do what I need to do,” Unique said. Zeigler promised to visit the same location within the week to speak with Unique and other homeless individuals interested in finding housing. When Unique spoke with representatives from the Los Angeles Homeless Services Authority (LAHSA) that week, she declined their oﬀer for housing when it excluded her partner. She said she decided to remain homeless, rather than accept LAHSA’s offer and live away from her partner.

“Before I came [to Vermont], there was already like five tents. There was really no agreement. It was just like people come and people go. That’s just how it was.” - Jasmine Ross Ross had a similar conversation with Zeigler. However, she remained unclear concerning specifics regarding a permanent housing situation. Still, she said she was open to looking into housing assistance programs. She claimed a housing program would provide incentive to look for a permanent home. She anticipated that participation in a program would in-

crease her chances to qualify for Section 8 vouchers and lead to an aﬀordable place to live in Los Angeles County. “I am thinking about looking into it just because I wanna just do a program,” Ross said. “However, I need to do it to get me some Section 8. I needs me some Section 8 and I’ll be great. [Then, I will] have me a place.”

Ross remained on the streets long enough to see a March 23, 2016 cleanup displace her and the entire tent city community. “I was given 72 hours to move my shit or they would move it [themselves,]” Ross said. “In the midst of all that, I lost my tent. I lost food, [a] stove, a portable heater, laptops – well one laptop, iPhone, iPod Touch, Blackberry tablet and some other things, and I watched that shit get thrown in the garbage.” STREET EVICTION Without government assistance, Ross remained on the streets. She moved behind the Yoshinoya restaurant on the corner of Melrose and Vermont Avenues. Restaurant employees became familiar with her as a regular customer and so did property management. Ideal Management – the property management company in charge of the mini-mall where Yoshinoya is located – threatened to call the

“I was given 72 hours to move my shit or they would move it [themselves]. In the midst of all that, I lost my tent. I lost food, [a] stove, a portable heater, laptops – well one laptop, iPhone, iPod Touch, Blackberry Tablet and some other things, and I watched that shit get thrown in the garbage.” - Jasmine Ross police if Ross refused to leave. “I’m going to try not to see [property management] this week ‘cause I have two warrants – little misdemeanor warrants,” Ross said. “I’m not trying to see the police like that.” Ross disappeared from the corner of Melrose and Vermont Avenues less than a month after the March cleanup. Rumors among the local homeless

population suggest she may have been arrested. Most of Ross’ property disappeared, including five shopping carts full of electronics, three large tarps and several household appliances. All that remained was a large collection of colorful T-shirts, wigs, undershirts, panties and socks spread out over the black asphalt behind the minimall lot. ¶ 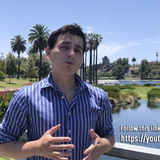