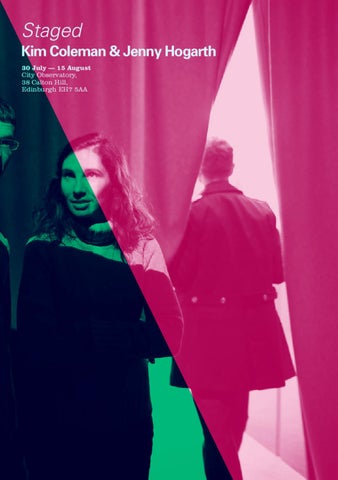 Kim Coleman &amp; Jenny Hogarth Produced by Collective, Staged is an off-site project by collaborating artists Kim Coleman and Jenny Hogarth. Edinburgh, especially during the Festival, is an iconic and theatrical city raising questions of what is real and what is fictional. People come to see performances and at the same time form part of a human drama. In Staged they become part of a production that navigates the real and fictional. Staged is a multi-channel video installation combining live video with pre-recorded footage. It functions as a digital camera obscura, transforming Edinburgh into a mise-en-scène and the visitors, tourists and locals into players. Installed in the City Observatory on Edinburgh’s Calton Hill, one of the many Playfairdesigned elements of 2

Edinburgh’s ‘backdrop’ and similar to experiments carried out in observatories of the past, Staged uses modern technology to alter the way we understand time and space in the city. The video footage in Staged acts as a kaleidoscope that obscures and abstracts wellknown vistas. The work goes someway to capturing the complex relationship the city has with performance, heightening the viewers’ awareness of the staging of the Edinburgh Festival. Kim Coleman &amp; Jenny Hogarth have been working collaboratively since 2003. Recent solo exhibitions and projects include Players, Frieze Projects, Frieze Art Fair, London (2009) Glare, S1 Artspace, Sheffield (2009)

Kim Coleman &amp; Jenny Hogarth with the Boyle Family, Nought to Sixty, ICA, London (2008) and Act Natural, Picture This, Bristol/ AMIE, Bath (2008). Open: Mon – Sunday 11am – 6pm Access via steps from Regent Rd. Disabled access from Royal Terrace. Access to upper car park via Regent Road can be arranged in special circumstances and must be agreed in advance with Collective. To discuss further, call Collective on 0131 220 1260.

The observatory was designed and built by William Henry Playfair, one of Edinburgh&#39;s most prominent 19th century architects. The style of the

exterior is based on the Temple of the Four Winds, Athens. It is one of the buildings that has earned Edinburgh the title the ‘Athens of the North’; epitomising the ideals of the Scottish Enlightenment. Calton Hill affords some of the best views of the city and its history of surveillance and intellectual endeavour make it an inspiring context for Staged.

Pale Blue Dots By Francis McKee The City Observatory, on the summit of Calton Hill in Edinburgh, soars above the city and sits beneath the heavens. It is a perfect location to survey the urban population and to scan the stars. With Staged, Kim Coleman and Jenny Hogarth bring those possibilities into conjunction, drawing on the long scientific history of the observatory while devising an installation that mixes live and pre-recorded footage from CCTV cameras around the city. The first observatory on the site was opened by Thomas Short in the 1770’s but that building was pulled down to construct the Royal Observatory, designed by William Playfair and completed in 1812. In 1827, however, Short’s daughter, Maria Theresa, returned to the city and opened what became the Camera Obscura on Castle Hill. These two competing optical towers provide elements that inform Staged. On one hill surveillance of the sky is used for scientific ends while on the other, surveillance of the population is presented as entertainment. Staged draws on both of these approaches but within the context of art. The template of the camera obscura evokes the very earliest histories of the moving image, long before pictures could be fixed on paper or film. Aristotle talks of ‘sunlight travelling through small openings between the leaves of a tree, the holes of a sieve, the openings wickerwork, and even interlaced fingers will create circular patches of light on the ground.’ In 11th century Basra, the scientist Ibn al-Haytham demonstrated the projection of an image from outside onto the wall of a room. The term ‘camera obscura’ was first used in 1604 by the astronomer

Johannes Kepler when he published his Astronomiae Pars Optica (The Optical Part of Astronomy). Kepler sought to define the laws of optics to enable his study of lunar and solar eclipses but neuroscientists also acknowledge that he was the first to recognize that images are projected inverted and reversed by the eye&#39;s lens onto the retina. While he did not attach particular importance to this observation, Kepler did note that the image was later corrected ‘in the hollows of the brain’ due to the ‘activity of the soul’. Such a point may appear trivial. At that time in history Kepler could not know enough of the workings of optical nerves to understand that the correction of the image was an objective process. However, his background also inclined him to find a moral mechanism for the righting of the inverted image. He had once hoped to become a protestant minister and in his science he attempted to reveal God’s geometrical plan of the universe. Implicating the soul in the formation of images in the brain brought a moral dimension to seeing – what we saw depended on our moral goodness and so, perhaps, our moral corruption could alter our vision. This may seem a long way from Coleman and Hogarth’s work but the tension set up by Kepler in the beginnings of optical exploration continue to resonate and Staged demonstrates how they permeate contemporary life. The laws of optics only ratified what was already a problem as far back as Plato – the question of reality and our ability to view it accurately.

The history of photography has vacillated between faithfulness and distrust from its inception. Fox Talbot, one of the early pioneers of the photographic image, famously advocated the new medium as more accurately representing nature than the sketchbook or watercolour. The optimism around the invention of photography spread to scientists, psychiatrists in particular, who hoped the camera’s speed would capture human phenomena that were too fast for the human eye. As the possibilities for manipulating the photographic image grew though, the photograph soon seemed perfectly designed to deceive and psychiatry became disillusioned as the camera failed to categorise accurately every aspect of the ambiguous human frame. Studio portraits further eroded confidence in a true image as sitters posed and contrived to create a favourable impression. Honesty returned in the guise of street photography – the candid snap, the decisive moment of CartierBresson, the casual observation of Robert Frank or William Eggleston. Soon though fashion and art began to colonise the street and again it became difficult to ‘capture’ reality. Coleman and Hogarth move knowingly into this contested terrain. Acknowledging the influence of Foucault’s discourse on the panopticon, the social history of the panorama and the more recent disquisitions on surveillance and control, they are not simply considering the social science of visual technology. Their combination of staged activities and unscripted everyday scenes puts the intimate question of how we construct the self into the wider realm of the city as theatre set.

In Staged there is first the issue of whether, at any particular moment, we are watching a scripted action or a spontaneous event. That in itself forces us to ask how much staging and knowingness can inform the apparently spontaneous event. The writer Steve Rushton notes how today we live in a world of self-performance. Our gestures, our gait, our vocabulary and style of speaking are all composites of things we pick up from films, adverts, television programmes, music, dance and sport events. Certainly humans have always been imitative, but in a world where we are saturated with images and models of behaviour, that process has accelerated enormously. Meeting a stranger today involves a complex process of decipherment in which we interpret their fashions, their accessories and technologies, and their repertoire of physical and verbal gestures. Discerning exactly what might be genuine and what is acquired to mask or modify the image of the self requires us to consider that the ‘genuine’ may now be the specific presentation of these various truths, deflections, masks and gestural acquisitions. It is the particular cocktail of cultural quotations that we have to scan, rather than search for something ‘true’ beneath that surface. If that is the case, then the apparently spontaneous event caught by Staged may be just as much a performance as the scripted actions. Placing this within the wider context of the city of Edinburgh, with multiple layers of history embodied in its architectural fabric, opens a larger question of the city as theatrical backdrop or even the city performing versions of itself. This is, after all, a city filled with great buildings that

have lost their original function (including the Observatory). The growth of tourism has seen many of the buildings re-enacting, to a greater or lesser degree, their past for the benefit of visitors as the city poses internationally, presenting multiple versions of its success. The Edinburgh Theatre Festival, of course, is a high point within this history, emerging in 1947 to symbolise a new post-war spirit just as tourism itself became a new cultural force. In a vertiginous moment each year, the city is filled with performances in all sorts of buildings and in the streets, within the confines of a city that itself is engaged in a vast performance. This is the phenomenon of contemporary urban space across the world in which spectacle and theatre have been the guiding forces in design. Viewing this spectacle in Staged draws all of these implications to the surface. It may also, however, induce a sense of distance in the observer – the almost god-like ability to watch over daily life that is so seductive in a camera obscura. At that remove, the figures we see enacting everyday scenes appear small, ant-like in their intent, and slightly melancholy. The astronomer Carl Sagan described the ultimate version of this experience after it became possible to view the whole earth from space:

The Earth is a very small stage in a vast cosmic arena. Think of the rivers of blood spilled by all those generals and emperors so that, in glory and triumph, they could become the momentary masters of a fraction of a dot…Our posturings, our imagined self-importance, the delusion that we have some privileged position in the Universe are challenged by this point of pale light… Scientists now, of course, are moving closer to the notion of a multiverse – many universes existing in parallel, sometimes in ignorance of each other, sometimes intersecting. The physicist Richard Feynman also posits the possibility of multiple histories of the same event all having a real existence. In a world where each person enacts a composite of many influences, thefts and quotations and in which each person can record multiple versions of their lives through phones, cameras, social media sites and fashion, Feynman’s idea seems already clear. Staged, in all its ambition, responds to these teeming worlds. 7

Collective is committed to supporting new visual art through a programme of exhibitions, projects and commissions. Originally established as an artist run organisation in 1984 the Collective is an international organisation for the production, research, presentation and distribution of contemporary art and culture with a specific focus on new visual art and practices. We aim to foster, support, and debate new work and practices in a way which is of mutual benefit to artists and audiences. 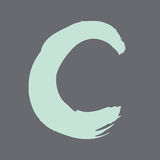