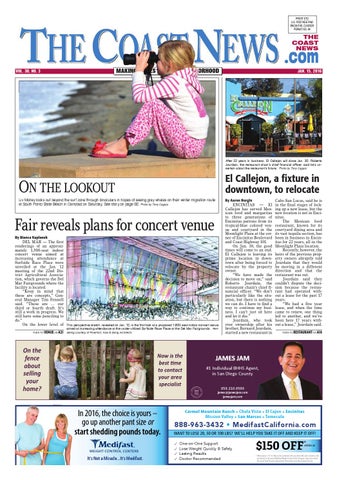 El Callejon, a fixture in RANCHO downtown, to SFNEWS relocate

On the lookout Liv Morley looks out beyond the surf zone through binoculars in hopes of seeing gray whales on their winter migration route at South Ponto State Beach in Carlsbad on Saturday. See story on page B2. Photo by Tony Cagala

DEL MAR — The first renderings of an approximately 1,900-seat indoor concert venue aimed at increasing attendance at Surfside Race Place were unveiled at the Jan. 12 meeting of the 22nd District Agricultural Association, which governs the Del Mar Fairgrounds where the facility is located. “Keep in mind that these are concepts,” General Manager Tim Fennell said. “These are … our third or fourth draft. It’s still a work in progress. We still have some penciling to do.” On the lower level of This perspective sketch, revealed on Jan. 12, is the first look at a proposed 1,900-seat indoor concert venue TURN TO VENUE ON A21

ENCINITAS — El Callejon has served Mexican food and margaritas to three generations of Encinitas patrons from its tropical-blue colored venue and courtyard in the Moonlight Plaza at the corner of Encinitas Boulevard and Coast Highway 101. On Jan. 30, the good times will come to an end. El Callejon is leaving its prime location in downtown after being forced to relocate by the property owner. “We have made the decision to move on,” said Roberto Jourdain, the restaurant chain’s chief financial officer. “We don’t particularly like the situation, but there is nothing we can do. I have to find a way to continue my business. I can’t just sit here and let it die.” Jourdain, who took over ownership after his brother, Bernard Jourdain, started a new restaurant in

Cabo San Lucas, said he is in the final stages of locking up a new lease, but the new location is not in Encinitas. The Mexican food restaurant, known for its courtyard dining area and its vast tequila section, has been in business in Encinitas for 22 years, all in the Moonlight Plaza location. Recently, however, the heirs of the previous property owners abruptly told Jourdain that they would be moving in a different direction and that the restaurant was out. Jourdain said they couldn’t dispute the decision because the restaurant had operated without a lease for the past 17 years. “We had a five year lease, and when the time came to renew, one thing led to another, and we’ve been here 17 years without a lease,” Jourdain said. TURN TO RESTAURANT ON A16