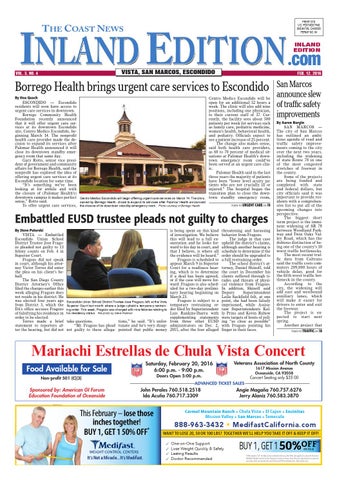 Centro Medico Escondido will be open for an additional 32 hours a week. The clinic will also add nine positions, including one physician, to their current staff of 37. Currently, the facility sees about 500 patients per week for services such as family care, pediatric medicine, women’s health, behavioral health, and podiatry. Officials expect to see a patient increase of 25 percent. The change also makes sense, said both health care providers, as 60 to 70 percent of medical situations at Palomar Health’s downtown emergency room could’ve been served at an urgent care clinic. Palomar Health said in the last three years the majority of patients have been “lower level acuity patients who are not crucially ill or injured.” The hospital began the transition plan to close the downtown standby emergency room, TURN TO URGENT CARE ON 10

VISTA — Embattled Escondido Union School District Trustee Jose Fragozo pleaded not guilty to 13 felony counts on Feb. 4 in Superior Court. Fragozo did not speak in court, although his attorney Victor Torres did enter the plea on his client’s behalf. The San Diego County District Attorney’s Office filed the charges earlier this week alleging Fragozo does not reside in his district. He was elected four years ago from District 3, which the DA’s office accuses Fragozo of falsifying his residence in order to be elected. Torres made a brief statement to reporters after the hearing, but did not

is being spent on this kind of investigation. We believe this will lead to a full exoneration and he looks forward to his day in court, and that I believe, is where all the evidence will be heard.” Fragozo is scheduled to appear March 9 in Superior Court for a readiness hearing, which is to determine if a deal has been agreed, or if the case will move forward. Fragozo is also scheduled for a two-day preliminary hearing beginning on March 23. Fragozo is subject to a temporary restraining order filed by Superintendent Luis Rankins-Ibarra with supplementing statements from three other EUSD administrators on Dec. 2, 2015, after the four alleged

threatening and harassing behavior from Fragozo. The judge in that case upheld the district’s claims, although another hearing is schedule to determine if the order should be upgraded to a full restraining order. The school district’s attorney, Daniel Shinoff, told the court in December his clients suffered through tirades and threats of physical violence from Fragozo. In addition, Shinoff said Deputy Superintendent Leila Sackfield felt, at one point, she had been falsely imprisoned, while Assisatant Superintendents Kelly Prins and Kevin Rubow were targets of bouts of yelling “as close as possible” with Fragozo pointing his finger in their faces.

SAN MARCOS — The city of San Marcos has outlined an ambitious agenda of road and traffic safety improvements coming to the city over the next two years, including the widening of state Route 78 in one of the most congested stretches of freeway in the county. Some of the projects are being funded and completed with state and federal dollars, but city officials said it was important to provide residents with a comprehensive list to put all of the upcoming changes into perspective. The biggest short term project is the imminent widening of SR 78 between Woodland Parkway and Twin Oaks Valley Road, which has the dubious distinction of being one of the county’s 10 worst traffic bottlenecks. The most recent traffic data from Caltrans said the traffic costs commuters 209,000 hours of vehicle delay, good for the fifth worst traffic bottleneck in the county. According to the city, the widening will add east and westbound auxiliary lanes, which will make it easier for drivers to enter and exit the freeway. The project is expected to start next spring. Another project that TURN TO TRAFFIC ON 18