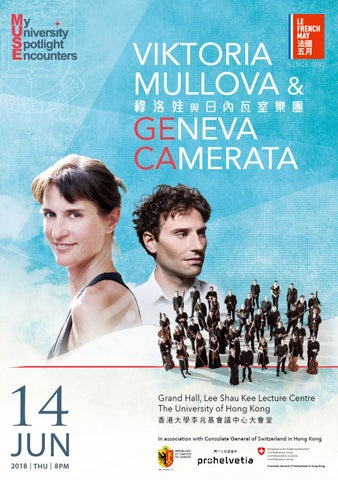 to the Grand Hall.

Thank you for coming to the concert. To ensure that everyone enjoys the music, please switch off your mobile phones and any other sound and light emitting devices before the performance. Unauthorised photography and audio / video recordings in the Hall are prohibited. Enjoy the concert and come again.

In association with Consulate General of Switzerland in Hong Kong

Please scan the QR code to complete the online survey which will only take you a minute. Your valuable feedback would help us continue to improve our future events! We greatly appreciate your time and effort.

DAVID GREILSAMMER, Music and Artistic Director Known for his eclectic and fascinating programmes, conductor and pianist David Greilsammer is recognised as one of today&#39;s most audacious classical artists. The New York Times has recently awarded two of David Greilsammer&#39;s albums as Recording of the Year, in addition to selecting his solo recital &#39;Scarlatti:Cage:Sonatas&#39; as one of the ten most important musical events of the year. Known as a unique interpreter of both baroque and contemporary music, David Greilsammer is also celebrated for his Mozart performances. He has performed in Paris all of Mozart&#39;s piano sonatas in a one-day &#39;marathon&#39; and in © Julien Mignot recent years, he has played and conducted in Geneva all of Mozart&#39;s twenty-seven piano concertos, in one season. David Greilsammer has released four recordings on the Naïve label and three prize-winning albums on the Sony Classical label. Since 2013, David Greilsammer serves as Music and Artistic Director of the Geneva Camerata (GECA). With this adventurous ensemble, he gives over thirty-five concerts per season, including international tours that have taken him and the ensemble to venues such as the Berliner Philharmonie, Théâtre du Châtelet in Paris, Kings Place in London, NCPA in Beijing, Oriental Art Center in Shanghai, and Centro Nacional de las Artes in Mexico. David Greilsammer and GECA regularly collaborate with dancers, choreographers, actors, visual artists, as well as jazz, world, rock, and folk musicians. David Greilsammer has recently performed as guest conductor/soloist with the BBC Philharmonic, San Francisco Symphony, Salzburg Mozarteum Orchestra, Hamburg Symphony, Milano La Verdi Orchestra, Orchestre Philharmonique de Radio France, Hong Kong Sinfonietta, Mexico National Symphony Orchestra, and the Tokyo Metropolitan Symphony. He has also given solo recitals at the Wigmore Hall in London, Concertgebouw in Amsterdam, Verbier Festival, Salle Flagey in Brussels, Mostly Mozart Festival in New York, and Kennedy Center in Washington.

BIOGRAPHY VIKTORIA MULLOVA, violin One of the world&#39;s greatest violin virtuosos, Viktoria Mullova&#39;s musical horizons continue to expand. She has journeyed into the world of jazz and world music, she works regularly with period ensembles such as Orchestra of the Age of Enlightenment, Il Giardino Armonico, Accademia Bizantina, and Venice Baroque as well as appearing each season with top international orchestras and conductors. Highlights of her 2017-18 season include the world premiere of Dusapin&#39;s &#39;At swim - Two birds&#39; with Matthew Barley and the Netherlands Radio Philharmonic Orchestra (Markus Stenz) and further performances with the Orchestra Sinfonica Nazionale RAI (Henrik Nánási), Gewandhausorchester (Dima Sloboudeniouk), and Orchestre National de France © Henry Fair (Pascal Rophé). She tours Europe with Paavo Järvi and the Deutschekammerphilharmonie Bremen playing Prokofiev Violin Concerto No. 2, the Estonian Festival Orchestra for Brahms &amp; Sibelius Violin Concertos and visits Asia with Geneva Camerata. With Matthew Barley, Paul Clarvis and João Luís Nogueira Pinto, Viktoria performs &#39;Stradivarius in Rio&#39; in various locations. Her most recent project, &#39;Stradivarius in Rio&#39; takes her to South America in which she explores the music of Brazil. A CD of the same name has been enthusiastically received and she is presenting the project in concerts throughout Europe. As well as her own projects, she has also commissioned works from composers such as Pascal Dusapin, Fraser Trainer, Thomas Larcher, and Dai Fujikura. Viktoria either plays on her &#39;Jules Falk&#39; 1723 Stradivarius or a Guadagnini violin.

MARA MIRIBUNG, cello Born in the midst of the Italian Alps, Mara Miribung began studying the cello at the Conservatorio di Bolzano. After completing her music degree at the Guildhall School of Music and Drama in London with Raphael Wallfisch, she moved to Vienna where she participated in many different projects, ranging from solo performances to chamber music concerts. Mara Miribung&#39;s passion for historically informed performance practice led her towards completing a Master&#39;s Degree in Early Music at the Schola Cantorum Basiliensis, studying baroque cello with Christophe Coin and Petr Skalka. A passionate chamber musician, she has given concerts with many groups all over Europe, South America, and Asia. In addition, she has collaborated with numerous orchestras, including Kammerorchester Basel, Geneva Camerata, Kammerakademie Potsdam, Balthasar Neumann Ensemble, Camerata Varabile, Lautten Compagney Berlin, and Orchestra Ensemble Kanazawa. An eclectic and curious artist, she has also participated in various musical theatre plays, such as Inferno in 2017, and The Girl from the Fog Machine Factory in 2018. Mara Miribung is based in Basel, Switzerland.

Biographies provided by the artists

This year, the entire world marks the 100th anniversary of the passing away of one of the greatest composers of history, Claude Debussy. At the start of the 20th century, this ingenious and unique composer invented a completely new musical language, while continuing, at the same time, to develop the extraordinary legacy of the French tradition. The piece you will hear tonight was written in 1909, as part of a collection of twenty-four Preludes for piano solo. Fireworks is a revolutionary piece in many ways, but first and foremost in its audacious harmonic and rhythmical exploration: indeed, Debussy decided

to completely detach himself from the traditional harmonic rules and rhythmic structures, offering us a piece that is almost completely abstract. However, even in this abstraction, we can still recognize Debussy&#39;s personal language: a dreamy atmosphere, elegance, and clarity in every chord, as well as shiny and brilliant colours. This piece was composed as a tribute to the celebration of France&#39;s Independence Day â&amp;#x20AC;&amp;#x201C; listen carefully and you will hear the blasting explosions of the imaginary fireworks, and, at the very end of the piece, a little fragment from the &#39;Marseillaise&#39;, France&#39;s national anthem.

Allegro molto appassionato Andante Allegretto non troppo - Allegro molto vivace One of the greatest masterpieces of the German Romantic era, Mendelssohn&#39;s Violin Concerto in E minor was originally composed for one of the most famous violinists of the time, Ferdinand David. This renowned soloist did not only give the world premiere of this concerto in Leipzig in 1845, but also followed the entire compositional process, by frequently visiting his friend Mendelssohn and closely working with him - offering him precious advice on how to make the piece even more impressive, captivating, and attractive. From its very first measures, the piece surprises the listener:Â instead of the traditional introduction that was usually played by the orchestra in every concerto

of the time, the composer presents here the soloist from the very beginning of the piece. After just a few seconds, we already hear the soloist playing one of the most beautiful and moving melodies ever composed in music history. The second movement is a refined, gracious, and intimate Andante in which the soloist plays as if it was a human voice, singing a simple and melancholic song. Inspired by folk music and popular dances, the last movement demands breath-taking virtuosity from the soloist, offering the audience a vigorous, witty, and thrilling conclusion to one of the most popular works of all time.

Variations on themes from Porgy and Bess

GEORGE GERSHWIN (1898-1937) / JONATHAN KEREN (1978-) The Israeli composer, violinist, and arranger Jonathan Keren has been hailed by The New York Times as one of the most important voices of today&#39;s musical world. His works have been performed by the greatest orchestras, ensembles, and soloists around the world, and recorded for prestigious labels. Always interested in jazz and folk music, Jonathan Keren was commissioned by the Geneva Camerata to compose a new piece inspired by musical themes from George Gershwin&#39;s

Beethoven started composing his Eighth Symphony in summer 1812, at a time when he was almost completely deaf. However, despite his deafness, Beethoven astonishingly conducted in 1814 the premiere in Vienna! Somewhat shorter than his other symphonies, this piece is among the most joyous, luminous, and festive that Beethoven ever wrote. The first movement is a radiant Allegro, full of spirit, liveliness, and brilliance. The second movement sounds very much like a comic scene from an opera, with various funny characters appearing at different moments. We can certainly hear in this music the influence of another great composer who lived at the same period, Rossini. The third movement is a minuet, a

kind of dance that was very popular in the Baroque and Classical era, however, during Beethoven&#39;s time, the minuet was not very much in fashion anymore â&amp;#x20AC;&amp;#x201C; it had been replaced by the waltz. The minuet composed for this symphony is indeed not a traditional one: it is filled with many rhythmic and harmonic surprises. In the fourth movement we can certainly hear the influence of Beethoven&#39;s teacher, Joseph Haydn, who had died just a few years before the composition of this piece. This movement, which seems to have been inspired by German folk dances, ends with tremendous excitement, demanding extraordinary virtuosity from each musician of the orchestra.

THANK YOU for your continued support throughout the year. From the epic 8-part Beethoven sonata cycle to Handel’s Messiah Sing-Along. From the eclectic Makrokosmos Quartet to Jeremy Denk’s notes of profundity. We hope you have enjoyed our programmes and can’t wait to see you next season!

“The outstanding Bach pianist of her generation” - The Sunday Times

Music in Words series and lecture-recitals How to join:

Our hassle-free membership registration requires nothing more than 2 simple steps:

1. Fill in the online enrollment form 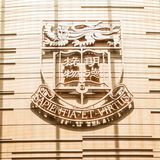