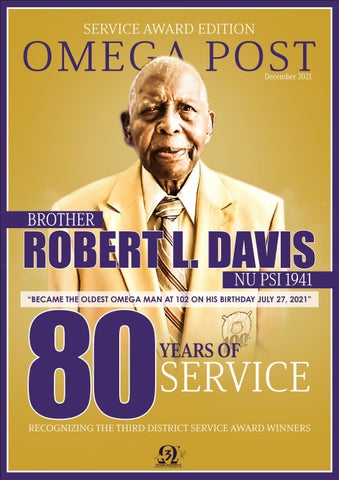 MESSAGE FROM THE DISTRICT REPRESENTATIVE

MORGAN Greetings Brothers of the Third District, Congratulations to all the Brothers who have reached the Fraternity’s years of service milestone. We thank you for your stedfastness and commitment to It is with extreme enthusiasm I greet you in the name of our Lord and Savior Jesus Christ. I am humbled and honored for the opportunity to serve as the District Representative for this premier district in the Omega Psi Phi Fraternity, Incorporated. The district continues to grow and exercise the Fraternity’s cardinal principles (Manhood, Scholarship, Perseverance, and Uplift). I am excited to say we are represented by 43 chapters and 2100 Brothers living their creed and unselfishly providing support to our communities. Being “The Birthplace of Omega” and working together as noble Omega Men, we continue to strive and persevere through the challenges presented by the COVID-19 virus. We continue to make the difficult look easy, as demonstrated by our efforts and ingenuity to ensure we are continuing to meet the needs of the fraternity and community. Our use of innovation and technology is unmatched, as exhibited by our record-setting increased attendance at our events. Our 88th Annual District meeting was a huge success. We celebrated and honored our chapters, brothers, youth, and citizens for their outstanding service to the fraternity and humanity. Brothers, our district and chapters continue to be recognized on the Fraternity’s international level for our unwavering leadership and excellent service. We recorded the largest donation for St Jude, both district and chapter in the fraternity. Brothers and chapters were honored with the highest awards in various categories during the Fraternity’s international Achievement Week, Social Action, and Scholarship ceremony. Congratulations to all awardees, as you are truly deserving of all your accolades. We pray for your continued success, health, and strength as you continue to make sacrifices to provide ongoing unselfish service. May God continue to bless you, your families, the Third District, and the Omega Psi Phi Fraternity, Incorporated. Our prayer is for all to be comforted, remain safe and healthy. The COVID virus may have impacted us all in one way or another. Please continue to be safe, especially with the onset of the new COVID Variants on the rise. Fraternally, Conrado B. Morgan Third District Representative

rother Andrew P. Corley Jr. is a proud product of Irmo, South Carolina. He was born on April 18, 1923. He is the son of Andrew and Lucille Corley. He started his life on a farm, just like many others in South Carolina. He was later blessed to attend the great South Carolina State University, where he pledged the illustrious the Omega Psi Phi Fraternity, Incorporated – Xi Psi Chapter. In 1941, he was drafted and served in the US Army. He served honorably in WWII. After leaving the military as a veteran, he joined the US Postal Service and became a leading supervisor for the service. In the 1950’s, he became one of the first black real estate brokers in Washington, DC. He later went on to serve under the Mayor Barry administration – Real Estate Commission, mentoring such notables like Mr. Donald Pebbles. Brother Corley, a community man and dedicated husband to the late Angie King Corley, has served the community well. He continues to love the Omega Psi Phi Fraternity, Incorporated and the mission that we faithfully are devoted to as men.

Born July 27, 1919 in Franklin, Virginia Attended Virginia State University 1938-1942, BA Pledged Nu Psi Chapter, Omega Psi Phi Fraternity Inc. in 1941 Joined U.S. Army, circa 1942-1945 Participated in the Landing at Normandy, Omaha Beach Graduated University of Wisconsin circa 1949, MA Landscape Architecture Coursework at University Iowa, Horticulture; Cornell University in Landscape Architecture and Modern City Planning • Taught Landscape Architecture at Prairie View University, circa 1951- 1956 • Landscape Architect, Assistant Director for Development, Washington, DC Public Housing Authority, circa 1956-1963 • Landscape Architect, Foreign Service Officer, U.S Department of State, circa 1964-1989, retired In addition, Brother Robert Davis was the first practicing African American landscape architect in the country. He traveled all over the world from 1984-1989 and retired from the U.S. Department of State’s Foreign Service. Brother Davis, is a lifetime member, and at 102 years old makes him the Oldest Omega Man in the world, according to the official records of the Fraternity. Currently, Brother Davis is a proud active member of the Alpha Omega Chapter of the fraternity’s 3rd District. The guest of honor closed the call by thanking everyone for celebrating him and stated we added years to his life! The Men of Omega Salute and honor this man of Omega Caliber today!

rother Charles W. Hargrave was born and raised in Dandridge, Tennessee, but has been a Washingtonian since 1962. Since moving to Washington, D.C., Brother Hargrave has shown his commitment and enthusiasm for D.C. by lending his time and effort to his community in various leadership roles. Brother Hargrave has served as: President of the Southwest Neighborhood Assembly; The Advisory Neighborhood Commissioner for five terms; the Chairperson of the Advisory Neighborhood Commission for one term; the Chairperson of the 1st District Police Advisory Council; the Area Representative for the D.C. Board of Election; and the Treasurer and Executive Board Member of the Friends of Southwest, D.C. In 1969, Brother Hargrave married the love of his life, the beautiful Mrs. Iona (Taylor) Hargrave. The two celebrated 51 years of matrimony in 2020. Brother Charles W. Hargrave is a Johnson C. Smith University (JCSU) alumnus, class of 1949, with a major in chemistry. While attending JCSU, Brother Hargrave became a dedicated member of Omega Psi Phi Fraternity, Inc. (Rho Chapter) in 1946. He also served as manager of the men’s basketball team and served on the student council for two years. In 1952, Brother Hargrave obtained a Master of Arts degree from the Washington University in St. Louis (Missouri). Brother Hargrave had many years of honorable service in the U.S. Military. He served from 1952 to 1954 in the U.S. Army during the Korean War. During his service in the U.S. Army, Brother Hargrave held the position of Health Physicist in the Army Chemical Center. From 1955 to 1989, Brother Hargrave served in the US Navy Reserve. During his tenure in the US Navy Reserve, Brother Hargrave served as Commanding Officer for two units and as the Historian for the National Naval Officers Association. After 34 years of service, Brother Hargrave retired as a Captain. In 1962, Brother Hargrave moved to Washington, D.C. Once there, he began working at the National Aeronautics and Space Administration (NASA). He retired from NASA in 1989 after 27 years of dedicated Federal Government service as a Technical Information Manager. Brother Hargrave has shown his dedication to his alma mater by holding the positions of President and Vice President of the Johnson C. Smith University D.C. Alumni Chapter. On the national JCSU alumni level, Brother Hargrave also served as 1st Vice President, Treasurer, and Chaplin. In addition, He has been a member of the Westminster Presbyterian Church of D.C. since 1968. Since becoming a member in 1968, he diligently served on three National Capital Presbytery committees as the Chair: the Committee on Representation, the Committee on Higher Education, and the Committee on Particular Constituencies. At the Senate Level, Brother Hargrave served as the Chair of the Committee on Representation. At the National Level, in 1987, he served as the Commissioner to the General Assembly of the Presbyterian Church, USA. Lastly, Brother Hargrave currently serves as the chairman for the Senior Brothers committee (composed of 100 brothers with 50 years or more of service) in the Alpha Omega chapter of Omega Psi Phi Fraternity, Inc.

harles Vernon Smith is a dedicated Brother and has been selflessly serving the Omega Psi Phi Fraternity for 70 years. He is a Charter member of the Omicron Kappa Kappa in the Reston/Herndon area located in Fairfax County, Virginia. He has held several offices spanning from the first Keeper of Records and Seal, Vice Basileus, Chaplain, and he expertly chaired the first Social Action Committee of the Chapter. Brother Smith received the Chapter’s Founders and Citizen of the Year Awards, respectively in 2020. Brother Smith was also instrumental in founding the Xi Nu Chapter in San Jose, California and the Psi Nu Chapter in Alexandria, VA. He was initiated at Theta Sigma Chapter – Dillard University in Louisiana in the fall of 1951, while completing his undergraduate studies in Mathematics. He earned a Master’s Degree in Cybernetic Systems from San Jose State University, School of Engineering in 1968, where he served as an Assistant Professor for several years. He was induced into the U.S. Army in 1953 and served as a Fire Direction Specialist in Division Artillery, 82nd Airborne Division at Fort Bragg, North Carolina. After receiving his Bachelor’s Degree, he worked for the Department of the Navy as a Research Mathematician for fifteen years. He transferred to the Office of Surfacing Mining, U.S. Department of the Interior (DOI) as a Division Manager in 1970. While working at DOI, he was honored as the Lone Civilian Candidate to attend the U.S. Army War College at Fort McNair, Washington, DC where he completed the Army’s Advanced Management Program. His years of service as a Research Mathematician lead him to return to teaching as a visiting professor in the School of Engineering at Howard University. Following that assignment, he was asked to design and implement a Mathematics curriculum at the Integrated Design and Electronic Academy, Public Charter School (IDEA PCS) in Washington, DC. While there, he served as Head of the Math Department for 10 years. Brother Smith has received countless awards for his contributions in math, science, and teaching. His passion has always been to teach mathematics to students on all aptitude levels at the Academy he founded and operates at the Heritage United Fellowship Church of Christ in Reston, VA. A significant number of his students have benefitted from his unique teaching methods and have progressed to prosperous and viable professional careers. Brother Smith was a founding member of the Martin Luther Foundation, Vice President, and longstanding board member of the Reston Optimist Club and the American Legion, Post 125. He was also a County Commissioner from 1995-2020. Before changing his membership to the Heritage United Fellowship Church of Christ in Reston, VA. In 1998, he was a founding member and Deacon of the United Christian Parish in Reston, VA. Today, he’s semi-retired and is the President of a consulting firm licensed to do business in the Commonwealth called OverSmit, Inc. He still makes time to enjoy tennis, golf and boating. Joyce Overton Smith has been by his side as his beautiful and supportive spouse for 63 years, they had a son, who unfortunately passed away in 2020, two wonderful daughters and four bright and shining grandchildren.